Did the Body Test with the Wii. I’d gained .4 lub. My tremor took over and I couldn’t click on the numbers in the peripheral vision test so I ended up in the high 40s for my Wii Fit age.

DD emailed she and her SO had errands to run so she’d call later if that was okay. It was. I hadn’t had breakfast yet.

Ate and waited for the call. When it got to be after 5, I went in and took a shower, the first I’d had with the chair. In spite of being able to sit down for it, I was so weak after that I was shaking like a leaf.

It was hard to carry on a conversation with DD. I had to stop often and catch my breath.

The Catz are having to fend for themselves tonight. I couldn’t summon the energy to feed them.

I had to do a breathing treatment this afternoon.

For supper, I dug the rest of one package of stuffed shells out of the freezer and heated them up. I’ve sort of loaded the dishwasher but I had to come sit down again.

I’ve been meaning to post a picture of what happened to DS1 last Wednesday when they were making a delivery. The door to the storage unit they were delivering to malfunctioned and fell right in front of them. It’s a miracle someone wasn’t hurt. 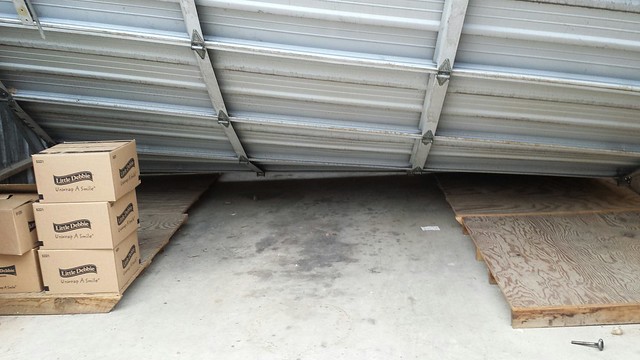 They could’ve called DS2 to come fix it since he does garage door repair and installation.

That’s been about it for my day. I’m hoping to go for rehab tomorrow pending a good night’s sleep. I’m late getting around to taking my cough medicine. I’ll be even later getting to bed.

A Night to Remember
Nausea