It’s another Sunday night and I ain’t got nobody. I got some money ’cause I just got paid…Oh, sorry. That’s supposed to be SATURDAY night. Well, it isn’t so here I am.

I had an SOS from my sister when I got up late this morning. I’d had a rough night with a coughing episode in the middle of it so I was in no hurry to start my day. Anyway, she had called but I either hadn’t heard the phone or it hadn’t rung. At any rate, here’s her voice mail as transcribed by Google Voice:

Hello. I have a problem with my computer. and I don’t know if it’s If it’s legitimate or not, so when you feel like it, please give me a call. [phone number] love you. Hope, you’re feeling better today.

Google Voice is even fuzzier about proper punctuation than I am. Or maybe my name is Hope and I’m being informed.

Since I hadn’t et yet, I was pretty sure I could carry on a conversation without coughing a whole lot so I called her back. Here’s how she described the problem in an email to our other sister and my nephew.

This morning I had a very official looking message from “Microsoft” advising me that my computer had a virus and was in great danger by hackers to get credit card info, etc., etc., and a number to call to take care of it. Failure to do so would result in my computer being shut down (it was already blocked) lest it infect the network (that part sounded really fishy to me).

She went on to say there was a time when she would have called the number but she knew better now. And, as she later said, I guided her through the process of getting rid of the screen (press Ctrl, Alt, Del; choose Task Manager, then shut down applications). For good measure, I had her restart her computer and she was good to go. It’s sad that there are people in the world who are so dishonest as to do things like that. I definitely feel more secure with Windows 10.

While we were talking, I noticed a message on Facebook from Cuz. She wanted to know if I was up yet. I told her yes. I was still on the phone with my sister when I went to the door and there Cuz wuz.

After I’d hung up, she showed me what she’d brought me. There was the Ben & Jerry’s ice cream (Chocolate Fudge Brownie and P.B. & Cookies), more cones and toilet paper. She’d gotten Great Value “hip ribbon” (as DH’s brother called it) which is nice but it costs more than what I’ve been buying. I was looking on Walmart’s web site and couldn’t find it when it dawned on me I’d taken a picture of it when I first started using it. Oh! the days of digital!! 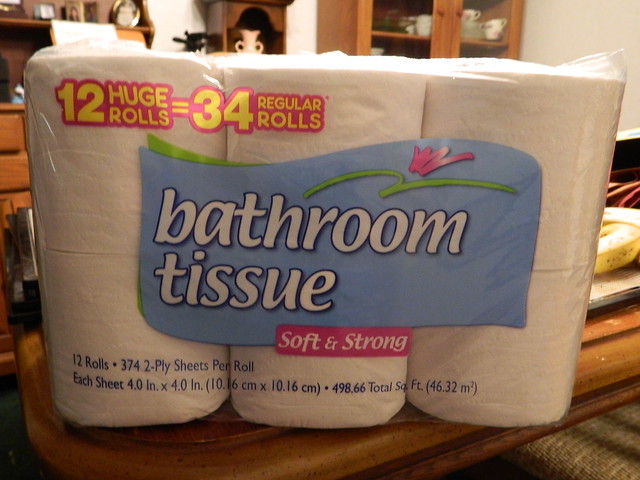 I always buy the giant size package since I use so much.

She’d fed the Catz so I didn’t need to do it again until this evening.

After she left DD called. I was otherwise occupied so I called her back when I was free. We had a good visit for a little more than an hour and a half. She told me her tomato plants have blossoms but no tomatoes yet. That’s so foreign to me since tomatoes are coming in here. She had bought some green tomatoes to fry and that sounded so good! Since her SO doesn’t like them, she’ll have them all to herself. So jealous!

Cuz texted later and wanted to know if I like turnips. I said yes but not to bring me too many! If there is a lot of something, I feel overwhelmed and just look at it until it rots. She’d picked two gallons of blackberries and was busy making jam. She’s looking into making me some vegan pancakes. I’ll have to introduce her to aquafaba.

Today is my sister’s birthday (not the one with the computer problems — hers was the 6th). She’s that many years old and goes to the gym several times a week. Her normal activities include washing and waxing the car, washing windows and walls, mopping, vacuuming, cooking, working in the church clothes closet most Sunday mornings and various and sundry other things. It makes me tired just to read her emails!

The fund is at 75% of the goal. There’s some more to be added from PayPal which will bring it up, too. It’s amazing that the little donate button has been sitting down there at the bottom of each page and had only been used once until the portable concentrator fund was started. That one time was when my sister donated. Now, 17 more people have clicked on it and donated. I’m blessed.

I think I’ve had enough excitement for the day. I’ll sign off now. Over and out.

I Messed Up
Monday All Over Again