Saying I feel better today is a stretch. I feel somewhat better. Even that is exaggerating a bit but I’ll let it go.

I’d had my shower and razored my neck before my nurse friend got here to give me my shot. When I told DD I was going to use the razor to clear the unwanted hair, she sounded alarmed and said, “Be CAREFUL!” I guess she thought I was going to use a straight razor or something. As it was, I’d gotten out a new disposable one and managed to nick my neck, anyway.

When I’d bared my arm for the shot, my nurse friend commented that it looked as though I am losing weight. I told her I have. I guessed around 10 lubs but I looked today and it’s just over 8.5 since May 6. I went on oxygen full time on May 7 but I hadn’t done a body test that morning.

She’d brought my mail and my O2 Ear Buddies finally came. My visor had come on Monday so I’m set for the next time I have to go forth and do.

Later, I looked out and Black Tom was taking his ease in the chair on the deck. This picture shows some of his battle scars without being so close. 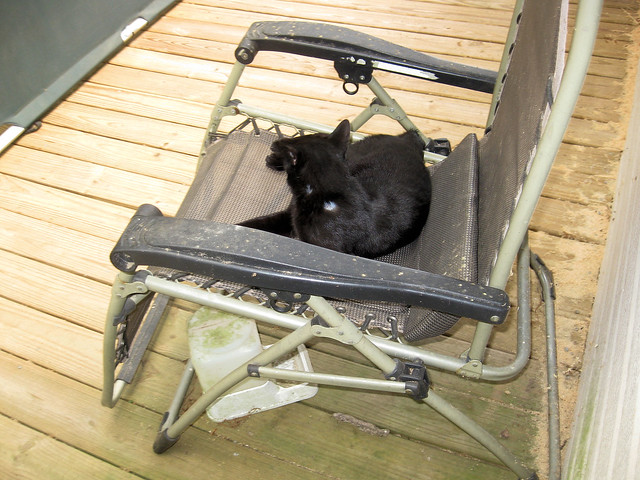 I meowed at him and he looked around like, “What??” 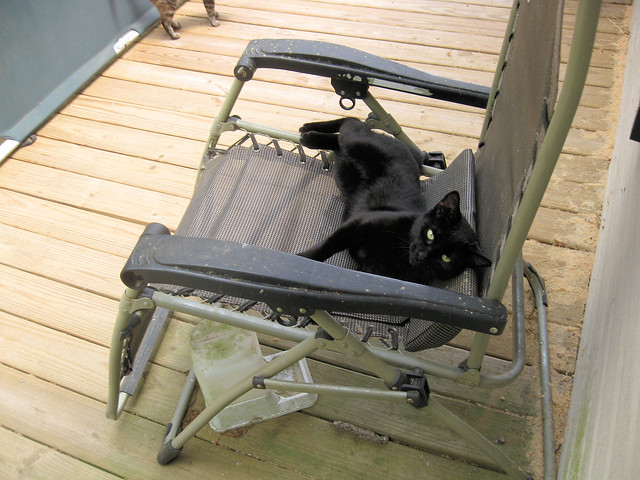 Then he went back to reclining and didn’t even raise his head when I said something. 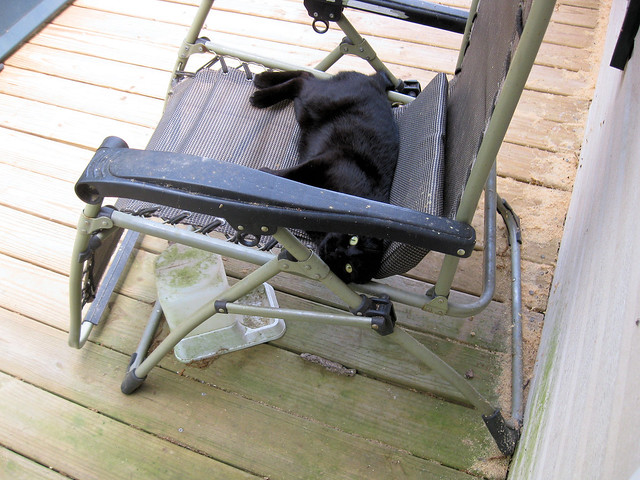 Cuz came by and brought the groceries I ordered. I hadn’t specified how much corn so she’d gotten two four ear packages. I have a hard time using one. She said to freeze it but I don’t want to go to the trouble. The way I feel, the path of least resistance is the one I take. She’d gotten Del Monte bananas and they could sub for baseball bats.

The first two mobile lessons were complete but the linking bothered me. It wasn’t consistent with what I would be doing in the rest of the lessons. I deleted all the links that were different and replaced them.

I was already not feeling good but the day went downhill fast from there. I got everything put away and then collapsed. I did bake a potato and an ear of corn wrapped in foil. It was after I ate that I had the major coughing spell.

That wore me out to the point that I brushed my teeth but I didn’t Waterpik or floss. That rarely to never happens. I was in bed much earlier than the night before and I slept well.

After daylight, I got up and took my thyroid meds and went back to bed. I didn’t wake again for a couple of hours. I figured I’d slept most of 10 hours.

The blueberries from ALDI are the very seedy ones. I’ll probably be well cleaned out by the time I eat four pints. I managed a whole banana. It’s better than the Dole bananas but still not as good as Chiquita. Cuz said I should freeze the overripe ones on the counter and make banana bread later. Do I look like I’m going to make banana bread?? I don’t think so!

I’ve got to get enough energy together to empty the dishwasher and put all the dirty dishes in the sink where they’re supposed to go. The pan of compost is full, too. Such simple things that seem so daunting. It isn’t right.

Well, the Donald did another telepromptered speech today that proved one thing beyond the shadow of a doubt. He can read. He also can’t stop himself from ad libbing when he finishes a sentence his speechwriter wrote. Evidently, he didn’t make up any more words but the departure from the script is pretty obvious. Trump on his best behavior isn’t nearly as entertaining. His people may decide they don’t like it when Trump isn’t Trump. I guess as long as it makes the establishment happy…

Wiped
Kids Can Be Mean

2 Responses to A Day Late