Thankfully, I was in bed an hour earlier last night than the night before. I’d read that an increased water intake would thin secretions and lessen coughing so I added 16 ozzies to my usual. It helped. It didn’t completely do away with the coughing but it helped.

When I went out to feed Black Tom and the rest of the Catz, I was looking at BT’s “war wounds”. Coming back inside, I grabbed my camera and went back out to get a shot of his scars. I had to get close because I was petting with my left hand to keep him in place and shooting with the right. It isn’t the best of pictures but it gives an idea of why I felt it was necessary to alter his core instincts. It would be bad enough if these were the only evidence but they’re just several bare spots of many.

Except for one of the aunts, the other Catz accept Black Tom. This one will nuzzle him. 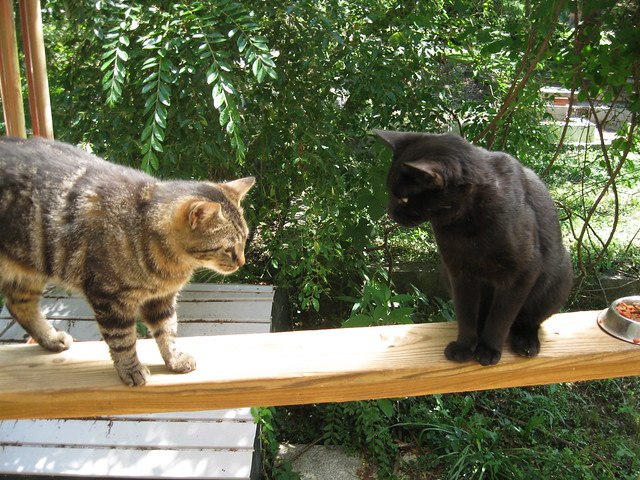 It may have been mean but I thoroughly petted Black Tom this afternoon and then rubbed his smell all over the one that bats at him and hisses. I thought, maybe, she’d get used to the scent and not be so ugly to him. He hasn’t done anything to her, I don’t believe.

For the second day in a row, Gray showed up. It’s a beautiful cat and is getting over its skittishness little by little. This picture is taken much farther away than it appears. I used the telephoto for it. It also shows how badly my deck needs cleaning. 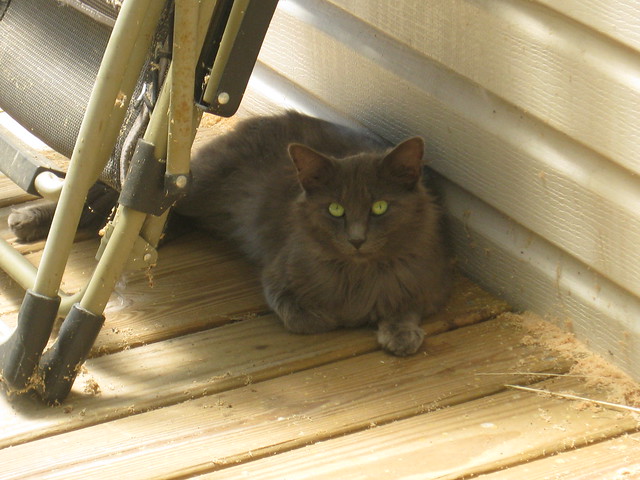 Well, today is a “skip” day for the lessons. I’ve been thinking about going back and working on one and two, too. I may go ahead and do the first one before I sleep.

Someone on the devotional site suggested using a pillow under each arm to make it easier to breathe (several encouraged me to sleep in a recliner but I told them I have a hospital bed). I got out a couple of my extra pillows and I don’t know that they will work. I may not fit between them. I might try my little pillows I use on the love seat and Mother’s chair to see if they make a difference.

Cuz has to go to the Big City tomorrow so I gave her a list for ALDI. I’m asking for any kind of bananas but Dole. I know I talked about bananas in my last post but I’ll tell you why I know bananas aren’t as good as they used to be. When I was a child, the commercial banana was the Gros Michel or “Big Mike”. It really was sweeter and creamier. It also lasted longer. But then it was hit with the Panama disease and all of Central and South America’s crops had to be destroyed.

Enter the Cavendish. It isn’t anything like the Big Mike. The texture is a bit mealy in comparison. The taste is flat with none of the sweet notes of its predecessor. The plants are cloned so each banana is like the one before it. Now, a different strain of the Panama disease is threatening the Cavendish.

Chiquita bananas are generally better than Dole or Del Monte but they are harder to find. ALDI has them sometimes. Since they’re 29 cents a lub this week, I hope they are Chiquitas.

Baby bananas are good but I don’t like to let them get too ripe or they are ‘way too sweet. Just a few speckles and they’re almost perfect.

If I lived in a tropical climate, I would get a Gros Michel banana plant from Amazon. There’s no way it would grow here, though.

The “egg” salad is gone. So is the rest of the Ben and Jerry’s. I was sorry to finish up the Chocolate Fudge Brownie. It’s turned out to be really good.

Well, let’s move on to current events. Trump has fired his campaign manager — who still supports him and says he’ll work to see his former boss elected. He was the one who came up with “Let Trump be Trump”. I guess everyone thought if the Donald told him, “You’re fired!” that would get rid of the influence. Now the Donald can become more Presidential. The thing is, even if he reads from a teleprompter, he’s going to give in to his natural bent to ad lib and say things ending in non-words like “bigly”. Yes. Let’s let Trump be Trump.