Today has been a better day as far as coughing less is concerned. For breakfast, I had a heaping teacup of blueberries, watermelon (edging over the ripe scale), cantaloupe (coulda used another couple of days on the counter), a banana and a piece of seedy-bread toast. Seems it was greeted by less reflux than usual. I’ll have to try it again tomorrow.

Taking advantage of the situation, I made some phone calls. Black Tom has an appointment for snip-snip and I printed off the instructions (no food or water from 10 on the night before, be there by 8:30, pick up at 6) for Cuz. She agreed that he should be picked up and taken to their other place the night before to make sure he complies with the fasting.

Not wanting to repeat Sunday morning, I called the electric department at City Hall. The man told me I needed a letter from my doctor stating I’m on oxygen 24/7. All it would do, for sure, is give me a grace period should I ever get behind on paying my bill. I told him I have budget billing and my account is set up to be paid by bank draft so it isn’t likely that would ever happened. He agreed (people were agreeable today).

I tried to call Dollar Tree but the line was constantly busy. I’ll try that again tomorrow.

While I’m thinking of it, here’s a picture of the cute little monkey Cuz brought me yesterday. 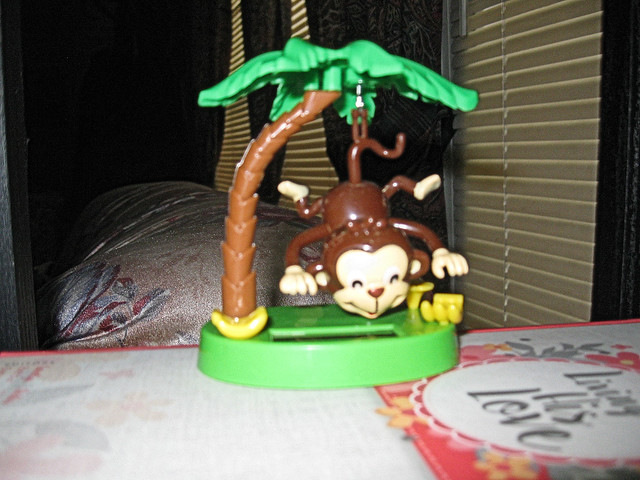 It’s supposed to be solar powered but the light above it is too weak to set it swinging. Besides, the palm tree kind of blocks any light from above. It needs to be in a window somewhere but the blinds on my windows are too hard to get to, to open. Besides, they don’t all work right. As a result, they stay closed. It’s a happy looking little feller, anyway.

Cuz came over a couple of times today. I prevailed upon her to empty the pan of compost. I’d given up and pitched the rest of the 39 cent avocados. The method of putting them in the fridge works well if a person has an appetite to eat them but I’d lost mine shortly after buying them so they were goners. I can carry the pan out, myself, but it’s not easy. For her, it is.

She was getting ready to leave and just before she walked out for the last time, thunder started rumbling. She managed to beat the storm when it was still just sprinkling but, after she left, it opened up and poured. It’s as she said, though. We need the rain.

I’d been wanting some “egg” salad so I mixed up chopped celery, Just Mayo, McKay’s Chicken Style Seasoning, turmeric and kala namak. Opening the package of tofu, I noticed it had a “use by” date of June 10. It wasn’t lying. The stench was terrible. Where I’d gotten the water on my hands, they smelled rank. I washed them with dish washing soap and that took care of that but the smell coming up from the drain was gag-worthy. I washed soda down the sink but it still stank. I solved that problem by plugging up the drains on both sides with a quantity of soda. I’m going to leave it there until I’m sure it’s absorbed all the odor and then wash it down. I put the mixture in the fridge and texted Cuz to bring me some fresh tofu when whoever comes to get Black Tom. I had a Tartex with Herbs sandwich on seeded Niedlov bread and celery.

Cuz brought me more squash and zucchini today and I haven’t gotten around to doing anything with the first batch. If anyone needs some…I asked her how much she thinks one person can eat?

Put me at the computer with an Internet connection and I’m dangerous. I ordered a youth sun visor today and another set of Ear Buddies. I’ll keep the original ones on my headband and put the others on the visor where they will stay. That way, when I want to switch off, it will be easy. I like easy.

Well, Cuz finally let me pay her for the stuff she brought me. She gave me a rough total and I rounded it up to the next $5. Even then, I probably owe her more.

I’m having a hard time staying awake and it’s no wonder once I looked at the clock. It’s late, folks, and I don’t need to be up much longer. “So long, farewell, Auf Wiedersehen, goodnight.” “Goodnight. GOODNIGHT!!”