Cuz brought me her sun visor to try. I’ve worn it for two days now and I need one for children, I think. When she gave it to me, it was adjusted so the Velcro fit nicely in the middle. When I got it small enough for my head and to hold the Ear Buddies high enough, the overlap is like an inch and a half.

In the past, I’ve wondered why “cool” kids wore their caps sideways. Now I know. I have run into more things with the bill and knocked it every time I lifted my hand to scratch my head. I’d need one with a bill that isn’t quite so prominent.

Tonight, I set the camera up on the tripod again and here are the results. 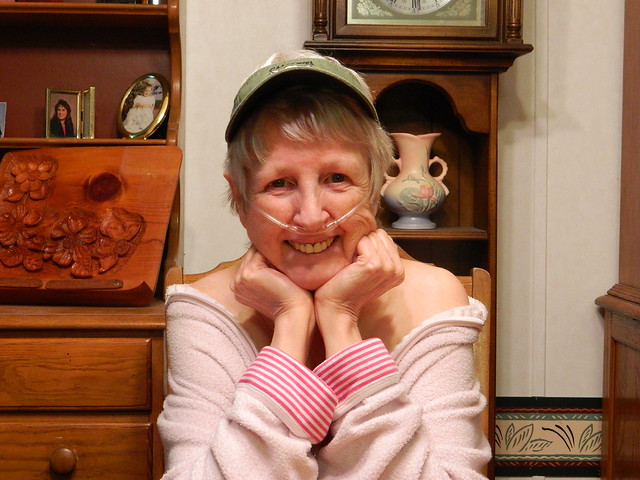 The artwork on the front kind of gets to me since I’m staring the Grim Reaper in the face. Cuz doesn’t know why it bothers me. Maybe it shouldn’t but it does. I’ve never gone in for such. This might be right up DD’s alley, though. She finds death fascinating but not because she wants to try it. 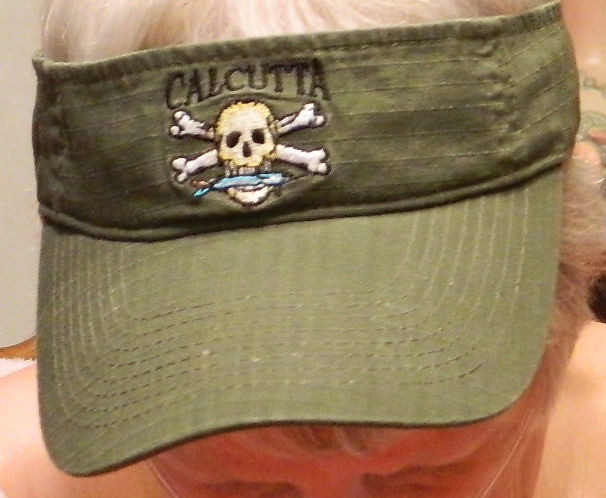 The headband is back on. I can sleep in it and I can’t the visor. That wad of Velcro and fabric is most uncomfortable when my head is put to pillow. It took some doing to get the Ear Buddies off the visor and some more doing to get them on the headband but I persevered.

Then I got the Ear Buddies too far back and I had to reposition them. That just took sliding them around so it was no big deal. All set now.

I wasn’t feeling too swift yesterday but I’d turned down Cuz’ help to make the bed so I was going to do it. Stripping off the sheets and pillowcase were the easy part. Putting them in the washer, adding the soap and turning it on was no big deal. Neither was getting them out and putting them in the dryer.

The BIG deal came when I was putting everything back together. I put the bottom sheet on and got it all positioned according to Hoyle and I had to sit down. A few minutes later, curiosity overcame me (which it often does) and I got out my pulse oximeter. It showed my O2 as 85%. No telling what it was when I first sat down. While I was sitting there with my head back on the chair, I drifted off to sleep. When I woke up, I checked and my O2 sat was 98%. I got up and put the top sheet on and had to sit down again. This went on until I had it all made up including the pillow in the pillowcase.

I had to take a picture to prove it. 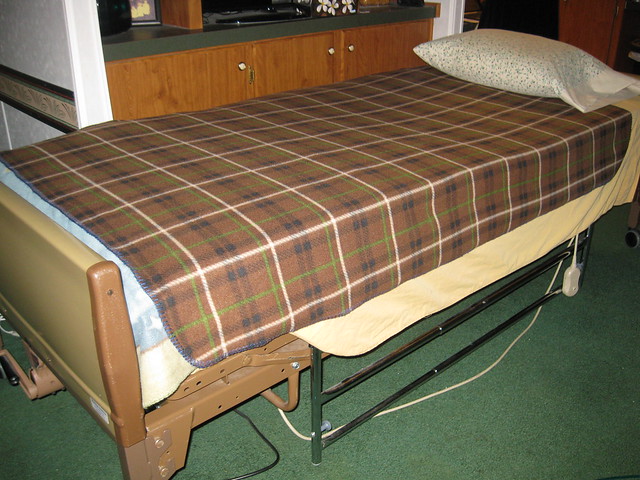 Cuz came in and whirled through the house and made it, more or less, presentable. She sat down and said, “You may have visitors tomorrow.” I said, “I hope not.” She was surprised. “You don’t want anyone to come see you?” I told her I’m tired. I know people mean well but I used to feel so sorry for the patients in the hospital when people would go it and talk at them when they were so down, physically. When you’re all good and perky, it’s hard to relate to how others feel.

I’d called the Animal Hospital and neutering Black Tom won’t be as much as I’d thought it would be. HOWEVER, his shots will be more than the surgery. Cuz gave her go-ahead and I’m to call and make an appointment on Monday. The lady said they schedule a week out so that will give Tom the chance to split again, which I hope he won’t do.

Cuz went home but she came back another time or two. The last time she went out, she took some of the Catz’ food so she could give ’em nibbles when she sits on the back steps in the morning. They congregate and she feeds and pets.

Bedtime was earlier than usual. I woke at 6, went to the bathroom and back to bed. Woke again around 8 and took my thyroid med. Back to bed until 10 when I got up. When I did my Body Test with the Wii, I came in with a Wii Fit Age of 20 for the third time this month. By now, I should have had at least half of the 11 days at 20. At least once, I’ve come in at over 30. YIKES!!

I had my quiet time and ate breakfast. I have one more meal of blueberries and one more banana (I’ve been making banana milk since they’re so ripe) and then I’m out. I’m sure my CIL will do the shopping before long, though.

Black Tom and one of his aunts showed up to be fed. He followed me down the line as I filled the bowls and he insisted on being petted. When I was petting him, his aunt came up so both hands were busy with Catz.

Once again, it was too late for me to get in on the live stream from the university church so I went to a different church site and watched an archived sermon. It turns out it was the message for Communion Sabbath so it was short.

This afternoon, Cuz came in loaded down with bags and a box. I thought, at first, my CIL had shopped today. No, she had stopped at her sister’s house and picked up the cannulas and assorted other things our friend had left there for me. I’d thought it would be a little bag of cannulas from what she’d said but here’s the lot: 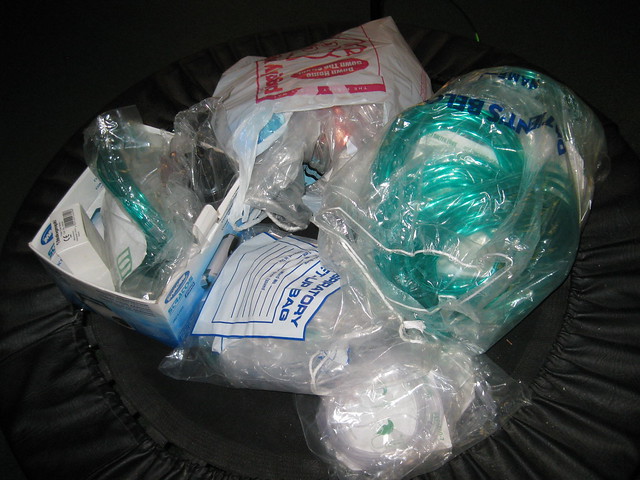 The tubing is mostly 25′ which I can’t use but there’s at least one 50′ that I can. There are piles upon piles of cannulas and even a flowmeter. I’d asked the Torturer (she does the pulmonary function tests at the pulmonologist’s office) if a flowmeter would help me and she looked sad and said no. There are spare parts for a nebulizer like mine so that’s nice. I’d have to live several lifetimes to use up all the Stuff.

All of it is parked on my rebounder. I asked Cuz where we can put all that stuff. She looked mollified and said she didn’t know. I told her it could stay where it is and be a conversation starter.

Well, the second camp meeting is over by now, I guess. Yesterday, I called the man listed on the poster and asked him if it would be live streamed. He seemed surprised anyone would ask. Well, no. They don’t have the capability. I told him I’m physically unable to be there and I’m sure I’m not the only one in this situation. He agreed and said he’d bring it up before next year’s session to see if the conference could get that set up. So…if I’m still alive…

Cuz was in and out several times today. She found a “huge spider” by my bed and picked it up in a paper towel. I told her to put it outside but she did it in and it went into the trash. I like spiders a lot more than I like flies and other flying insects. Just think what the world would be like without spiders…I told her, “Be Nice to Spiders“. Love that book!

The last time she was over, on her way out, she locked me in. So I guess I’m down for the count. Not that it isn’t time. The clock will soon strike 11:30 and I still haven’t had my next to the last 8 ozzies of water.