In spite of having to get up now and then to go to the bathroom, I had a good night. I was so tired, there was no way I wasn’t going to sleep.

Before I had breakfast, I unloaded the dishwasher that I’d finished loading and started last night. That’s another thing to add to yesterday’s activities.

When I did my Body Test with the Wii, I’d lost a lub and a half. Guess knocking myself out to Get Things Done had done more than just accomplish. I was duly bragged on by my Mii. I still have a lub and a half to reach my “goal”. I put that in quotes because I don’t care whether I lose more or not at this point. I do want to keep a little reserve, just in case.

The Catz, including Black Tom (I credit Alice with the capitalization which turns the words into a name) were on the deck, ready to eat. Black Tom still had food in mind more than petting so I gave him a pat or two, petted the others and came back in.

After everything was out of the way, I sat down and started watching John Oliver clips and videos. He’s very interesting. He does drop “F” bombs now and then which I don’t think are necessary but, other than that and an occasional sh*t, he can be fascinating. In spite of that, I started drifting off to sleep. I paused it and let nature take its course. I went as sound asleep as I ever did last night and was out like a light for I don’t know how long. I hope it doesn’t make me stay awake tonight.

One of the videos I’d seen before. It was about a Trump ancestor changing their surname from Drumpf to Trump. It gave a website where a person could go and get a Chrome extension that will change Trump to Drumpf. When I went there, the site has been taken over by a company that makes and sells hats. The Chrome web store has it, though. It’s called the Drumpfinator. I added it and it really does work. As a matter of fact, I had to disable it because it was changing it when I typed it in as “Trump”. 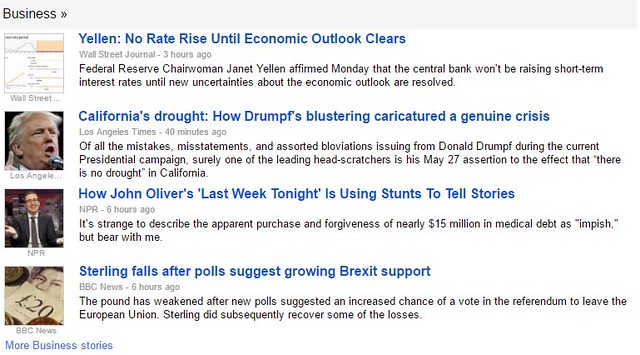 When I went out this evening to feed the Catz again, most were present and accounted for. Six rarely shows up, if she’s still around. I haven’t seen Black Tom’s gray sibling for as long as Tom was gone. There were five of the six regulars and I’m sure the other one showed up later. The neighbor cat is getting bolder. It jumped up on the deck while I was still out there and went behind the cot. I guess it thought as long as it couldn’t see me, I couldn’t see it. Well, I sneaked up on it and got within less than four feet before it realized I was there. It split. I’m sure it came back and ate.

Black Tom asked to be petted that time and when I was stroking his fur, some bare spots were plainly visible. He’s gotten in some fights, for sure. I texted Cuz and told her if someone would take him in to be neutered, I’d pay the bill. He needs to stay home, quit tom-cattin’ around and fathering kittens. If there aren’t any other available females around, he might get hold of his mama and that would be bad.

My friend from church emailed she’d be able to bring me anything I need tomorrow. I still have bananas and blueberries. I couldn’t think of anything but it was nice of her to check.

I’d planned to have at my hair today but, after my late nap, I had to scrap the idea.

Well, the news agencies have gone and done something I wish they hadn’t. They have declared Hillary the Democratic nominee.

If they are looking to raise Bernie’s hackles, this is bound to do it. He’s already begun to sound more and more like Drumpf with his accusations and I’m just about over him. I used to admire him and his courage to hold on to his convictions but he’s turned from being a standard bearer to becoming a grumpy old man. It isn’t endearing. It’s sad that his followers can’t see past him and are holding on for dear life. It’s Bernie or Bust and that’s what just might put Drumpf in the White House and perish that thought. That being said, if Hillary doesn’t have enough pledged delegates and Bernie manages to woo the superdelegates away from her…if he, by some weird turn of fate becomes the nominee, I’ll vote for him in a heartbeat. Anyone but Drumpf!

It’s strange to me how anyone could listen to Drumpf for more than a few minutes and not come away with a sense that this man isn’t quite right. “They” say he tells it like it is, but if that’s what IT is, I want nothing to do with it.

4 Responses to Another Day in the Life