Last night, I had a long exhausting coughing episode. I had to keep grabbing tissue to spit in. This morning, the pile was quite spectacular. I tried my best to get the color right but, as usual, I failed. 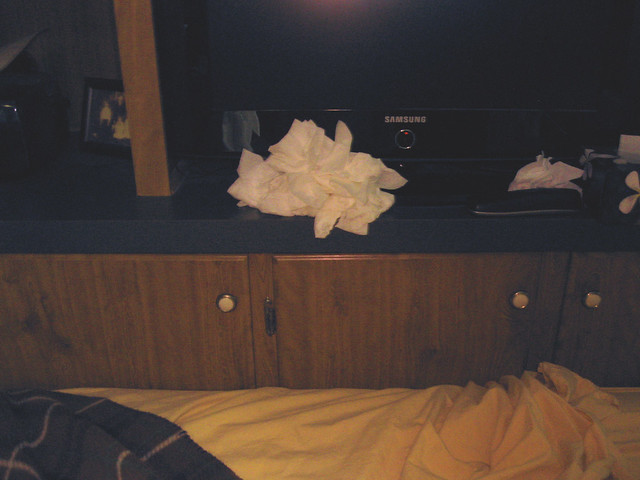 The tissue on the right was a nose-blowing one. The rest are from my coughing marathon.

Besides that, I spent the time in bed with my butt in a hole. It was two months now, I think, since the mattress had been flipped and rotated. I’d do it today or die trying.

I’d written this to my sisters this morning:

My big news of the day is that the black tom is back! He looks like he’s lost weight but okay otherwise. He ate like there was no tomorrow. He finished one bowl including the bits that had fallen on the railing, then went to the next. He was okay with being petted but he was more interested in FOOD. Later, a big dawg was reared up and eating the Catz’ food. I hit the storm door and yelled (reminded me of Mother) and it took off. It probably came back because all of the bowls had been licked clean this evening.

I spent some time thanking the Lord for the safe return of the black tom.

Stripping the bed, I put the sheets in to wash. When I opened the dryer lid when they were finished with the cycle, I didn’t open it all the way and it came crashing down on my hand. Now, when DD was little, she said, “When Dad gets hurt, he yells and screams. When I get hurt, I cry. When Mom gets hurt, she says, ‘Ouch.'” Well, this time, I cried. It hurt and I thought it might possibly be broken but no such luck. Currently, there are two red spots and they’re sore. The skin didn’t even break. I can be thankful for that.

The sheets dried pretty quickly and I had about done myself in flipping the mattress and rotating it. I’d thought I could just stand it up on its end and let it fall but there was no way. That would have cut out a step but I had to do it the regular way.

After I got the bottom sheet on to my satisfaction (I said I’m picky), I sat down to rest. The phone rang and it was DD. We visited for a little more than 45 minutes when she figured she needed to get ready to go visit their property on Whidbey Island. They were going to give merm and her girlfriend the grand tour.

I’d been trying to rouse merm. My sister had alerted me this morning that my website was down. When I forwarded that to merm, there was no response. Finally, I emailed her a fresh, unused, original email and she filed a trouble ticket. It was back online fairly quickly.

After I finally summoned the energy to finish making the bed, I put the few clothes that were dirty in to wash. I figured they needed more than just baking soda so I pushed the temperature to hot. Then I went to take a shower.

It isn’t the smartest thing in the world to have laundry going and expect to have a wonderful experience showering. Once, the hot water cut off completely and I was blasted with cold. After that, I was truly awake.

My hair got shampooed twice and blown mostly dry. It’s been ages since it’s been this long and it’s never been this wild. There’s no way I can go to have it cut so I’ll just either put up with it or take matters in my own hands.

I’m quickly getting over the line from abject fatigue to total exhaustion. That bed is looking awfully good. I think I’ll occupy it soon.

Camp Meeting
Another Day in the Life

4 Responses to Back Home