Hoping against hope, I’d thought that maybe it was something I’d done (like eat cashews) that made me feel the teeniest bit better yesterday. That wasn’t to be. When I woke this morning, I got up, took my thyroid med and crawled back in.

I dragged around most of the day and had to go back to bed for a little over an hour this afternoon. I had a peppermint in my mouth and when I dozed once, I decided I didn’t want to die because I inhaled it so I put it on a piece of tissue. That was the last of my dozing but I did rest.

Then I went back to My Spot. 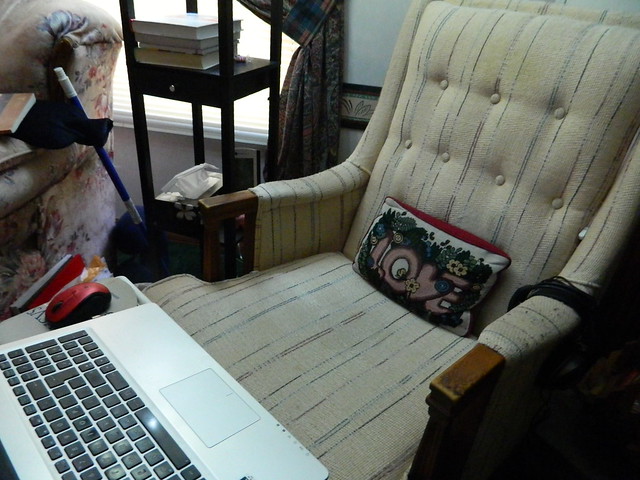 Meet Mother’s chair and the imputer I blog on when I’m up to it.

Sometime this afternoon, I summoned the energy to put the white vinegar Cuz got me to use. I needed to soak the parts to the nebulizer. Spellcheck says I should use “neutralizer”. Well, since that’s wrong, I won’t.

Later, I also washed the pint of blueberries Cuz had brought me on an ALDI special. I ate, maybe, a fourth cup of them and they didn’t taste bad. I cooked some green peas (I’ve been needing some green in my diet) and ate them. They weren’t quite done but, at least, they were the right color. Toasted some more cashews and baked three falafel balls. I could only manage one of the balls and I didn’t think I’d be able to eat all the cashews but I kept nibbling until they were gone. I’ve kept everything down so that’s a blessing. Not that I haven’t before but this is so much more than I’ve been eating. The other two balls are in the fridge.

I’ve been up ever since but I’ve had to lean back and rest frequently. I’ll probably weigh a bit more than the 1.3 lubs less that I did this morning. My Mii keeps bragging on me about my weight loss but I hope it will slow down.

Well, Bernie has plowed into Hillary’s lead by at least nine pledged delegates. I know he’s declared all along that he will stay in the race until the bitter end to give all the citizens a chance to vote but he needs to come out with more of a condemnation of the violence and toxic situation than, “Our campaign of course believes in non-violent change and it goes without saying that I condemn any and all forms of violence, including the personal harassment of individuals.” One sentence out of a much longer press release is not enough. He’s great at expounding. He needs to expound on that.

My granddaughter’s eighth grade graduation is tomorrow night. I’ll attempt to watch the live streaming. I hope it will be better done than it was last year. That’s when my sister’s grandson graduated from the same school and it would sit there and buffer forever until I’d reload. Hopefully, my feedback then will help now.

Feeding time for the Catz came and went and it just occurred to me a few minutes ago it had. I’m sorry but they’ll just have to fend for themselves. Most of them could use a little weight loss so I’m sure they’ll be fine.

The Day After the Day Before
The Graduate