Tomorrow will prove to be either a confirmation or an upset. By this time tomorrow night, we should know which it is and for the candidates in question. Here’s a refresher if you’ve forgotten who they are.

Of course, if you don’t recognize them, it’s because you’ve been living under a rock.

I was a little surprised when the doorbell rang this morning. Cuz has fussed at me for opening the door without asking who’s there first but I did it, anyway. And it was Cuz. She had been running errands since the early early and had everything on her away-from-home list done and was on her way back to take care of the to-do list there.

The Catz hadn’t been fed so we went out to take care of the clowder that was on the deck. The black male had his behind pointed at me and I saw he has a bare spot right above his private parts and next to his anus. Cuz looked at it but I think she was as much in the dark as what it might be as I am. He should go to the vet but I have no desire to fight that fight. Speaking of fights, he should be fixed to cut down on the possibility of his tangling with other toms, too.

As Cuz would say, she’s been “piddling” and building things she doesn’t have time to fool with when she’s working on a job. One of her latest creations was making a wishing well to cover the less-than-attractive well in the yard. 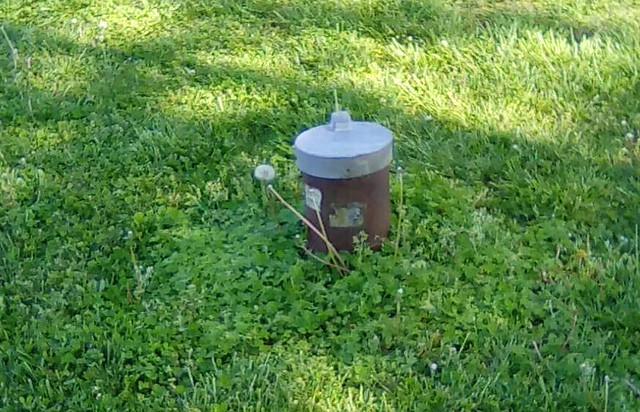 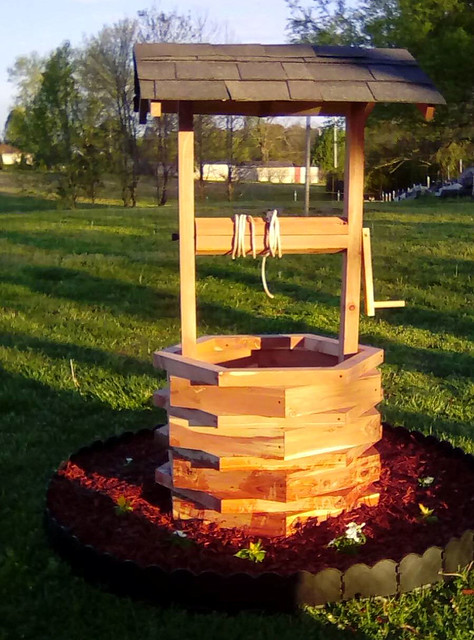 She’d looked for a bucket to buy but she couldn’t find what she wanted. Going into her shop to get something else, she spied a bucket that was perfect up high on a ledge. She got it down and took it home. She had another bucket that had a hole in it but the handle was better than the other one. She took it off, put it on the newly found bucket and now all she needs to do is put the pulley and bucket on the wishing well and it will be finished. Her nephew helped her plant the flowers. 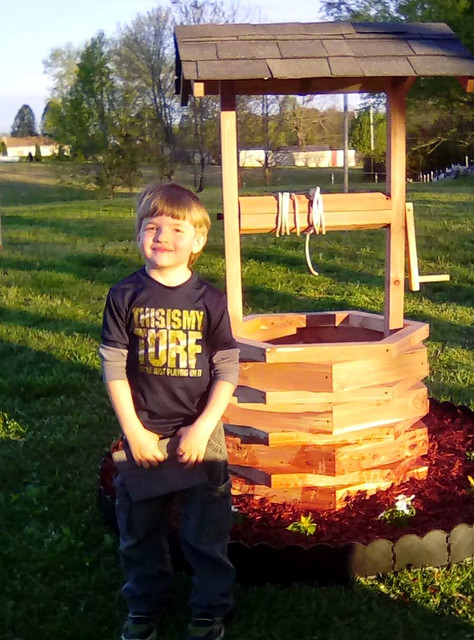 I didn’t ask for permission to post any of these pictures so if she tells me to take them down, I will.

She’s also in the process of building a play table for one of her other nephews. It’s going to be quite a project. His mother wants it to have the track for his train on one side and space for Legos on the other. She said she needed to use biscuits to hold it together. After she explained it to me, I wasn’t so puzzled. Amazon has an assortment here.

It’s been pretty warm today. I had to get out one of my summer dresses and put it on. Tomorrow is supposed to get into the low 80s. The high in the valley today was 88. Here, it got up to 77. It’s dropped 20 degrees since then.

The other bag of caramel corn is an improvement but I won’t be buying any more of it. Another thing, I didn’t tackle the chia seed. My favorite way to eat it is in the coconut chia pudding my dentist’s wife brought me in the hospital. I should make some more soon.

I worked on the next lesson today but not to the point it can be uploaded. I still have to link to the Bible texts on BibleGateway. That’s a rather tedious undertaking and I’m not going to do it tonight.

The HTML expert got back to me on the List of Seven I’d sent him. I think he completely misunderstood what I was saying on he last one. I’ve emailed him again so we’ll see what happens now.

Depending on which county you might live in, the NY polls open from 6a ’til 9p or 12 noon ’til 9p. The Donald’s children won’t be able to vote for him because they didn’t register soon enough. They would have had to register in October. Any Independents who didn’t switch by then can’t vote, either. And the race goes on.

A Day In the Life
New York, New York!