Being of a curious nature, I was intrigued by the colorful sticker on the oranges in the last two bags I bought. The stickers are less than the size of a nickle but bigger than a dime. 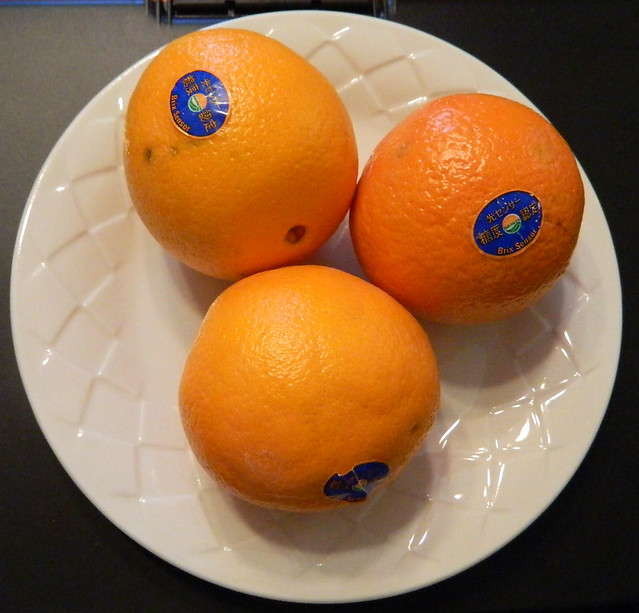 I peeled one off and took it to the light. I could read “Brix Sensor”. Hmmmmmmm. What on earth is that? Ever since Google came into being, it’s been my friend and it didn’t let me down.

This site explains it in more detail than I ever needed. A refractometer is used to measure the amount of light refracted by a juice sample. There’s a lot more to it than that but the result is the grower knows how much of each element is contained in that sample. One of those elements is sugar (it points out that’s mainly fructose). What I’d like to know is why they think that tiny sample represents all of the fruit from that crop or even from one tree? I can pick a sweet strawberry from one plant and a tart one from the same plant. Why is citrus that much different? I know the oranges I bought a few weeks ago were ‘way sweeter than these.

My current supply is Sun Pacific and here’s what they have to say about the Bakersfield facility, which must be where my oranges were packed since it’s the only one that says,

This awesome facility uses state-of-the-art brix sensors in order to provide the sweetest of fruit available.

The woman from the hospital called me this morning and I’ve paid my bill. I got the usual 10% discount for cash plus another 1% for paying with my Discover card. That’s only 45 cents but, hey! it adds up.

I’d noticed a discrepancy between what is on Humana’s website and what is printed on the statement from the hospital. The payment reported by the hospital is $2.34 less than what’s on the website. The contractual allowance (write-off) is $2.34 more. Now, if someone is skimming, that’s pretty slim pickins. The woman said she was going to request the remittance advice from the business office to compare with what I gave her. Something’s strange somewhere. I don’t know if she’ll get back in touch with me or not but if she does and their figures match, I’ll see what Humana has to say.

After my bath last night, I squirted my ‘pits with my new stink-away. The smell was overwhelming. I got into bed and tucked the covers in so no scent could escape since it made it hard to breathe. By this morning, it was very faint. I haven’t had my bath yet today and I still smell minty — uh, sage-y fresh. That stuff is powerful. I think I’m sold.

The storms ambled through off and on last night and now there’s a freeze watch out for this area until Sabbath morning. I hope the fruit trees don’t get bit.

A week from tonight is the last Democratic debate before the big New York primary. It will be on CNN and will start at 8 p.m. TT. I guess the GOP isn’t planning any more until after the nominee is picked. And it looks like he will be picked since it would take a miracle for any of the three to make it to the magic number of 1237. John Kasich has said all along he will be the nominee. If that happens, it may be all s/he wrote for the Democrats.