merm has been “Feeling the Bern” for months. She posts articles, videos and memes on her Timeline faithfully. If she missionaried, she couldn’t be any more evangelical.

Today, she posted a graph that shows “the media is lying” about Hillary being so far ahead delegate-wise, Bernie won’t be able to catch up. The numbers weren’t current so I went to https://www.meta-chart.com/pie and made this: 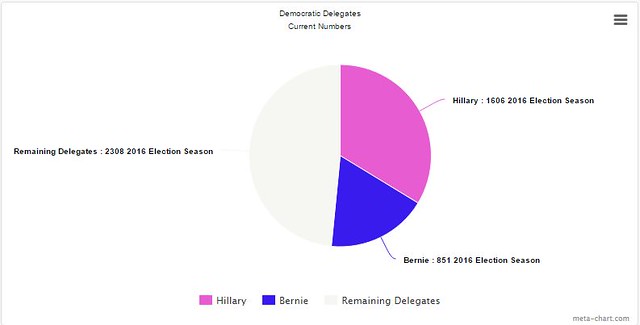 She came back and objected that this included superdelegates who can switch their allegiance whenever they want. Actually, pledged delegates aren’t immune but I went along with her. I said, “Okay, we’ll do it again.” So I did.

This one only includes pledged delegates and looks much like the one she’d posted to begin with (but she was nice enough not to say, “I told you so!”) 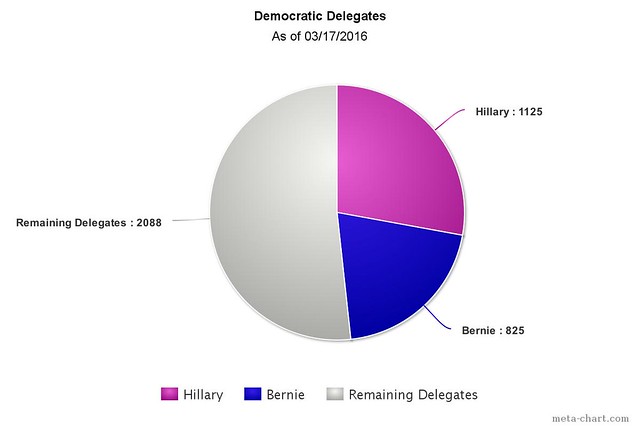 I hate to leave anyone out so I made a chart for the GOP. There aren’t very many superdelegates on that side of the aisle so this only shows pledged — I think. Either way, it’s pretty close to what the numbers were before noon TT. They all are. 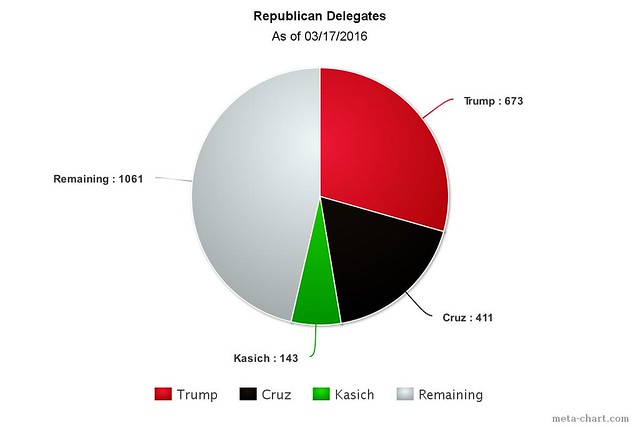 My sister sent a link to a rather light-hearted article about Trump. 14 Scary Things That Could Happen If Donald Trump Becomes President. I got this off merm’s dad’s Timeline and posted it on my sister’s.

Now, THAT’S scary! One of merm’s dad’s friends quoted part of Psalm 3:7, “Be not wise in thine own eyes…” The rest of the verse is, “…fear the LORD, and depart from evil.”

You know, I envy the Catz. They are blissfully unaware of what’s going on in the world outside the little piece of land here. They’re happy with food, catching the occasional mouse or bird and getting scratched, stroked and petted.

The weather has turned somewhat cooler. I cranked up the heater in the bathroom earlier this afternoon. It should be plenty warm by now.

The Day After Semi-Super Tuesday
Winding Down