It was supposed to be a debate with grownups. Instead, it was a knockdown, dragout fight that might take place in a schoolyard. Of a grammar school. If you didn’t see it and want to spend a couple of hours of your life watching it, it can be found right here:

To begin with, there was a moment of silence for Antonin Scalia. The first question concerned his death and the vacancy it’s left on the Supreme Court. The body wasn’t even cold yet but there were definite opinions. The Donald predicts Obama will try to appoint someone but he hopes “Mitch and the entire group” (sounds like a gang) will do something about it. For a wonder, Jeb said, “Of course, the president, by the way, has every right to nominate Supreme Court justices.”

As for the rest, most people on the stage were “liars” at one time or another. Trump accused Jeb of saying he’d threatened to drop his drawers and moon people (which was, somewhat if not completely, accurate). Jeb trotted out eminent domain again and Rubio accused Cruz of not being able to speak Spanish. Cruz retorted with a Spanish phrase. I had to look it up because I can only understand a few bad words and ask, “Where is the bathroom?” Roughly translated, he said, “Right now, say it in Spanish. If you want.”

Carson made his usual joke about not being called on much but when he was asked about bombing certain targets that might include civilians, he calmly said, “…obviously, you’re not going to accomplish all of your goals without some collateral damage.” He said it very quietly and deliberately and I got a flashback of Timothy McVeigh and the Oklahoma City bombing. It was a chilling moment.

Once again, Kasich was the Voice of Reason saying, “Look, the bottom line is the people of this — of this country and this state want to see everybody rise, and they want to see unity, and I don’t want to get into all this fighting tonight, because people are frankly sick of the negative campaigning.”

To wind it all up, Carson used his closing remarks to quote Stalin — a quote that can’t be found anywhere.

The GOP field is down to six. That’s about five too many, in my estimation. Some people I’ve talked to don’t like any of them. It’s sad that a political party can’t do better.

My sister emailed she’d watched but not until the “bitter end”. That describes it well. It was a bitter debate and one that will go down as contentious.

She also said my nephew is in the hospital so I gave him a quick call. He laughed and said he was admitted to the Mother Ship. Later, I was congratulating myself on not coughing while we talked but it was a bit soon. I started coughing and kept it up for far too long. My nose was running and when I couldn’t get to the tissue quickly enough, it was making little puddles on the floor. This will be my second night without Zantac. I hope I’ll live.

Genese is in the hospital, too. At first they thought she had a blood clot but that’s been ruled out. I haven’t heard the latest from Kimberly.

When I went out to feed the Catz this morning, here’s how they congregated: 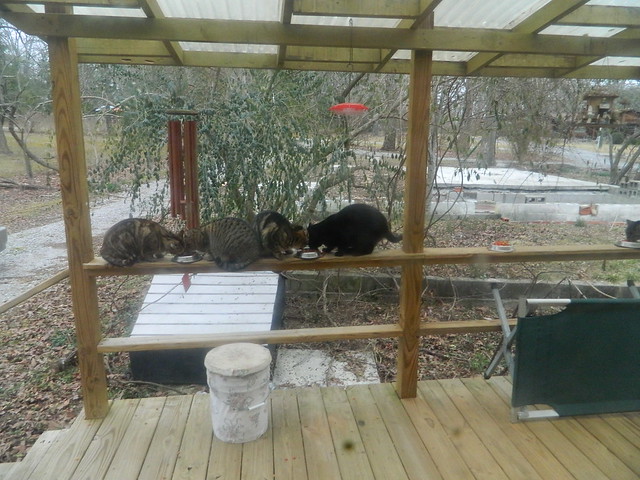 Finally, the only male in the bunch decided to move to one of the three remaining free bowls. 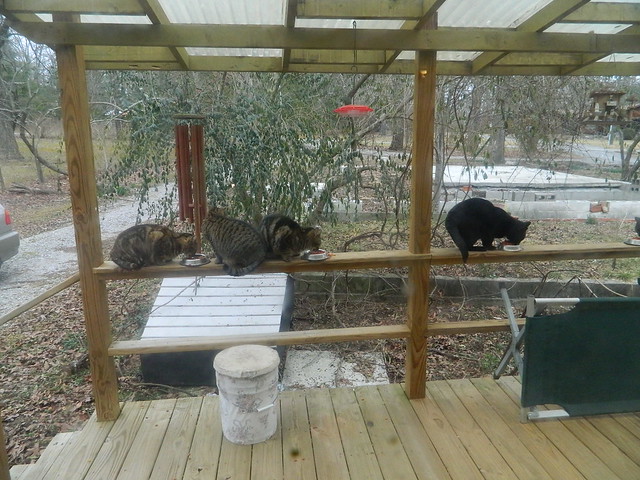 Just after I took that picture, the cat on the far left batted at her banquet companion. I don’t know what happened next. I came back in where it was warm.

DD has put our conversation off until tomorrow. She went to the “I Can Do It!” conference.

Cuz texted it was snowing where she is. It sleeted here. It isn’t doing anything now but the possum was back. It got another shower. I don’t know how long it will keep it at bay but it needs to go feed on whatever possums eat. In spite of my putting a gallon of RV antifreeze in the commode, it’s showing signs of the line freezing. Again. I need to warm the other bathroom up and take a bath but I think I’ll put that off until tomorrow. If I space ’em out enough, maybe I can make it ’til spring without too much trouble.

A Rarity? I Think Not.
Ice Storm!

2 Responses to A Barroom Brawl