Going back to yesterday…the drain in the master bath thawed so I was able to take a bath. I’d been tempted to not change the bed since I thought I wasn’t going to be able to cleanse my body but since that had changed…I didn’t want to put my clean body in a dirty bed or vice versa so I stripped it, washed the linens and put them back on again. While I was at it, I did a load of clothes, too. The only thing I didn’t do was run the dishwasher because it wasn’t quite full.

Last night, I was able to get definitive word that there would be no services today. Snow had started falling in the afternoon and roads were bound to be treacherous. No one with either email or Facebook should venture out. And then Cuz texted and wanted to know if I needed her to come get me and take me to church! Surely she was joking!

I was in bed earlier than usual and slept pretty well except for having to get up and go to the bathroom more times than normal. I heard the clock strike 6 and went back to sleep. I didn’t wake again until 10:45.

The phone rang and it was DS1. He was being thankful it was Sabbath and he didn’t have to go anywhere. I asked if their services were canceled and he said no but they weren’t going out. The hill they live on is very steep and a small amount of snow or ice can make it very slippery. I’d gone into the kitchen while we were talking and noticed the water in the pan on the stove was getting low. I turned on the faucet to fill the pitcher and…nothing.

Helpfully, DS1 said, “You should have left water running last night.” Well, I can’t back up and do it now. I guess it’s been cold enough long enough to finally get to it. I do have drinking water but I’ve been using wipes to “wash” my hands.

The Catz would be out looking for food so I pulled on my coat with the balky zipper and went out to feed them. This is the sight that met me. 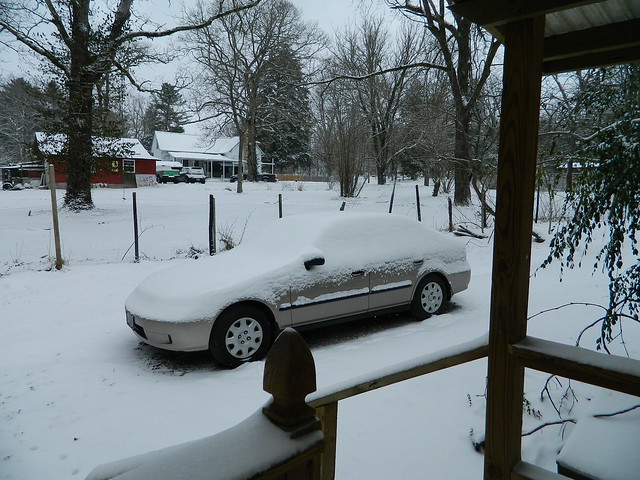 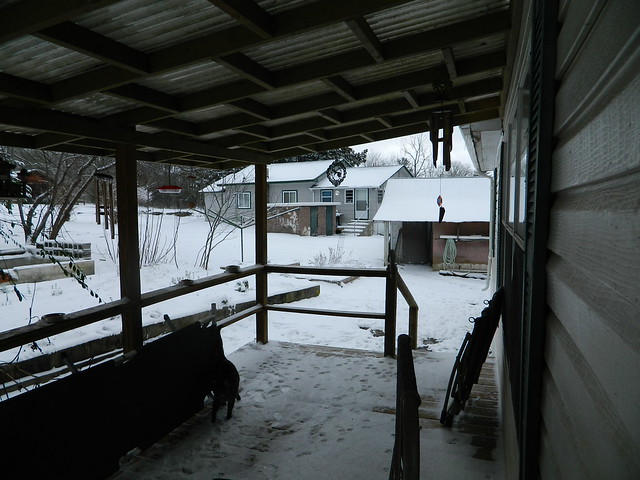 It’s hard to say how much snow we got. It’s dry and powdery and has blown around. The deepest spots appear to be maybe 2-3″. Not much but enough to make me thankful I have a warm place to be even with my other problems.

I’d posted links on Facebook for the church members. They were suggestions about how they could spend their Sabbath School and church time. I never got around to practicing what I preached. This afternoon, I did watch “The Best Christmas Pageant Ever”. I tried to watch it on the university web site but the audio person didn’t have all the sound switched on so I gave up and watched this one from 1983.

This is pretty good but the book is better.

I got an email from my sister. She was the recipient of a nice “pay it forward” lady at the grocery store. The lady had been eyeing the contents of her cart and the braces on her arms. When my sister checked out, she was told the lady had left $40 to help cover the cost of the purchases. My sister not only didn’t have to pay but got over $9 in change! Officially, her area got 14″ of snow.

Since I had to upload the snow pictures, I uploaded the pictures of my Christmas present from DD. Here it is: 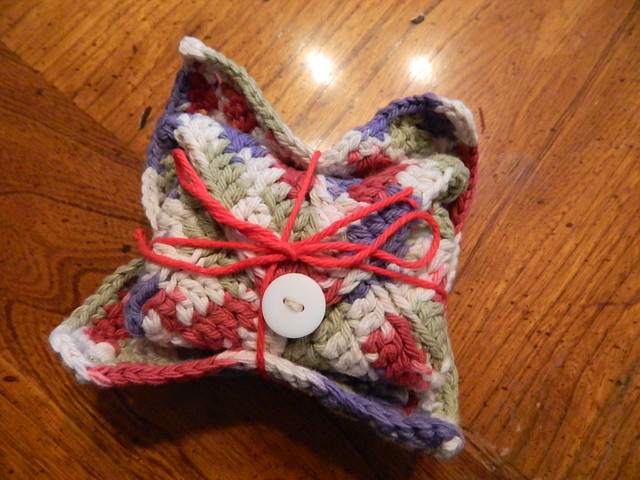 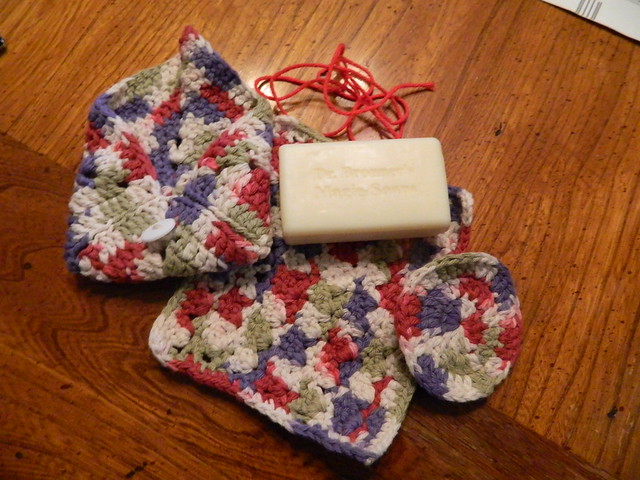 From left, a soap saver, a bar of Dr. Bronner’s Magic Soap, face scrubber, and on the bottom, a wash cloth. I’m pretty picky about my soap but the Dr. Bronner’s comes close. I appreciate the time and effort she put into everything.

The kitchen tends to be warmer than the living room so I put a small fan in there to circulate the air. It’s brought the temperature where I’m sitting from 63 to 67. I’ll turn it off before I go to bed and then it will get cool again. The forecast low for the valley is 16 so nothing will be thawing tonight. Tomorrow sounds better with 45.