My sister’s birthday or not, I had to go to town today. After partly cloudy yesterday, it had turned out to be severe clear with a high in the valley of 71.

When I took my bath, I lay back and admired the “azure blue sky” as my deceased sister would have called it. It’s nice to see something like that after all the rain we’ve had. I checked WeatherBug and the wet stuff is predicted to move back in on Thursday. We can hide and watch and see what happens. The Weather Guessers have been wrong before. DID YOU KNOW THAT??!

A side note here:
I’m blogging early because I plan to watch the last GOP debate of 2015. The “kid’s table” is underway right now but since I don’t think any of them are contenders, I’m not watching it.

I’d fooled around and gotten a later start than I’d planned. Roaming around Walmart, I got most of the things on my list. To get one item, I would have had to go to Christmas Land and I completely spaced it out. I’m sure I’ll be back before The Day.

Price matching involved oranges, Roma tomatoes, and avocados. I got one bag of the oranges. The produce guy had to go get another bin. The only bag left in the one that was there had an orange that was completely smashed. Another lady came up looking for oranges and I told her I was price matching mine at $4.99 for an eight lub bag. A couple was sorting through avocados and I told them I was price matching for 49 cents. The woman said she’d just come from that area and she wished she’d stopped. I never go by without stopping — or hardly ever.

There were things ‘way across the store I needed so I got some exercise. I found a checkout lane that wasn’t nearly as full as the others so I chose it and started unloading. The girl was new and not as fast as the others but that was okay. I had more time than money.

As usual, I put my bags on first, then regular items and price matching goods last. When she started scanning things, I told her I was price matching the oranges, avocados and tomatoes.

She did okay on the oranges and tomatoes but the PLU for the avocados wasn’t found. She finally got them to ring up. They had been posted at $1.18 but were in the computer at 88 cents. I told her they were 49. When she totaled everything, I looked down at the display and there were 49 avocados at 49 cents. Whoopsie! I pointed out the error. Since it was totaled out, she couldn’t fix it. A supervisor came over and tried numerous times to get ‘er done to no avail. She told the girl they’d have to cancel the transaction and ring up everything again. That meant going back through all the price matching, too.

People had come to that lane and given up and left. What I was thinking was, “This is more to tell on my blog.” When it was all done, again, I thanked the girl, smiled at her and was on my way.

The Catz were milling about when I got home. I’d bought another bowl to add to the five they’ve been eating out of for months. Now, the six that usually show up won’t have to barter. I’d left the door open after I fed them and when I passed by, I saw the extremely skittish one sitting on the compost bucket. For a wonder it stayed put while I went to get my camera. 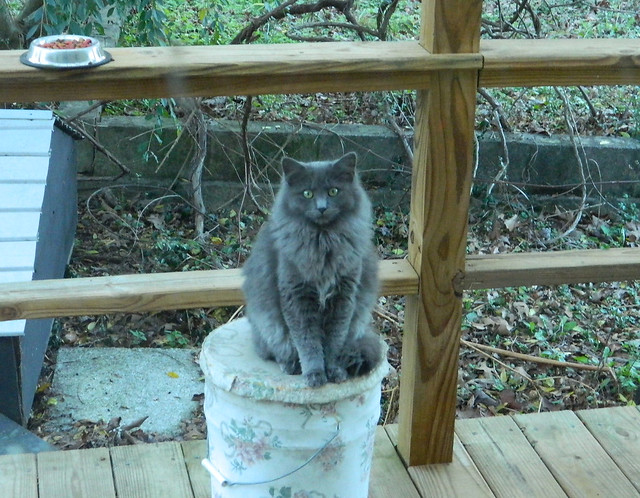 Whatever the gender, it’s a beauty. I’m glad it isn’t in my house. Think of what it would be like in shedding season.

I have another thing or two to do before I can settle down to watch the debate so here I go!