It’s fair to say that yesterday was fair all day long. Such a nice change from all the rain!

My Friday went as most Fridays do. It was bed-changing time so there was laundry and more laundry to do. The rest of it was routine stuff. AND I took a bath in my tub with the (now) non-leaking faucet.

After sundown, I was relaxing when the phone rang. It rang once but no one was there when I picked it up. The same thing happened again. After a minute or two, an email came through with the transcription of a voicemail. It was my sister asking me to pick up the phone if I could hear her. Of course, my voicemails come via email so I never hear the messages until after the fact. She said she would send me an email and I could call her if I had any questions.

The first thing I’d thought was that something had happened to our other sister. Then I saw a message pop up on Facebook. Between Facebook and email (if there’s a next time, I hope we pick one and stick to it) I learned that, in fact, our sister was the subject. She was going down the basement stairs, tripped and fell down the last four or five. She ended up with a broken right wrist, a sprained left wrist and multiple bumps and bruises. Until Monday, she has a bulky splint on her right wrist. I guess the left one has an Ace bandage but I’m just assuming.

So…I sent out a blast email to the church group asking for prayer for her plus I posted it on my Facebook church group. I’m sure she doesn’t feel too perky. My nephew told me she’s on pain medication. I haven’t called and I’m sure she isn’t up to emailing. I’ve asked for an update from my nephew since I’m sure they’ve communicated but he hasn’t answered yet.

It’s a miracle she didn’t do more damage. The basement floor is concrete and that’s very unforgiving. I’m thankful she didn’t hit her head on the way down.

I’ve made sure I slept warm after the disaster of the other night. It must’ve been a dream, though, that the timer beeped this morning. I got up and more than a half hour later, it beeped for sure. I could’ve snoozed that much longer.

A year ago today, I was greeted by Twinkle’s little deceased body lying in front of the fridge. May she rest in peace.

The audio guy was on the front porch of the church. Again. I told him someone needs to give him a key and he agreed. It was cold even though he was sitting in the sun. Unlocking the door, I flipped on lights as I went in.

The speaker for today had both the Sabbath School class time and the church service. It was on the Sanctuary. I didn’t go to the organ after SS until he’d finished. I played for a good five minutes but the songleader didn’t come up until at least twice that long. Maybe she didn’t notice the change in the bulletin. Whatever. I lived.

We’d had Christmas songs for the first song service but the second one were ones that were intended to tie in with the sermon. I was rather relieved that we weren’t doing all Christmas songs. I get rusty after not playing them for almost a year.

When I took my bathroom break, I spied my adopted sister. She was sitting with the Computer Owner. I hugged her from behind and went on to take care of my needs.

After church, the CO came up to the organ to talk. I asked where her feller was and she laughed. He’s in the hospital (the Mother Ship) with an ailment similar to what she had this past week. I asked if he will move up here after the wedding and she said yes. I’d thought she might move to where he currently lives but she said no, they’d decided on her place. We talked a bit longer, then I locked the organ and we went out. I stopped and talked to my sister for a few minutes and came on home.

There was a box big enough to bury a good-size man in on the deck. I knew I hadn’t ordered anything so I thought it might be an early Christmas present. There was a sticker on it that proclaimed, “HEAVY”, and it was. I propped the storm door open and pulled it into the house. Then I spent the next few minutes coughing.

One side of the top was loose so I looked in. It was subscription items I’d marked as SKIP this month. Oh, woe! I’d approved two items to be sent and they’d come earlier in the week. There are seven unwanted items in the box, according to the list on Amazon (I just looked) and two more scheduled to arrive next week. It wasn’t anything I was going to address on Sabbath so I pushed it out of the way of the front door and changed clothes.

I’d fed the Catz this morning but they were milling around and begging. Oh, well. They’d have to be fed again, anyway, so I went ahead and put food in their bowls. The black used-to-be kitten was eating out of a bowl just the other side of a post and had its rear where I could get a good look. It’s six times sure and seven times certain that it’s a male. A tom cat! He should be fixed for his own protection but he can’t get pregnant. That’s a relief! The gray cat has such long hair, I doubt there’s any way other than catching it to find out. It’s more skittish than the black one, too. 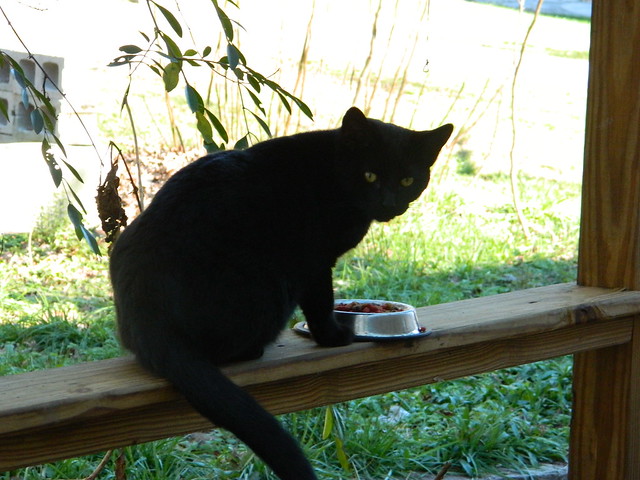 Several weeks ago, I was asked to review a book that’s the second part of a trilogy. It’s an allegory and I said I’d do it. It came today and it has 50 chapters. I’d planned to start it this afternoon but I never got a round tuit.

After sundown, I sent an email to Amazon about the unwanted shipments. It may take some time to hear back since I sent all of the order numbers (each item has its own number). I don’t need this expense right now, for sure.

The water bottle is filled and on my lap. When I go to bed, it will be at my feet. I don’t plan to turn the heat down a whole lot, either. The temperature outside is 35 degrees. Predicted low in the valley is 28.