It was too early to be up when I first woke this morning so I went back to bed. I really need to learn that my sleeping at that hour is going to take me past a reasonable getting-up time. It was much later than I care to admit.

I was going about my everyday business when it hit me that this was Monday—and it wasn’t far from being 10 a.m. That’s my standing B12 shot appointment with my nurse friend. I buzzed around and made the bed, slipped out of my ratty housecoat and into a house dress. A few minutes later and here she was.

It was my last single dose vial and she expertly drew up the liquid into the syringe. I barely felt the needle go into my arm and it was over. She told me about the kittens she has to give away but I can’t give her any help there. I might get shot with something other than B12 if I brought another cat onto the premises. We talked a little more and she left. I noticed her sweatshirt was on inside out. Maybe she’d been in a hurry, too, or maybe she wore it that way on purpose. I’ve been known to do that when the seams are itchy.

When I got on Facebook, I saw where several people had “liked” my stuffed pepper post and my roommate had commented on it. That reminded me I needed to take care of them since I was sure they were completely frozen. I got them out, put two peppers to a sandwich bag (except for one that only had one) put them all in a freezer bag and labeled it with the date. 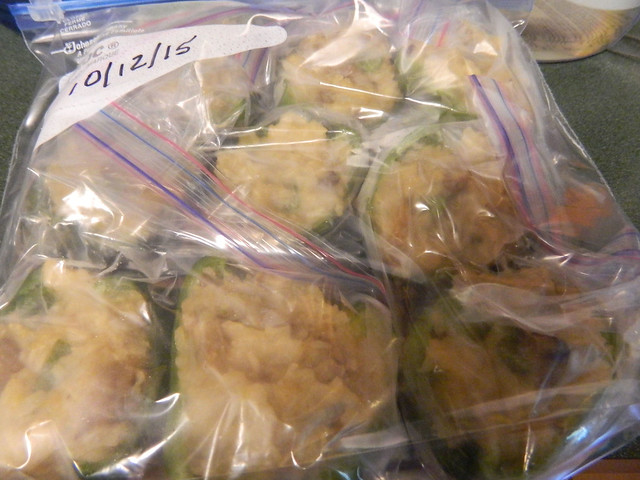 My sister emailed she’d dreamed her son had brought her a half dozen peppers and she didn’t know what to do with them. She later read my blog post and said she’d never thought about stuffing them before freezing them and it’s a good idea. Yes, it is, but I got it from Cuz. She stuffs hers with meat, though, so that’s where we differ. I must give credit where credit is due.

Which reminds me…I had told my nurse friend about Humana’s denial of my inpatient stay and that they’d sent me a form to fill out for an appeal. She was dumbfounded. She’d worked for years as case manager at the hospital and never expected a patient to appeal anything. She said it should be up to the hospital to do it and I agree. However, ever since the Mother Ship took over the little Critical Access Hospital, Patient Accounting has had problems billing claims correctly. Personally, I’d like to see it just wither away and die but I wouldn’t feel right about it if I didn’t pursue it.

Cuz came over just as I was finishing with my leftover rice mixture. I heated it in the oven and it dried it out again even though I had added water to it and it was covered. Next time, it will be the stove top. She didn’t stay long. From what she said, it had been a tiring day.

WELL!! I went on Humana’s site to get the text of my email since what I had put in my blog post didn’t have the approval numbers I needed. I saw a message I hadn’t opened yet. The notice it was there had come on Sabbath and I’d forgotten about it. I wasn’t planning to open it until after Sabbath was over. Here’s what the rep wrote me:

Thank you for your recent inquiry submitted through the Humana Message Center.

We are responding to the below email regarding your issue.

I apologize for the delay in responding to your inquiry. We have been experiencing very heavy e-mail volumes. Humana strives to answer all inquiries within two business days.

Upon review of the claims I have found out that the Hospital has not submitted a corrected claim for the Skilled Nursing I have tried calling them again and they were closed I would recommend having the provider contact Humana to see what they need since I have called them back on September 16, 2015 for a corrected claim.

Thank you for contacting Humana to receive guidance when you need it most.

So…I’ll call Patient Accounting again tomorrow. If they don’t do what they’re supposed to, to get the claims paid correctly, I can’t make them.