My last post was on Tuesday night. That was the 15th. Updates pop up on the bar at the top of my screen and when I went to the page for such, one was an upgrade for WordPress. The previous upgrade hadn’t gone well. It hung and merm got it taken care of in a couple of days. This time, it hung again and it’s taken five days to fix it. Hopefully, all is well but I’m going to be paranoid about WordPress upgrades after this. I don’t want to make it three times.

Wednesday was my appointment day with the gastroenterologist. When Cuz rang the doorbell, I was on the phone with a rep from Humana telling me the claims I had emailed them about would be fixed. Oh, joy. That means I’m that much closer to having to pay that whopping co-pay. Even with that, I’m still not quite halfway to what I’d have to pay for a supplement.

I don’t feel like the visit was terribly rewarding. Since I can’t take Dexilant, I’m to double my dose of Prilosec and take one before my second meal of the day and still take the Zantac at bedtime. When I mentioned Stretta therapy, he wasn’t too encouraging. He’s insisting on a second endoscopy to see if there are any remnants of the carcinoid left behind. He said he could introduce a probe and test the pH of my esophagus. What that will accomplish, I don’t know. I take PPIs so there shouldn’t be much, if any, acid present. I would like to be able to get off my medications that leach calcium from my bones.

Our meal stop was at Taco Bell. Seems that’s one place I can be assured of getting a bean burrito. I tried to do that at the local Mexican restaurant but the waitress didn’t know how to manage anything that wasn’t on the menu with a number beside it.

ALDI and Walmart were our next stops and when we got home and unloaded, Cuz jumped on the lawn mower and mowed. She was pretty tired when she got through.

There was a voice mail from Matrix. The nurse who was planning to be here the next day had to cancel. I called and rescheduled for next month.

Not a lot happened on Thursday or Friday that was out of the ordinary. Actually, I can’t think of anything that was anything but the norm.

I’ve taken some Catz and Kittenz pictures. There’s one of the Neighbor Cat, too. It’s pretty but still unwelcome.

This was taken through the storm door. If I opened the door, the Kittenz would scatter. 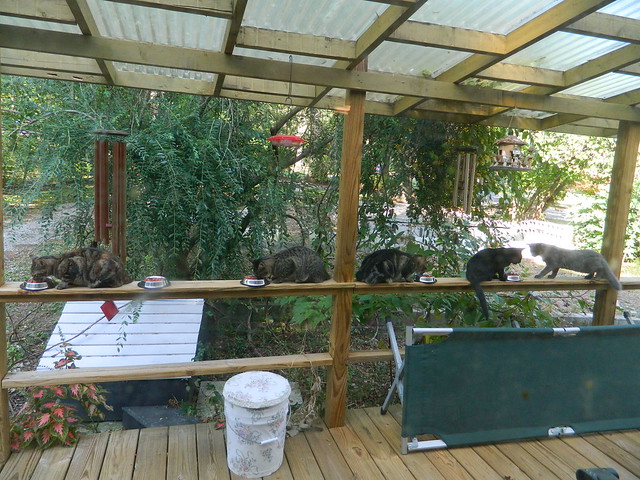 The same is true of the Neighbor Cat. S/he is very skittish. 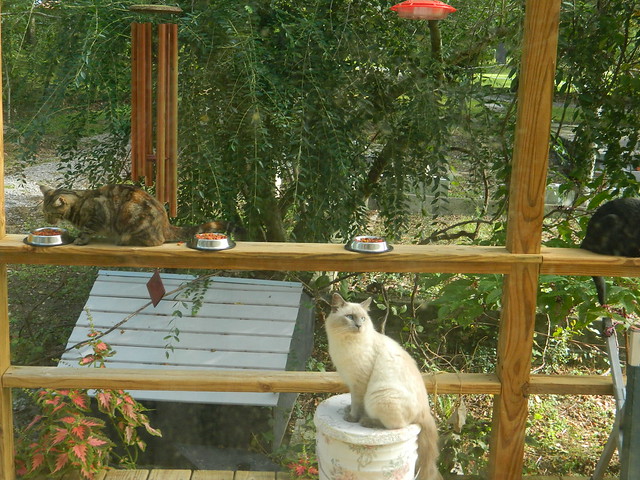 I think I took this one earlier than the other two but it doesn’t matter. 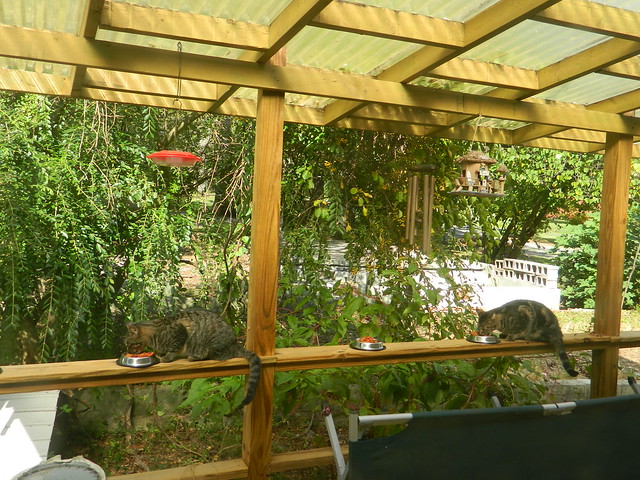 Yesterday was when the ladies conducted the services. The men were all gone on retreat. I think the request for me to play the accompaniment for special music took the cake for being spur of the moment. I was asked when the sermon had started. It was to be for the closing song so I did have a little while to look it over. It was a familiar song so it went okay.

A very hard of hearing man was visiting. After church was over, he told me he wished he could play the organ like I do and then laughed and said he doesn’t play at all. I told him he needed hearing aids like mine. He showed me he has them. When his wife spied my Tek, she wanted to know where I got it. I started to tell her when he interrupted. “I have one. It’s at home on the dresser.” Well, there you go. No wonder he can’t hear with his aids. They’re probably set on one thing and he leaves them there. He told me he could hear me just fine—that I was speaking clearly. I told HIM we were face to face and one on one. That can make a big difference. When he said he doesn’t lip read, I told him my audiologist would disagree with that. Almost all hearing impaired individuals lip read whether a little or a lot.

There was a picture on merm’s Timeline of DD and her SO at the birthday celebration for merm’s sister. They were having hot dogs cooked over the fire pit. I commented and asked if DD’s was a Big Frank. merm said it was a kosher beef frank. I replied, “Yeah, right.” It would be as likely for her to eat part of a dead cow as it would be for me to. When I kidded her about it today, she said it was a Big Frank.

She was continuing to pack and they’ve already taken several loads over to the house. They’re hiring movers for the bigger items and most of the boxes. I’m glad it’s them and not me.

Well, merm has come through again. Seems the old blog is back to normal. There’s lots I haven’t written about but it isn’t anything you need for survival so be thankful this is a relatively short post.

10 Responses to And We’re Back!