I have a sixth sense when it comes to doing the body test with the Wii. For some reason, I can almost always tell when the “continued” part starts with the single-leg test. To do that, I have to move one of the dining chairs into the living room and boy! is it heavy! I don’t know why Mother chose such beefy ones. At any rate, I tested at 20 Wii Fit Years for the eighth time this month. After that, I had to muscle the chair back to its place.

When I went to the bathroom and flipped on the light, there was a pop and darkness. I turned on the hall light which made it seem less like being in a dungeon. Later on, I got the step stool and changed the bulb. Cuz would have been upset if she’d seen me climbing around like that but I can change a light bulb.

My sister suggested that I “stoop” instead of bend to put the Catz’ food in their bowls. This is how it looked to begin with: 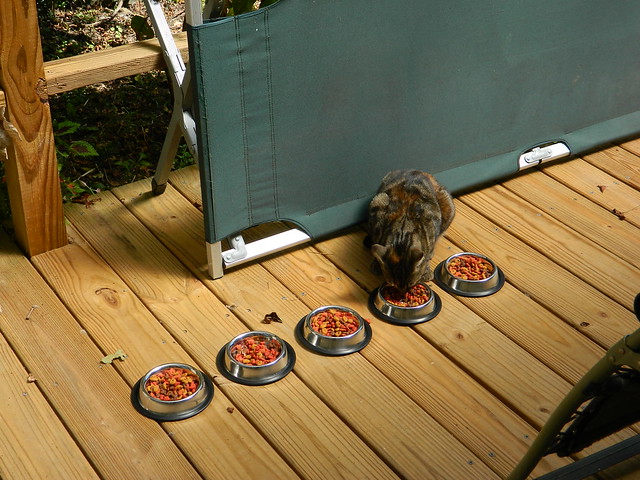 I did her one better and did this: 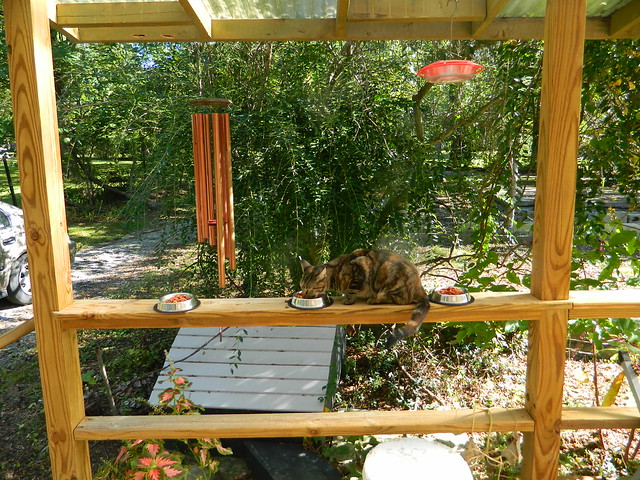 More than just the one member of the Catz clowder came to eat. Once, two of them were at the one far left bowl eating. There was food in two other bowls but they both wanted that one. When I got my camera to take a picture, of course one jumped down.

I did some doctoring of the broth and rehydrated some more of the veggie cutlets. Then I breaded them with Cedar Lake Breading Meal (which made them no longer gluten free) and fried them. They were much better. I fixed the rest of the okra that Cuz had given me the last time and fried it, too. So, I had two fried dishes at one meal. That hardly ever happens.

Cuz seems to be feeling better. We’ve texted several times today. I’ve been messaging with my roommate, too. We tend to like the same videos. Of course, we did live together for one full school year and half of another. That had to have an effect on one or the other or both.

WordPress is telling me to update. I won’t do it until after this is published so if it hangs up like it did last time, at least I will have that done.

The hour isn’t terribly late but I need to get to bed soon, anyway, said she as she yawned mightily. Cheerio and ta-ta!

The Waiting Game
And We’re Back!

Leave a Reply to Susan Click here to cancel reply.