After my activities of yesterday, I couldn’t sleep. I got up and fooled around on the computer for a while and went back to bed when it was past 2:30. The clock struck 3 and I dozed off. It was in and out of sleep until I heard the clock strike 4. By that time, I was really out of it and conked out.

I was sleeping soundly when the phone rang. The voice on the other end of the line was unfamiliar. I looked at the clock. My sleep hadn’t even totalled three hours. The man explained that he had called all of the names listed on the back of the bulletin but no one had answered until he called me. Well, bless their hearts. He wanted to know if there would be prayer meeting tonight since the pastor was leaving. I assured him that it would go on as planned.

After we hung up, I tried to go back to sleep. Eventually, I was able to but it was so late by that time, I had to get up and take my morning meds. Contemplating whether or not to crawl back in, I decided to stay up.

Today has been enveloped in kind of a haze. I don’t do well with not enough sleep.

When I’d come home without a haircut yesterday, I told Cuz I thought I’d trim my bangs and sideburns, myself. That’s exactly what I did. After my shower, I grabbed my scissors and went to work. My sideburns are over an inch shorter but my bangs had already experienced the whacking of my impatience and they were down by maybe a half inch. Now, if I could cut the sides and back, I’d be in business. That’s why I have to get it cut by someone else occasionally.

After I got dressed (aren’t you glad?) I went outside. Cuz had been busy cleaning out the raised beds. There was one lone tomato hanging on an naked vine so I picked it. When I turned it around, here’s what I saw: 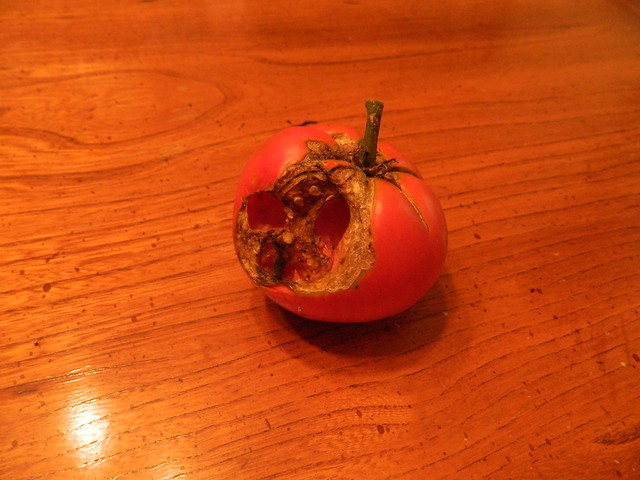 I figured I could trim it up and have it with the last meal of the day.

Cuz came over and brought me these: 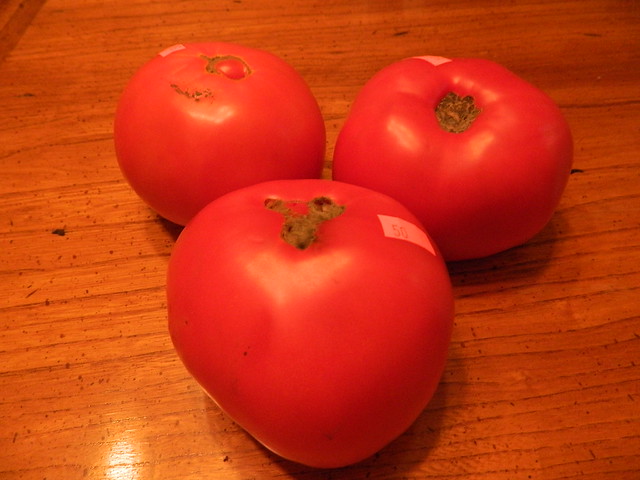 She refused to let me pay her for them or the three bags of Boca Spicy Chik’n Sliders she’d picked up at what Mother would have called the Used Food Store. I should let her do my grocery shopping. She was semi-horrified that I was going to eat THAT tomato.

The tomato wasn’t bad. Not the best I’ve had this summer but not bad. I also had a Super Duper Gut Bomb patty, some leftover squash with onion and a twice-baked potato. Oh, and some peas. I don’t think I’ll get hungry before morning.

There’s been some back and forth with the editor and the fellow in South Africa who assembles the Helps. I’ve let it be known what I’ll do and how I’ll do it so now I play the waiting game.

It’s not surprising that I’m sleepy. I guess I should think about going to bed.

4 Responses to What a Day!