This morning, I walked into the kitchen and saw something crawling on the floor. It was a wasp. I couldn’t be sure but it was probably the one that stung me. Three times. I was the master of its fate. I chose to take the high road, captured it and put it outside. It flew away, not knowing how close it could have come to death. Justice? Maybe not. Mercy? Undoubtedly.

The air conditioner has started making a funny noise and isn’t cooling like it was. I have to get right up next to it to feel the cool air. I took the filter out and cleaned it but it didn’t do any good. It’s been working hard the whole time it’s been in this house so maybe I shouldn’t be surprised it’s decided to conk out.

This afternoon, there was a knock at the door. It was my CIL with a bag of okra Cuz had sent by him. This picture doesn’t show it in its best light. 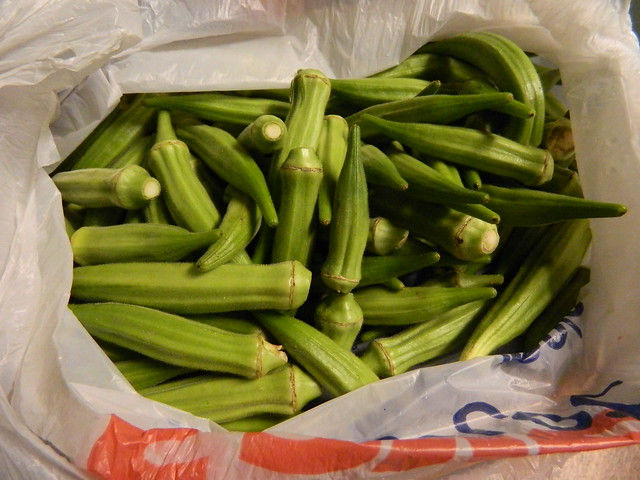 I fixed some for supper and thought I’d done just enough for a meal but had half of it left over for tomorrow. I’m going to try freezing it the way Cuz does. She washes it, pats it dry and puts it whole into bags. When she gets it out to use, she cuts it up while it’s still frozen, dusts it with corn meal and fries it. It should be good for gumbo that way, too.

Cuz mowed the lawn this afternoon and all had been quiet for so long, I wondered if everyone had left. I opened the door and was surprised to see Cuz standing there. She was just as surprised to see me! She came in and we had a good visit. She’s going to mention the a/c problem to the construction partner. I have a feeling there may be a new a/c in my future.

Walmart is making me richer all the time. My total with Savings Catcher had been stuck at $4.23 for months. The last time I went shopping, I bought some hair spray that was less at K-Mart. My current total is $4.38!

I just scheduled my car insurance payment. It’s due by midnight day after tomorrow but it’s scheduled for tomorrow. I surely don’t want a lapse in coverage. It’s $14 less this time than last and will do me until mid-January.

It’s slowly cooling off in here. The temperature outside has been cooler than in the house all day today. Outside shows up as 69 degrees. Inside is 82.

Bedtime is upon me so I must wind this up and call it a day.