These hot days are frustrating. I’m beginning to feel like I could be doing something but very much stirring around brings on the heat. I’m out of salad stuff so my lunch was soup and toast, neither of which took too much effort or energy. Cooking is pretty much out of the question (it would heat up the house even more). It surely would be nice to be able to use the a/c.

I’ve thought about eating more salads and smoothies but I don’t get to town often enough to have a good supply. It would be very tricky to eat raw these days.

On to a different subject…I order Prilosec online for less than the generic over-the-counter costs. I’d put in an order the other day and it was to get here yesterday. It didn’t. I pulled up tracking and it was in Atlanta. Okay. That was reasonable. This morning, I went to the mailbox and nothing was there but the Shopper. I looked at tracking again and this time it had made its way farther north and was out for delivery—57 miles away!

I emailed the vendor and got a reply that it had been sent to the right address so it was USPS that was at fault. I checked again and it was back at the 57 mile away post office. Now it’s in Chattanooga so I guess the error had been caught and it should be here one of these days soon. I’m glad I have enough to do me until it arrives.

The container garden hasn’t only been taken over by the Catz, it’s also the domain of Kittenz now. I looked out today and one of the Kittenz was making itself comfortable in the box that has the basil in it. It’s almost impossible to keep it watered, anyway. I can’t turn on the outside faucet and carrying water from indoors necessitates using a small water bottle so I don’t slop it everywhere because of my tremor. I guess I’d get my walking in but my level of enthusiasm is ‘way down.

The Kittenz are getting bolder. The black one joined the gray striped one at the food container today. 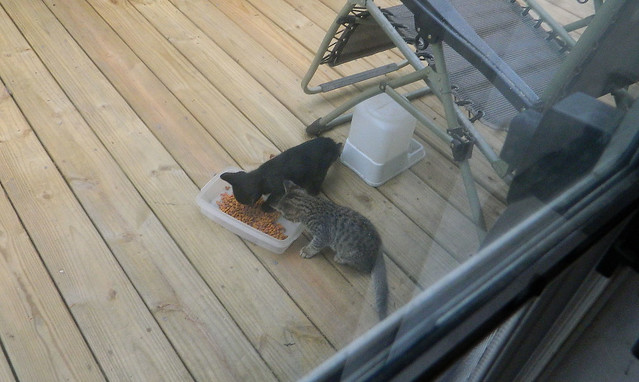 Earlier, Six had been eating and the Kittenz took the opportunity to nurse. 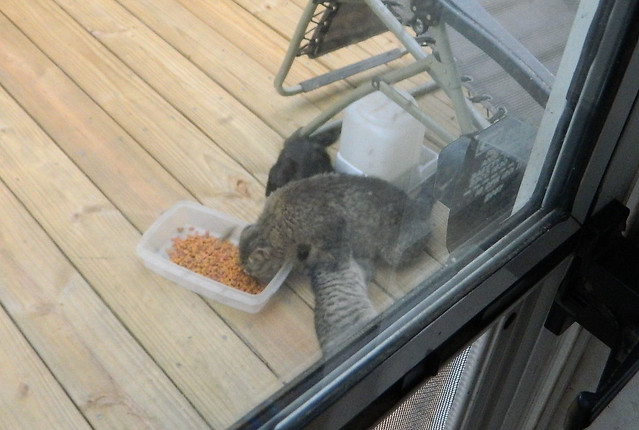 It was after this that the black one tried to nose in again and Six hissed and pushed it away. They are certainly big enough to be weaned, I’d say.

Tomorrow is another day. I’ve printed off some ads and cut the Save A Lot one out of the Shopper. I should look for coupons, too. Every little bit helps. I guess.

2 Responses to I Give Up!