Talk about hot! It’s been hot both inside and out today. The valley got up to 97 but it was “only” 90.5 here. In the house, it was 82 in the kitchen for a lot of the day. I don’t think it got over 80 in the corner where I hide out in the dark. As hot as it got, I’d hate to think what it would be without that little window a/c struggling along.

In spite of the heat, I slept well last night. Along with the doxepin, I took just a smidgen of melatonin. It was enough to ensure that I could get back to sleep whenever I’d have to go on a bathroom run but not enough to zonk me completely for half of today.

I’d looked out several times and even went to the mailbox and back without seeing any Catz. I don’t know if someone had come by and fed them or not but they were nowhere to be seen. Later, I opened the door and the most vocal of them was out there, meowing loudly and demanding to be fed. I put some food out, then noticed a little gray striped kitten on the steps at the other end of the deck. It came to eat but Loudmouth hissed at it. Rather than run away, it lay down and waited patiently while LM ate.

Eventually Loudmouth got through and the kitten took its turn at the pan. Then here came the big white neighbor cat that I am loath to feed. I stood at the door for a long time until the kitten had eaten its fill and it seemed it had a bottomless stomach.

I closed the door again (mostly to keep the less hot air inside) and the next time I looked, here’s what I saw: 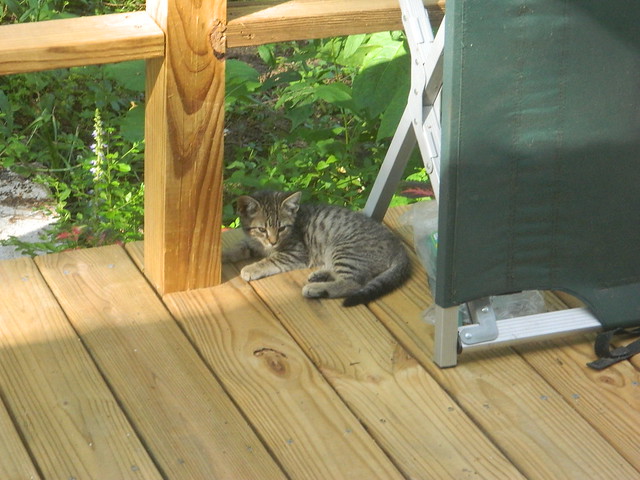 And, skulking around under the chair, this one: 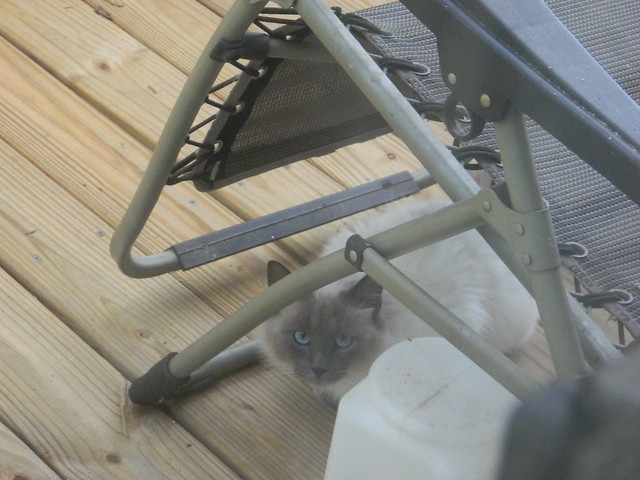 It’s really bold and it’s a beautiful cat but it has a home. The kitten didn’t back down from it, at least.

Later, when I looked out, the kitten was still on the deck. One of the Catz came along and wanted to get to the food but the kitten had it buffaloed and she wouldn’t try to challenge it. I would have loved a picture of the standoff but it was over too quickly and the Cat gave up.

DD posted some sad news on Facebook. The nice vegan restaurant, Sutra, she and Madelyn took me to, is closing in the fall. I’m sure DD will make it a point to go another time or two before then and I hope she takes a bite or two for me.

I’m feeling better, little by little. It will be interesting to see what the church service is supposed to be this week. I’ll probably get the bulletin file tomorrow and then I’ll know whether I feel I can sit through a sermon or not. There are some who are prone to go on longer than my body can take. One of my readers emailed me something that has stuck with me. It goes something like this,”Wonder when people will learn that a short meaty sermon well delivered is much more appreciated than one that has the congregation wondering when and if it will end.”

The dishwasher is running, my body is clean and it’s time to take my nighttime meds and go to bed. Good night, sleep tight and dream interesting dreams.

A Hot One
The Cool Room

2 Responses to And Then There Was Another One