I barked my way through Friday. My chest is locked up like Fort Knox. Once every now and then, it will loosen and I think, “Oh, good!” and then there it goes again.

I had to suit up and go to the mailbox. I’d been out of one of my supplements for a couple of days and I didn’t want to go any longer. When I picked up Mother’s scarf to wrap around my nose and mouth, I found my gloves underneath. The Catz were busy eating their food so I was able to get there and back without dodging.

Nothing was done that meant anything. I didn’t feel up to doing laundry, changing the bed, loading the dishwasher, nothing.

The Cavalry called in the late afternoon and asked me to send out word that church services were being canceled. The speaker would have had to cross the mountain and most of the members live off secondary roads that never get cleared. He asked how my water was doing. I told him fine but that the septic tank line was frozen. He indicated that he’ll see what he can do to prevent that in the future when the weather moderates.

Later, the phone rang again. That time it was my academy roommate. She wanted to know if I’d been on Facebook. Well, off and on. “Isn’t it terrible?!” I had no idea what she was talking about. Finally, she clued me in. One of our classmates had died and her son had posted a notice on her Timeline. Facebook had done one of its random deletions and wiped out our friendship so I hadn’t seen it.

The classmate had retired November 17, 2013. (At least Facebook hadn’t swiped our private messages.) She was only 69. My roommate told me she’d gone back to work part time because she missed it so. I’d not known that because we’d been unfriended. One of her sons had seen her earlier in the day and she was okay and then the other found her unresponsive.

Then my caller told me she’d been contacted by the “IRS” for tax evasion. She was to take her cell phone and go to one of the grocery stores where she would buy a money order for $5,850. She and the “IRS” would be in touch by phone the whole time. If she didn’t comply, she would be arrested immediately. Of course, she didn’t comply and she’s still free but I’d get an unlisted number if I was planning to keep my landline. I just googled her and there she was with her phone number for all to see. An unlisted number wouldn’t make it impossible but it would make it harder to find her. “I’m in the book” isn’t such a good idea any more.

We didn’t talk long because I was barking up a storm.

Once I got to bed, I slept pretty well until about 2 a.m. My coughing resumed so I got up, cranked up the diffuser and sat down to breathe in what would, hopefully, shake it loose. It didn’t but I did feel better so I went back to bed.

This morning, my cough sounded more like a goose honking than a dog barking and my chest is still tight.

My sister called but I coughed so much we didn’t talk long. When she goes home is still up in the air. I think a lot of travelers are in the same boat.

I spent church time watching “The Cross and the Switchblade” on iTBN. I missed a lot of what was going on because the volume was too low.

I took a couple of pictures to show the latest. It’s been raining most of the day. 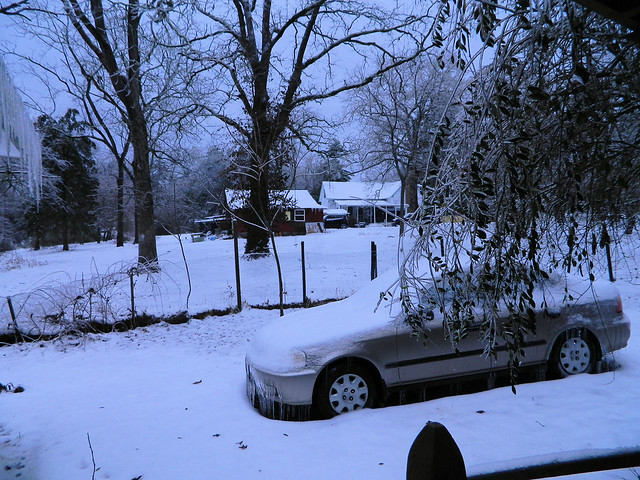 My intake has been 80 ozzies (so far) very warm water, a cup of blueberry coconut yogurt and two large onions, sauteed. The onions and water are supposed to break up congestion. They haven’t yet. To cap the stack, I didn’t even enjoy the onions.

Coughing sometimes causes unintentional problems with the bowel. I had to change twice today so doing a load of laundry was necessary even though I still didn’t feel like it. TMI? Probably so but I wouldn’t be washing clothes, otherwise.

Cuz texted me last night and wanted to know if I’m okay. Well, I’m not but I don’t know what can be done about it. I’ve looked up what I can find about my condition and it seems it just has to run its course. Last Sabbath, I said I wish I had a cold because I could get over that. Well, maybe I will and maybe I won’t. Either way, I’m right next door to Miserable.

In the Deep Freeze
Taking a Break

2 Responses to Improve My Mood