Let’s see. Where was I? Oh, yes! Right here in this chair. I’d lost my hot water bottle and found it in the dishwasher. When I talked to DS1, he told me he was glad it was back where it belonged.

I’d gotten the next bar of chocolate out. It has eight squares so it takes me a week and a day to finish it. This is the configuration now. 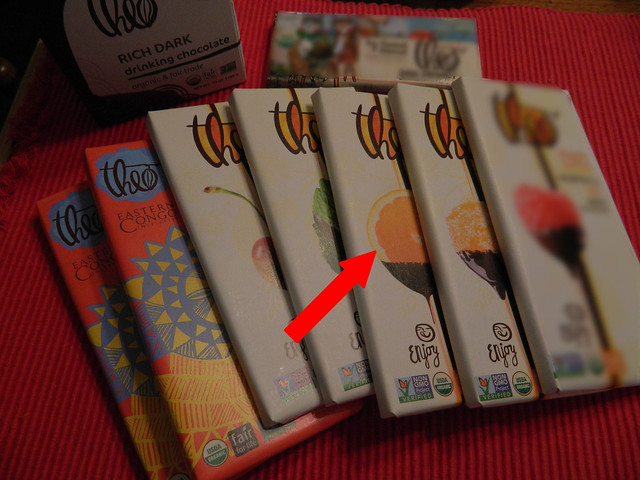 If my calculations are correct, it will be four weeks and two days until I get to my favorite chocolate. It would be simpler to say a month, I guess. The orange is good. When I first bite into it, orange isn’t that evident but it kind of creeps up and is stronger at the end.

Yesterday was pretty much routine. I fed the Livestock, stripped my bed (well, at least the Earthing Bag) and made ready to launder it. I’d gotten the bright idea of using the fitted sheet that goes on DD’s bed (the only fitted sheet I own) to try to stop the wedges from migrating.

I put everything in the washer together. Earthing Bag, fitted sheet, top sheet and pillowcase. I had to wash them on delicate for the Bag and dry them the same way. I’ve wondered if the Earthing Bag still is effective. When I got it out of the dryer, it shocked me so I guess so.

Putting the fitted sheet on the wedges was a little more challenging than I had figured it would be. I’d forgotten that the elasticized part is on the sides rather than the ends. I managed it, though, and finished making up the bed.

My sister called, concerned she was being told by something on the notebook that she didn’t have a proxy. I walked her through the steps to get to her Internet options and fix it. She started downloading Chrome and, later, emailed that it had worked. She’d told me she wouldn’t bother me further so I could get ready for Sabbath. I told her I’m never ready for Sabbath. To me, being ready is having the house up to passing the White Glove Test. Mine wouldn’t even pass the Black. Also, baths are supposed to be taken, all food prepared and the boots blacked (I don’t have boots). I’ll just have to make do with my attitude of thankfulness that Sabbath exists.

Before I went to bed, I took a bath to help me relax and used a drop of lavender to rub on my hands and neck pillow. I went right off to sleep but woke in the night with cold feet—again. The wedge doesn’t allow me to have the cover both above and below my feet so they’re just sort of open to the elements. It’s kind of like they’re sleeping naked in a tent. I managed to get them warmed up and I went back to sleep until the timer went off. It would be nice to say I got up right then but I didn’t. I stayed in bed until the sun started coming up.

The result of my experiment is that it was successful. Neither wedge had moved. The Earthing Bag hadn’t stayed put but it never does. I need to scoot the lower wedge down just an inch or two so my feet won’t hang off the edge. That might make them stay warmer, too.

DIL2 posted on Facebook that my granddaughter (the younger one) was having pain akin to that of appendicitis and she wondered if she should take her in. I automatically thought the ER but she meant the doctor’s office. After several posts, she decided it would be the better part of wisdom to get help. I put the word out for prayer.

I got to church just as the pianist had started playing the meditation music (my fingers automatically want to type “medication”). She finished the allotted 10 minutes and started looking around for the song leader. No one was in sight. She went on playing for another 10 minutes and I felt so sorry for her. I know how that is. I’ve been there, done that and it’s disconcerting. The first 10 minutes is hard enough but to have it stretch for 20 can be brutal. It isn’t supposed to be a concert.

My hearing aids were in my purse so I got them out and put them on/in. When we were singing the opening song for church, the right one gave its “Doodle de do!” I waited until a bit later before I went to the bathroom and changed both the batteries.

At one point, I started coughing so much, I had to go out so it wouldn’t disturb people. I saw the pianist and sympathized with her.

The speaker was half of the Road Trip team. His wife had a part in a program at another church. His message was very good. It was “Christ in All of Scripture”. He pointed out texts in the Old Testament that have to do with Jesus and showed how even the “begats” can tell of Him.

I’ll have to be the first to admit that I usually skip over the begats. However, since I’ve been taking my time reading the Bible through, I have noted that puberty must’ve come much later in life for the males in Genesis 5. Then, it’s interesting to note how the life spans shortened after the Flood when people were allowed to eat flesh food (Genesis 11 with Noah’s son Shem’s descendants and onward).

After church, I made a beeline for the car and stopped at Cuz’ house to feed the Livestock. On the way, I thought I was going to have to stop and get out to cough. I’d wished I didn’t have my coat on because I was too warm but I was glad for it when the cold mountain air hit me.

The chores done, I came on home, changed clothes and relaxed. I got the update from my DIL that my granddaughter was feeling better so I sent out word. I’ve dozed in my chair part of the afternoon and I hope that, coupled with the chocolate coconut ice cream I ate won’t keep me awake.

On the way to church, I wasn’t surprised to see the bit of snow still on the north side of the mountain but I was when it was still there after noon. Maybe it’s waiting for more. Who knows? We still have almost half of January, all of February and March to go through. Hey! Snow in April is possible.

Lost and Found
In ALL Things, Give Thanks

2 Responses to An Experiment