Last night, I went to the bedroom to get the hot water bottle to fill. I had the pan of water on the stove and I didn’t want it to get too hot so I was hurrying. No bottle was found. I remembered I’d taken it out of the bedroom but I couldn’t, for the life of me, remember where I put it. I looked high and low and even went back and searched the bed more than once. I’d turned the water off by that time and I started praying. It couldn’t have sprouted legs and walked off. That’s when something told me to look in the dishwasher and there it was. I’d laid it on top of the rack when it was open and closed it (with the bottle still inside) when I wanted the door out of the way. I thanked the Lord, proceeded with the filling and went to bed.

I wish I could report that I’d had a good night’s sleep. It took forever to nod off and when I did, I woke up what seemed like every few minutes. When I got to the REM stage hours (exaggeration) later, I was back in school and late for class. I had a boyfriend—a really cute guy with a strange haircut. Getting ready to go was taking a long time. I was going through my clothes and found one pair of pants with W I D E flared legs and they were maroon. My teacher was chiding me for not applying myself. It was just like the old days.

In spite of my restless night, I woke earlier than I have been. It was 47 in my bedroom so the bed felt much better than getting up. I lay there for a few minutes and made myself throw back the cover. It took some doing to make the bed, the mess it was in. I tucked the Earthing Bag under the lower wedge and hope that will discourage its moving.

I’d texted Cuz to see if she had an empty detergent bottle or a half gallon plastic jug of some kind that I could use for a sharps container. She texted back that she did and she’d bring it over when she got here. The doorbell rang. She handed me the bottle. I handed her the robe with instructions to give it to someone skinnier than she is.

A bit later, she called me. She’d been to the dentist I’d recommended and he’s advised some extensive work. The other dentist she’d gone to on the other side of the mountain had advised the same thing but at more than twice the price. She was well impressed, not only with his being more reasonable but she said he seemed to know what he was doing in spite of appearing to be so young.

One of my Facebook friends posted this skit from the Carol Burnett Show. It’s my very favorite and it fits right in with the subject:

The morning progressed as most mornings do. I had looked out and thought it looked like it could snow. A little later, I was surprised to see this: 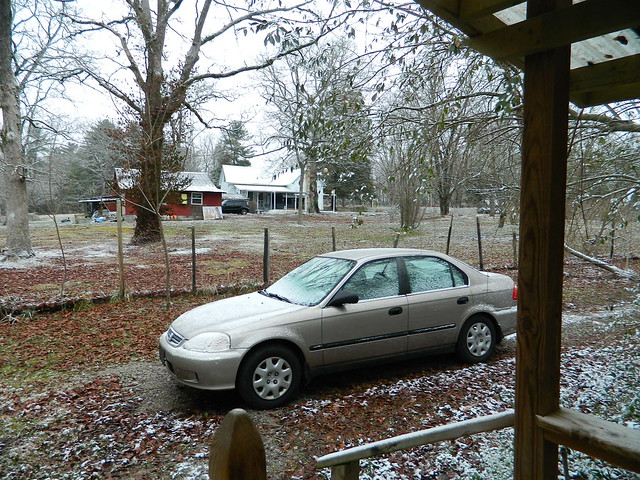 That’s about all it amounted to. My neighbor across the street works some miles away in the valley. She posted a request on my Facebook Timeline for an update on the weather. I posted, “Weatherbird here: Snowing little fine flakes. It’s laying on the grass but not on the bare ground.” Later, I said, “Looks like it’s stopped for now. The temp is 32. Still heavy cloud cover. This message is brought to you by ME.” I never saw sun today.

A little after noon, there was a knock on the door. My kit from dōTERRA had come. It was just shipped yesterday. That’s pretty good. The original arrival date was tomorrow. I opened it but I waited until I’d gotten some things accomplished before I went through it. I printed off the list and checked the items off one by one. There are 31. I put stickers on top of all the oils bottles and that took a bit longer. I’d put the oils in the box but I took them out and alphabetized them. I’ve kept the ones I’m using on the table where I fill the diffuser.

An email came from my sister. The owner of the notebook was still having problems and couldn’t get on her email. She thinks her old computer has breathed its last and that’s what she was using to communicate while the other one is still underway as far as updating is concerned. I called her tonight and she said there’s something about a driver that should be updated. I had her check and she’s still on Service Pack 1. There was one important update available and I’m guessing that’s what it is. When we hung up, it was doing its thing.

A little while ago, I checked Weatherbug and was startled to see today’s high. The actual high for the valley was 34 but somebody messed up. I did a screenshot for documentation more than anything. I think it’s pretty funny. I just looked again and it still hasn’t been caught. It doesn’t take much to entertain me.

Here’s hoping my sister gets everything on the computer shipshape. She’s talking about bringing it over for me to work on it. I hope she realizes it will take almost as long to install Windows 7 as it’s taking to install Vista. When I redo mine (which I rarely do—I try to keep it running its best) I have a list of things to download and add. It’s never complete. For days (possibly weeks) after, I think, “Oh, yes! I need such-and-such and I don’t have it!”

The night wears on. I left the hot water bottle in my bed on purpose. I don’t want to get anywhere near repeating last night’s experience.