It won’t go away. It rained yesterday. It’s rained today. I’m beginning to think this will be on record as the gloomiest winter ever.

The critters must be being fed. I haven’t been asked to do it so I’ve done what I’ve been told to do and not worried about it. When I took the remaining bread out to the freezer, though, and a couple of the Catz tried to jump in after it, I decided I’d do something about it.

When I got back to the house, I opened four cans of Twinkle’s Fancy Feast, put them in the container I’d given them for water, and set it out for the four that showed up. I haven’t seen five for a long time. They went to work and pretty much inhaled the food. It was gone in no time flat and they would have eaten more but I thought a can apiece was enough.

I went to the mailbox for the first time since last Sunday and, among the mail I don’t want or need, my electric bill had come. The only explanation for the increase (some 251 kwh) is that I’d left the heat up at night so Twinkle would be warm. The month before was when we had the severely cold weather, though. Makes no sense. This bill will wipe out my credit balance that’s been building, for sure.

Friday is the day I wash my Earthing Bag and remake the bed. I was tempted to try the larger wedge but I didn’t want to jeopardize a good night’s sleep before church. I decided to put that off until tonight. I did some other Friday stuff, as well.

Boy! That rain is really coming down!

BTW, I keep forgetting to report that I ordered the Bed Wedge

to go under my lower legs and help me not slide off the wedge for my upper torso. It isn’t perfect but it does help.

This morning was same as yesterday which is the same as 90% of the days, it seems. I took a picture which is a bit brighter than real life. 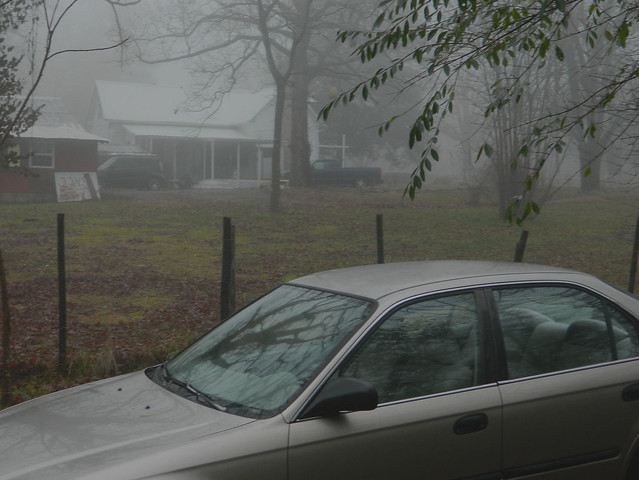 The bulletin file I got yesterday said that the sermon today would be another chapter in the Breakthrough series.

I really do like them but I can stay home and watch them better than I can see them at church. My chest has been tight and I did dread trying to hear and absorb there when I’d have to come home and watch it again to get the parts I missed.

Well, to make a long story short, I got dressed, went to the church, hauled the Computer Owner out and had her get the computer for me to bring home. She gently trounced me for making a special trip for it and said to text her the next time something like this happens. I came home and watched the video all the way through without having to back up or pause it.

The van was at Cuz’ house when I left today and gone when I got back. At least I know the animals have been cared for.

After the sun went down, I started in on the computer. Malwarebytes hadn’t been run in 267 days. It found five malicious programs and almost 1,000 potentially unwanted files. I’ve uninstalled and disabled and still have a problem with a black overlay on the desktop that obscures the themes. Searching and trying the “fixes” online hasn’t helped. I can see the theme when the computer boots up or shuts down so I know it’s there.

I need to put the rest of the beet salad away and think about going to bed. Tomorrow is another day and I’ve promised to hit the lessons again and knock out as many as possible. It’s back to the Salt Mines for me.

The First Day of 2015
Swimming