It was entirely unplanned for me to be awake when the new year rolled around. I’d gone to bed in plenty of time to be asleep but it didn’t happen. I can’t blame it on fireworks because I didn’t hear any more after that first burst. Maybe they had to get up early this morning so they got the celebration finished and flew up.

The last time I looked at the clock, it was after midnight. Reckoning time by Man’s way of doing it, at 12:01, the new year rolled in.

This morning was smooth cloudy—again. Looks like Monday is the first day we might have actual sun. Other than that, the sun is mostly obscured by a cloud both Sabbath and Sunday. That’s if you believe the Weather Guessers. Tomorrow’s rain chance is 80%.

For several years, I’ve followed an online Bible reading plan. Some time ago, I made up my mind that I will use my own Bible that has yet to have a mark in it and use a checklist. I won’t make an effort to complete it in a year. I’m going to take my time and not rush.

The new women’s devotional was unwrapped and the first article read. I’ll have to wait until May and August to read my sisters’ contributions.

I took today as a holiday. After all, it was the 48th anniversary of DS2’s birth. I’ve done little around the house after I emptied trash cans and did other bending over duties. I did fix a sort of traditional meal of a tiny sweet potato, black-eye peas, corn waffles and the greens were replaced by broccoli. It was tasty but I didn’t eat nearly enough peas to get me through the year if the going rate is still one pea = $1. 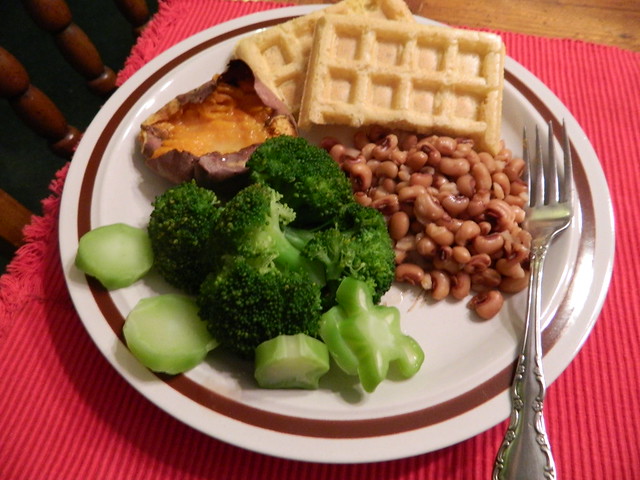 Yes, I cook the broccoli stems along with the broccoli. They are really good and there’s almost no waste when they are used, too. As for the sweet potato, I ate skin and all. The cornbread was made in my waffle maker and gives me the crust I like. My dessert was a cornbread waffle broken up in a glass and soaked in almond milk. I have enough of everything for a repeat tomorrow.

I texted happy birthday to DS2 and sent him an ecard with a gift card. I didn’t attempt calling him to sing. My cough has manifested itself today in no uncertain terms. I’d sent out ecards yesterday for New Year’s and thank you ecards today.

Soon, my vacation will be over and I’ll need to concentrate on getting the rest of the first quarter of 2015 done. THEN, it will be time to modify the templates for the second quarter. And the beat goes on.