Christmas was pretty quiet as Christmases go. I’m sure I would have been invited somewhere had it been known I was at home. However, I elected not to go anywhere. I could have been at DS2’s but they are in the process of redoing my granddaughter’s room and I would have been assigned to a cot in the living room. I’m past the point of camping out and a cot is too close to that experience. It was decided I would go there on Friday for a Christmas dinner and then on to DS1’s for the weekend.

On the Day, I got up when I felt like it and ate nothing that resembled a Christmas feast. I’d had plans to make mac ‘n’ cheese but ended up with a twice-baked potato and broccoli. Again, my choice.

DD and DS1 both called and we had good conversations. Cuz came by and fed the critters but didn’t stop in. She was on her way to the ER with her construction partner who was having a bad reaction to some injections.

I opened my gift from DD. The box contained all this: 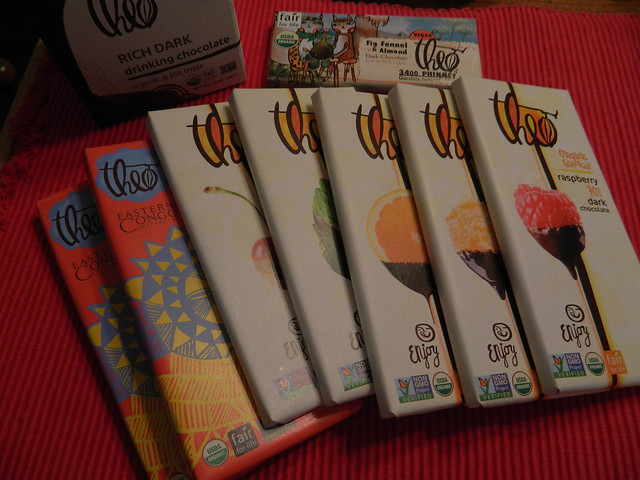 What really thrilled me was the two orange-wrapped bars at the back. Congo Vanilla Nib, my very favorite.

I treated myself to a cup of the drinking chocolate and it’s oh, so good! 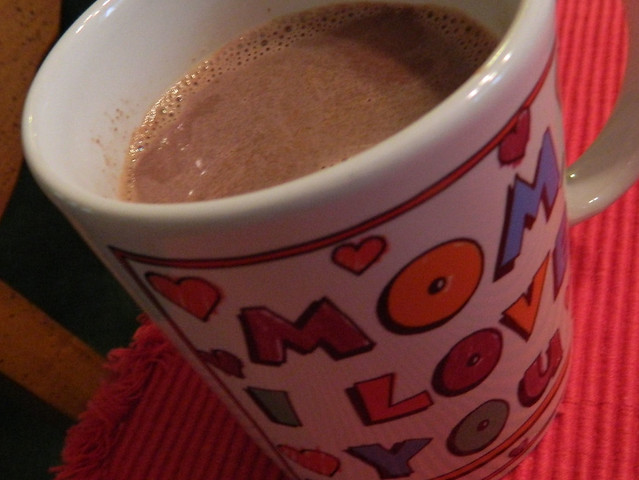 The next day would prove to be very busy so I got to bed at as reasonable an hour as possible.

We’ve had so much rain lately. It’s been soggy for so long. What a relief that the clouds were still around but they weren’t doing any more than covering up the sun.

I got a later start than I’d hoped and still had to stop by Walmart to pick up stuff for the salad I’d promised to make. My produce lady was on her way out but she stopped to say hi and give me a hug. I price matched avocados and oranges which cut the price for each by half.

Since I was headed west, it was nice that the sky was overcast. I didn’t have to deal with the sun being in my eyes.

When I got to DS2’s, I didn’t have to worry about being late. They’d been involved in getting a new cable system set up and our dinner wasn’t underway yet except for the Roast Beast (a pan of faux meat). It didn’t take long to get things ready, though, and we sat down to eat.

After the meal, we exchanged gifts. Mine was a card with a sizable greenback. Always nice to get.

It was getting on toward late afternoon when I got to DS1’s. He did most of the unloading. I was just about wiped out. I guess all the exertion caught up with me and I started coughing. I coughed and coughed and coughed until I was thoroughly embarrassed.

We had another round of exchanging gifts. They gave me a money tree with a gift card to the university supermarket. 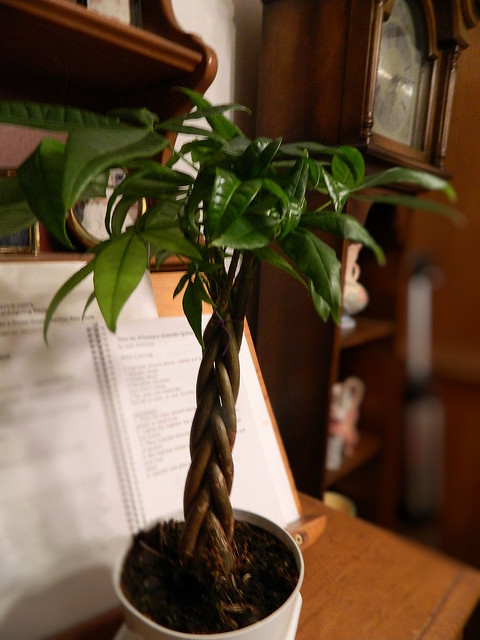 My DIL had made some delicious-smelling soup but I begged off since I’d just finished eating a big meal. She wasn’t feeling well so it was decided we would take Sabbath as a true rest day and not try to go to church. That was fine with me because I was exhausted.

Next morning, I woke to the sunrise. I tried to get a good picture of it through the blinds in the dining room but my camera is auto-focus and it wouldn’t ignore the foreground and concentrate on the sky. This is the best I could do. 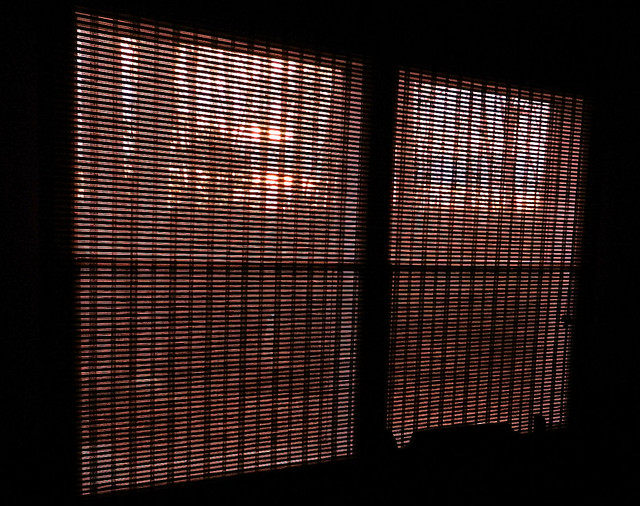 My DIL was in bed with a fever all day. I felt bad that I didn’t go in to care for her but I have to try to stay as well as possible.

DS1 is fascinated by Alaska so we spent a lot of time watching videos of the northern-most state of the Union.

I had the soup for supper along with pizza I assembled from a kit I got at ALDI when I was far too hungry to be shopping. It wasn’t half bad, though. Benji lay on the couch next to me and watched me eat. I made him happy by giving him a bite of crust now and then.

That night, it was more videos. This time, they were about the latest technology. Since I wasn’t too keen on seeing what the next thing is that can take my money, DS1 decided I should watch videos about food. His pick? Andrew Zimmern and his Bizarre Foods. After two episodes of watching him eat everything from pig’s eyeballs to scorpions, I’d had enough. But DS1 thought I liked food videos. I like cooking shows. I like cooking competitions. I don’t enjoy seeing people eat disgusting dead body parts.

Yesterday, my DIL was feeling better. Her fever had broken and she took my granddaughter on a promised trip to buy clothes. DS1 and I hung around the house until I was horrified to see how late it was getting. It was relief to find the clock on the stove was about two hours fast.

I decided I really did need to get on the road, though. I’d planned to go to Earth Fare but the rain had moved in again the night before. I’m not familiar with getting to it via the back way, either, so I left that for another day.

The girls made it back from shopping and the purchases were modeled. There were some really good buys.

Benji gets all excited if anyone touches anyone else so after my granddaughter and DS1 loaded the car, I had prayer before I started down the driveway.

My list for the supermarket was pretty short so I didn’t use the gift card. It’s good until Christmas Eve of 2015, anyway. I did want to use two coupons for free Daiya that expire 12/31/2014. They presented quite a problem. The cashier tried multiple times to key in the amount and nothing worked. Finally, she consulted with her superior and he said not to scan them but key them in as coupons, the amount and the department. That did it.

DS1 had told me about a bakery that had opened recently. He had planned to see if they had Sunday hours but never got a round tuit. Since it was on my way, I decided to stop. I’d gone to the steps when I saw a sign that said, “Closed”. Well, shoot! The cars parked around the place made it look like it was open. I was almost back to my car when a young man in an apron came out and called to me. Yes, they were closed but he had a batch of whole wheat bread coming out in a couple of minutes. One loaf would be $3.99. Two would be $5.98. I told him I’d take two. He brought the still hot loaves out loosely wrapped in white paper. He gave me two plastic bags to put them in when they’d cooled completely.

It was pure torture, smelling that hot bread in the back seat but I made my way from there to Walmart and on home.

It’s been cloudy and rainy all day again today. I haven’t been encouraged to do a whole lot except breathe. It was nice to be back in my own bed last night. Sleeping on the couch at DS1’s isn’t uncomfortable but my incessant coughing has to be disturbing to them. It’s like I told my granddaughter—it doesn’t hurt. It’s just aggravating.

I still have one gift to open—the annual one from my sister. I plan to save it until New Year’s Day. That’s when I’ll need it and it will stretch Christmas out for a week.

Are YOU Breaking the Law?
New Year’s Eve Eve

2 Responses to Some Days in the Life