Last night, I slept better than I had the night before. Two nights ago, I’d failed to take my melatonin before I flew up. Deciding I’d use it as a test, I went on to bed. Well. I was wakeful off and on all night and that convinced me to take it for as long as I need to which may be as long as I live.

Anyone who is on Facebook couldn’t forget that this was election day. Not the Big One but election day, nonetheless. I read somewhere that votes in one place were up by 340k because of the Facebook reminders. Now, I don’t know how that was determined—maybe the polling people interviewed each voter to see if s/he were influenced by social media.

I’d been completely out of bananas for days and had opened my last half gallon of almond milk. It was time to go shopping. I took a bath, “did” my hair and looked halfway presentable to sally forth.

My polling place is on the way to town so I stopped in and cast my ballot. I don’t know that it will make any difference but the Deed Is Done. One of the ladies gave me a sticker proclaiming I’d voted. I stuck it on my jacket but it refused to stay there. Outside the door, there was another on the ground. Guess it gave up, too.

At Walmart, I was waiting to get my almond milk (price match 2/$5) and when the lady in front of me picked up a carton of Silk to go with her half gallon of half ‘n’ half (I didn’t know they packaged it that way) I told her about price matching it. Later, I had one of the dairy guys looking for non-dairy yogurt and ran into a lady from one of the churches here on the mountain. She had been to a Homecoming in Alabama and, on the way back, her car caught on fire and burned up. She was by herself which would have terrified me.

The fellow was still looking for the yogurt when a couple of my friends walked up. We had a good visit and he showed me his hearing aid which looks a lot like mine.

We stood there in the refrigerated section until I was about frozen. The fellow came back with the main dairy man who informed me there is no longer non-dairy yogurt in the whole store. I told him how good the So Delicious Greek-style coconut yogurt is, like it will do a fat lot of good.

Going our separate ways, I went to check out. The cashier is a woman who likes Silk chocolate milk. I’d given her a coupon or two that were about to expire earlier this year. She was impressed with the price match so I let her keep the printout. Today was the last day for it so I wouldn’t be using it again, anyway.

I hadn’t heard from Cuz so I pulled up to her house when I got home. Seven felines were waiting for me. I went in and coughed my way through feeding the babies and then took food to five Catz, Big’Un and Bashful. Bashful let me scratch her neck.

After I carried in and put away, I heated up the half acorn squash and mixed it with the leftover congee. This picture doesn’t really do it justice. 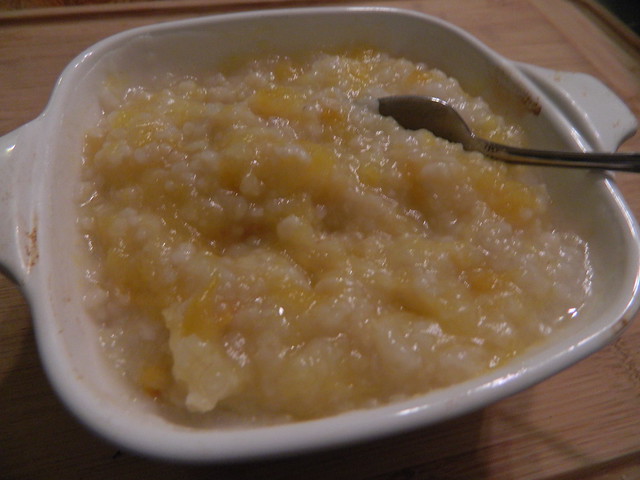 I only ate half that and put the other half in the fridge. I added coconut crystals, cinnamon and a bit more salt. The next installment will do it for the congee.

Twinkle is dozing and I’m getting sleepy. I’ve stowed all of the dishes in the dishwasher but there’s still room for more so I won’t run it tonight. I washed my housecoat and the dress I wore home from my gallbladder surgery. My electric bill came and it’s just under $100 for the month just ended. You can bet your boots next month’s will be higher.

OOPS! I Did It Again.
Winterwear

4 Responses to My Civic Duty