Several days ago, I was outside and on my way back in, I noticed a box on one of the chairs on the deck. It had to have been there since the day before because it was too early for a delivery. I picked it up to bring it inside and Big’Un saw his chance. Hidden from me by the box (it was quite large), he slipped in and was planning to make himself at home. Twinkle rose up, hissed and barricaded his way. Between the two of us, we shooed him back where he belonged.

I had no idea what was in the box. I looked at the label and it said “Anchor Hocking”. Ah, yes! The one cup measuring cup I’ve had for years is so worn I can’t see the markings on it any more. I’d googled the company and found where a woman had let them know she had the same problem and they replaced hers. I figured I’d contact them, too, and see what happened.

The cup is lo! these many years old and I’d hand-washed it most of its life. After I sent the message using the Contact info, I received an email saying

Thank you for taking the time to notify Anchor Hocking of the problem you recently experienced with your measuring cup.

Anchor Hocking strives to maintain high quality standards to produce the finest glassware available. Therefore it is important for us to hear of any problems that you experience with our product.

Our measuring cups are dishwasher safe; however we do not recommend using high power gel pacs, citric acid additives, or Lemi Shine. These products can remove enamel from glassware surfaces. The manufacturer of Lemi Shine warns against this type of usage. Anchor Hocking now has a new enamel formula that will help eliminate this problem.

If you will provide your address (NO PO Box) we will send a replacement measuring cup with our compliments. You may expect delivery within the next 4-6 weeks.

Again we apologize for the inconvenience in this matter.

I sent my address and mostly forgot about it unless I was trying to measure something. That was October 8 but here it was.

The box was ‘way too big for a one cup measuring cup. Of course, when I worked at the hospital, I’d get boxes that size that held a pack of 12 pens. I guess as long as it doesn’t weigh too much…

When I opened it, I was met by a sea of bubble wrap. I unwrapped the replacement cup. What a difference! 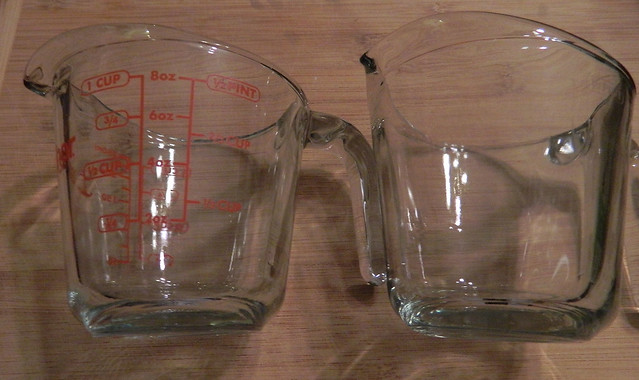 There seemed to be something else in the box. I’d told them my other two cups (16 and 32 ozzie) were okay but they’d sent those sizes, too. When I looked on the side of the box, it said something about a sample pack. Okay, so there was no mistake. 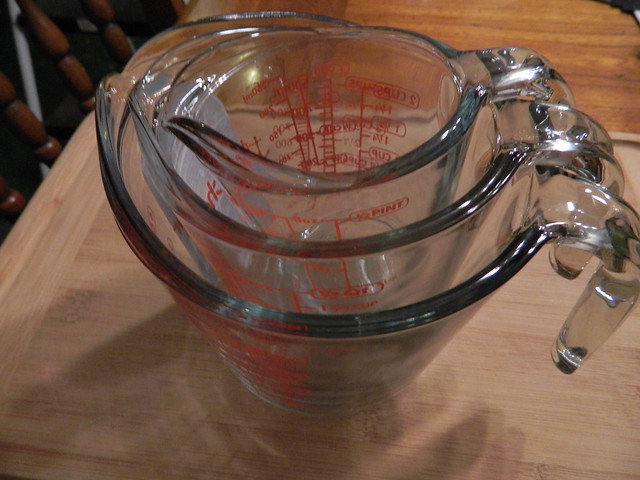 I really like the handles because they are easy to nest and store. When DS1 and his came to celebrate my birthday, they bought a set to have at home. 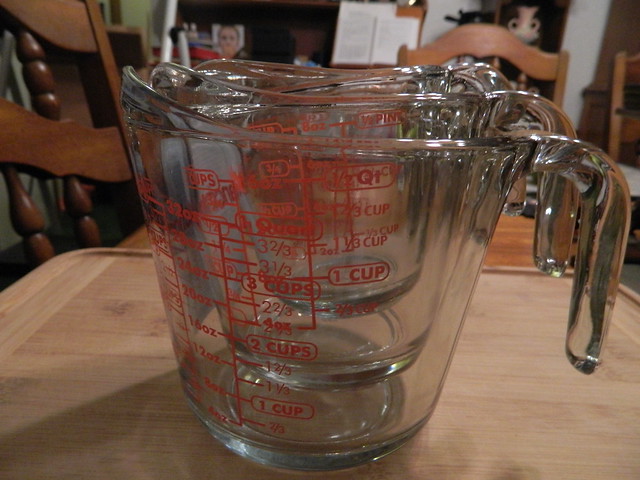 The sticker on the outside of each cup says they are for microwave and oven use. On the back in very light blue, very tiny print, it says “Dishwasher Safe. Some detergents may remove the decoration and result in etching of the glass.” As good as my eyesight is, it’s hard to read.

I’ve solved Twinkle’s food/ant situation. The reason I bought the mat her dish sits on was to make a “mote” around it so the ants couldn’t get to it. I disposed of the resident ants outside where they were supposed to be, put food in her dish and water on the mat and voilà! problem solved.

Mid-afternoon, there was a “Shave and a Haircut” knock on the door. It was my CIL letting me know he’d fed the critters. WOOHOO! I didn’t have to do the chores!

Did some more catching up today. There’s still more to do but not tonight.