Friday morning, I got up early and started preparing to leave for my granddaughter’s school. It was Grandparents Day 2014. Since she’s in the 7th grade, there won’t be many more of these occasions which is bittersweet.

I’d let Cuz know I would be gone most of the weekend so I didn’t stress over trying to feed the critters before I left. I took care of Twinkle, did what I had to do and was in the car seven minutes after I’d planned to be. Pretty good for my record.

The l o n g bridge that my sister talks about is either being repaired or widened—I know not which. In either case (or maybe neither), it is down to one lane. There are traffic lights at both ends and signs that promise no more than four minutes’ wait time. I was hoping it would still be green and it was until I was almost there. Just as I got within hoping distance, it turned yellow and was red when I got to the line. I was the first car so I settled down to wait, noting the time. Sure enough, it was four minutes before all the oncoming vehicles got across and the light changed.

I got to the school with 45 minutes to spare. No parking in the back 40 for me that day! And when I got inside, I had plenty of time to go to the bathroom and find a seat on the second row!

The singing group my granddaughter is in was practicing so I was able to hear the music before most people did and it was beautiful. I took the opportunity to take some pictures. There are 51 members in the group and only a dozen or so are males. My granddaughter is on the end of the back row. 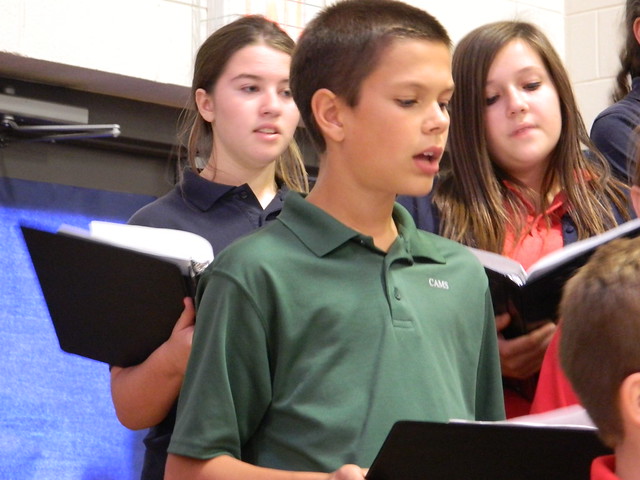 I’m not going to try to link all the pictures. If you want to see them, they are grouped in an album here.

She’s in the advanced band, as well, but she was sitting so far in the back, I couldn’t see her. It sounded really good, though. Besides my granddaughter, my sister’s grandson and my adopted sister’s grandson were in the same band.

When it was time for gymnastics, I fled to the bathroom. It was almost over when I got back. My granddaughter was leaving the stage door which was perfect because I was right beside it.

She went upstairs to get her things and when she got back, I asked if she would be calling her mom. She sheepishly said she’d dropped her phone in a creek and it didn’t work any more. Well, I’d call on mine if I could get a signal. When I dug it out of my purse, I found it was dead. We checked out at the door and went to the book fair.

After buying one book, I took her home and her mother drove up some five minutes later. She was so relieved to see us! She said she’d left voice mail for me and had called the school. Whoever she talked to there knew nothing about my granddaughter’s whereabouts so she was understandably upset.

We visited a bit with her asking if I were spending the night at DS1’s. I said yes, the next night. Well, what about tonight? I was going home. She looked surprised. I guess she didn’t realize the only reason I was there was because I’m a grandparent.

I stopped at the university supermarket to grab something to eat (breakfast had been scant and hurried) and saw a former pastor as soon as I got inside. We were catching up when his wife walked in and then one of my friends from years ago spied us and came over. I’d told the pastor I’d be back for DS1’s concert the next day and he said several of the people he’d talked to were coming only for that. It’s an every five year reunion so it’s special.

Hoping to get a sandwich I could eat while driving was unrealistic. The stack I ended up with was a two-handed one. It must’ve had a whole package of sprouts on it. It was very good but hard to eat. I sat in the car and ate half, drank a Ginseng Up on the way home and munched on some sample pretzel rings.

DS1 and I had made a date to meet at the alumni lunch on Sabbath. I was trying to get everything into the car and leave but a Clowder of Cats was threatening to trip me up. I didn’t know if they had been fed after I’d done it Thursday so I went over and made sure—more out of self-defense than anything else.

On the way, I’d listened to the last part of the church service. Turns out the speaker is someone who is friends with DS1. Later, I found out he’d mentioned DS1 in his sermon.

I found a good parking place and made it to the lunch location about 15 minutes early. I called and left DS1 voice mail saying I would be standing in the sun (gotta get that vitamin D) and I’d see him and his friends when they got there.

Here they came and I thought sure he’d seen me but he didn’t. He hadn’t checked his phone, either. I grabbed him as he was on his way inside to look for me.

There were tables set up with lasagna, salad, rolls, etc. They always have one lone vegan table so I cruised along until I found it ‘way at the end. When Mother went to her last Homecoming, she’d gotten the vegan offering and it was pretty pitiful. Not so this time! It was vegan lasagna and the rest of the table pretty much matched the others.

I tempted fate and took a lot of the salad. It was mixed greens and a good portion of it was spinach. All of the food was good and the lasagna was delicious. It had sliced ripe olives along with the noodles, sauce and vegan cheese. It looked much better than the dry-appearing unappealing regular lasagna.

My niece and her daughter came over and sat with us. By and by, her son came along, too. I’d looked for him the day before but with no luck. There were a few other people I saw that I knew but my in-laws weren’t among them.

DS1 had been urging me to eat because he was to go home, change and be back by a certain time. I was through and waiting but he was still talking. Finally, he hushed long enough for us to make our way out. I did run back to tell the lady at the vegan table how good the lasagna was. She was pleased but there was a lot left and she would have probably given me a pan if I’d taken it. I did take one serving for today.

Back at the house, I got unloaded while DS1 changed. It was decided he’d take their car and my DIL would ride over with me later. I think she was a bit nervous with this auld lady at the wheel. She held on to the Gosh a’Mighty and was embarrassed when I noticed. I told her it was fine—that’s what they’re for.

We got inside and found a short pew that we proceeded to lay claim to. We were supposed to save seats for some others who wouldn’t be getting there as early. I turned away several people wanting to join us. It was rather unnerving to sit there, just the two of us, when the others never showed.

I guess the sound and video equipment was being set up while the members were all on the platform singing snippets of songs. I don’t know what they were doing in this picture: 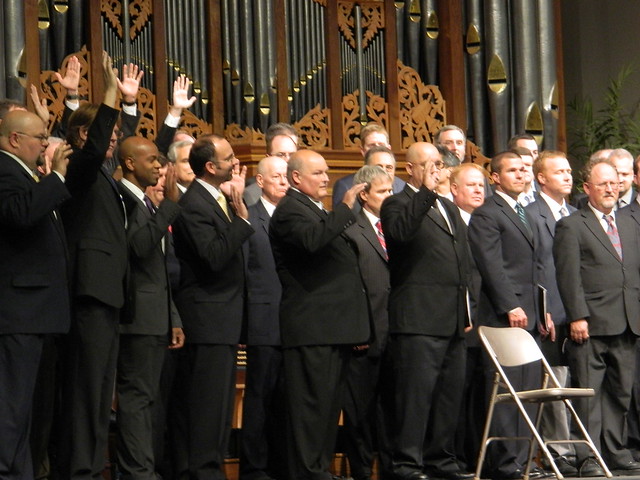 Some of the other pictures I took are here. When the concert started, I didn’t take any more. I wanted to enjoy it without being distracted.

The music was beautiful (you can watch a video of the concert here—it starts at about 11:10) but I couldn’t understand a lot of what was being said. I’ll watch, listen and find out what made people laugh. I guess my hearing will have to get worse for me to want to wear my aids to a concert.

After it was over, I saw my brother-in-law and his wife. We visited for a few minutes. Then I saw the daughter of one of our former pastors. She’d played Mother’s organ for DH’s and my wedding. I didn’t see a whole lot of people I knew but that’s not why I went, anyway.

The singers and spouses were going out to eat last night so I “baby-sat” my 19 year old granddaughter. She ate pizza, we both had a pear (I was still full from lunch) and we watched a couple of movies.

When the couple got home, DS1 wondered WHY carnivorous places equate vegetarian meals with squash and zucchini. Evidently, the company of friends was more satisfying than the food. They had quinoa, too, with no seasoning.

He was up this morning a little after 4 to get ready to go to work. I went back to sleep and didn’t wake until after 9. I was pooped.

When the others got up, I’d already had my quiet time and breakfast. They had somewhere they needed to be so they left me in charge of locking up. I got everything into the car, closed the door and left.

I saw absolutely no one I knew at the supermarket. I did my shopping and started back.

Getting home, CATS were near-rioting. I called and left Cuz voice mail. I saw DD had called so I called her back. We talked for almost an hour. I got a text from Cuz saying my CIL had been here this morning and she’d be here tomorrow.

And now Twinkle is sitting on the floor in front of me, looking expectant. I’ll go give her more food, drink my water and go to bed.

It’s Getting Closer
Trojans, Spyware and Malware, Oh My!!

2 Responses to What a Weekend!