No leg cramps last night, thank goodness. The bed felt so good and no wonder. It was 56 out from under the covers. I had to add a blanket night before last so I was cozy and warm.

The thermometer beside the chair where I’m sitting seems to be stuck on Celsius. It was, I think, 14 degrees when I got up. That translates to 57 degrees F.

When I was googling conversion tables, I found one here. I would have been pretty close with my formula but this puts it right on the money. I printed it off so I can have it handy. 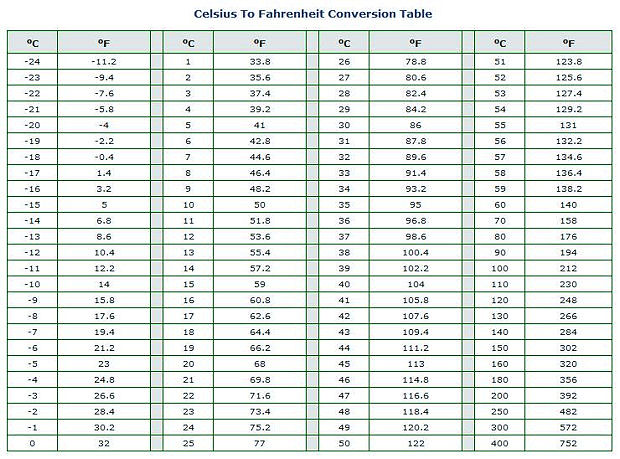 Once again, I didn’t get in the sun to fill my prescription. It was too cool and an uncomfortable breeze was blowing. I’ll have to steel myself, wrap up and go for it but I couldn’t make myself today.

My last banana went down the hatch a day or two ago so I printed off some ads to price match and set out for town. According to the man at the tire place, I should have had two new ones put on a year ago. It was his projection from months before that.

He was on the phone when I went in but as soon as he hung up, I told him I wanted him to check my tires for wear. When he’d thoroughly inspected them, he said the front two looked brand new, the back ones were showing a little wear but, since my car is front wheel drive, I’d have no problems. He had me pull around to the back so one of the fellows could make sure the pressure was where it was supposed to be.

I don’t like getting low on fuel so I stopped and bought gas. For the first time in forever, it was below $3 a gallon. And I’m still getting 38 mpg.

There weren’t many things I needed from Walmart but, with price match, I got bananas for 44 cents a lub, pineapple for 99 cents, asparagus for $1.77 a lub and Bartlett pears for 99 cents a lub. I’d called the produce manager this morning and he said they had a box of persimmons he’d save me. I asked how much and he said $1.28 each. When I told him that was a bit pricy for 20 count, he said he’d order more and try to get the price down. I bought two of them, anyway. They are a hair larger than the ones I got at Bi-Lo but I’ll wait on buying a quantity.

When I got home, the Catz and Big’Un met me. I called and found out the critters hadn’t been fed. My CIL sounded surprised that I thought he was supposed to be here.

I came in, grabbed my key and went to the house surrounded by a clowder of cats. All five Catz were there as well as (of course) Big’Un. I took care of the babies and started out with the container of cat food. If I’d had a free hand, I would have had to rub my eyes. I counted five Catz, Big’Un and one cat. That was seven altogether.

The strange one has mostly gray fur but there are hints of colors that make me think it may be from the same family. I wonder if it’s one of the two kittens Six had. It was skittish but came within four feet or so of me and would have come closer, I think, if the others hadn’t been around. The felines were all gathered around the food and chowing down when Bashful got paranoid. When it (I didn’t think to try to determine the sex) jumped, they all scattered. It was like a bomb had been dropped in the middle and they all went off in different directions. It was pretty comical. It doesn’t take much to amuse me.

Cuz called me. I gave her the news about the new cat. I’d finished up her Facebook page. After I cleared the details with her, I published it.

My friend in the halfway house called me a little while ago. He was on his way to work. After tonight, he has two more nights and then he’ll start a job in a restaurant where he’ll be working second shift. Third is about to do him in. He said he isn’t getting nearly enough sleep and I can see why. I’d hate to try to sleep days.

Twinkle is lurking, the laundry is surely dry by now and the dishes are washed. I need to drink the rest of my water and call it a day.

Three Days in a Row
What a Weekend!

2 Responses to It’s Getting Closer