My Wii announced it’s been 1400 days since we first met. That isn’t quite true. I was doing my body tests as Guest before I figured out how to make my Mii. I don’t know how long that was because I deleted the Guest account. In any case, it’s almost four years. This morning, I tested at 20. Now, if I felt that young…

Tonight, i have a splitting headache. I think a lot of it is because I’m sleep deprived. I was up past midnight last night. Part of it was watching the progress of the storms and part because I was too triflin’ to go on to bed. I’ll have to resolve that dilemma and that right early.

I called the Apple House and the torrential rain has been slowing the harvest of Fuji apples and Kennebec potatoes. The winter squash is in and I have it on my list for the next trip.

Things got better this afternoon and I was able to make a town trip without having to fight the elements. I asked my produce guy in Walmart about fuyu persimmons and he said they hadn’t been able to get either them or pomegranates. From there, I went to Bi-Lo to get some green boiling peanuts that were advertised. When I found them, they were only too gross. They should have been refrigerated but they weren’t.

On my umpteenth trip around the displays, I spied some PERSIMMONS! Disappointed with the price, I only got two and I felt like I’d shot my splurge budget for the week. They were $1.99 EACH. This is a picture from 2008 but the ones I bought are like the two larger perssies (that’s what my friends from Down Under call them). 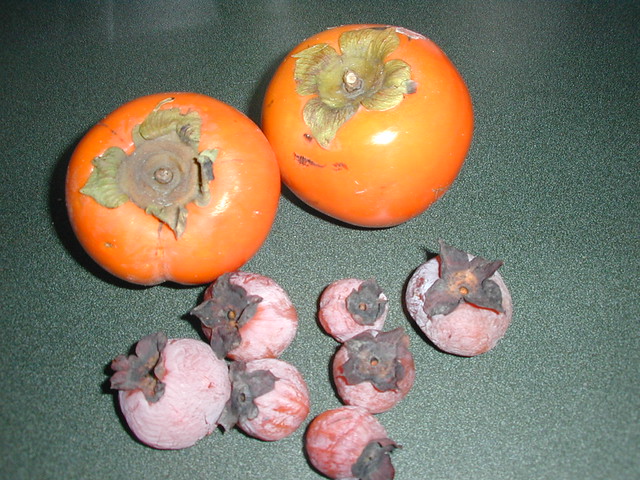 I found out the critters hadn’t been cared for until after I’d already undressed. My CIL is supposed to be here tonight. I haven’t looked out but I don’t feel up to it, anyway.

DS1 called. He’d lost his gift card and needed the information so he could redeem it. Seems their router is going bad so he has to get a new one. I was going to send him the number but I discovered I have the PDF on my computer. I attached it to an email and sent it on.

I’d been thinking we had the next quarter’s manuscript but one of the volunteers was joking about it. Today, it came in for sure so I’ll have to start on that when I’m feeling better.

I’ll have to wind this up and hit the hay. Twinkle’s been fed and so have I.

Better Late Than Never
At It Again