Yesterday was dark and gloomy until up in the afternoon. I missed getting sun but I took my vitamin D drops.

Along with little to no sun, the wind has been kicking up since mid-week. Remember this? 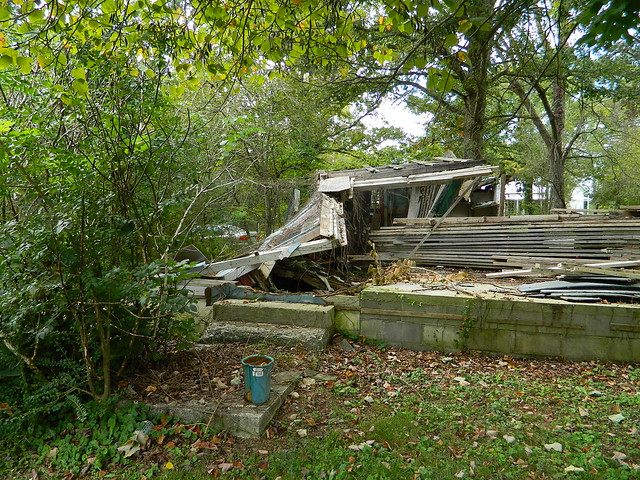 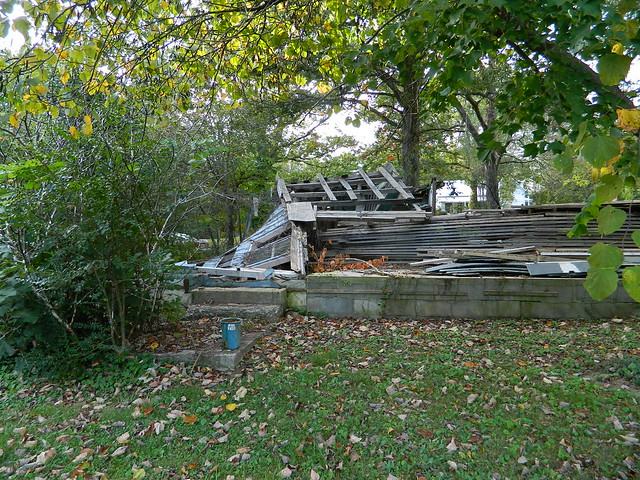 I’d heard a crash yesterday and I guessed that’s what it was. I have no illusions about ever having a decent front yard before I die. I just hope some of The Ruins doesn’t block my driveway. If I ever have a medical emergency, that could be really bad.

It would be nice to know what I did to precipitate the half hour coughing spree I had last night. Usually, I’ll cough a few times after I go to bed and that will be it until morning. Well, I coughed a few times and then a few more. They got deeper and more pronounced. After throwing up mucus twice, I finally settled down and went to sleep.

This morning, I was moving slowly. I wouldn’t have gone to church at all if I hadn’t promised to take some song books to one of the ladies. When I got to church, second song service had begun. There was no congregation participation. The song leader had picked out all of the selections. I warbled along as best I could but I didn’t feel inspired.

I stayed until after the offering and children’s story. When the speaker started speaking, I followed along as best I could but it’s hard for me to understand him. He’s a very nice man but he speaks with a pronounced accent and I have to be feeling very good to be able to concentrate closely enough to make out the words. My hearing aids hear but they don’t translate.

About 11:40, I got up and left. I had a headache and wasn’t feeling at all up to par. I let the lady know I was leaving so she’d be sure to get the books. I’ve stressed they are to be taken care of since they are all out of print and I do want them back.

Pulling into the driveway, I went directly to Cuz’ house. I didn’t know if they would be home later or not but I wanted to get the critters fed and out of the way before I came home.

It was cold enough this morning (outside temp was 42 and inside was 10 degrees “warmer”) to close windows and turn on Dr. Heaters. It had warmed further to 62 inside when I got home. I pulled on some sweats and went out to get some sun for 15 minutes. One of the Catz and Big’Un thoroughly wiped themselves on my pants.

Back in the house, I was tempted to eat some ice cream. I brought a pint carton in ‘way last week and have yet to open it. As cold as it is, though, I figured I’d wait for a warmer day. They can’t be over already. Feeling it was the better part of wisdom, I opted for hot chocolate.

A nap would have been nice but I managed to only doze in my chair. I am hoping for a better night tonight.

Years ago, I bought a timer from Flylady. It’s a Sunbeam (except for the name it looks exactly like this) and I think I paid something like $20 for it. It still works but it will only time up to (as it shows) 99 minutes and 59 seconds. Period. It does nothing but time one thing.

Well, progress has been made and I’ve been looking at timers. I finally settled on this one. It costs half as much and does several times more than the old one. I’ll keep the Sunbeam in the drink holder of the camp chair and use the other one in the kitchen or the bedroom or wherever I plan to be.

The new one will time up to four different things at once. As well as timing for up to 24 hours, it’s a stopwatch, too. It has a clock (I have it set on military time) and it shows the month, day and year. Now, if I ever lose track of what day it is, I can look at it and know—if I remember.

If anyone saw me in my present garb, they might think I’ve already lost it. My sweat pants are fleece on the inside and, as fleece eventually does, it has pilled. The little balls are hard and scratchy and after I’ve had them on for a few hours, they are intolerable. I took them off, turned them wrong side out and put them back on. Appears crazy but it isn’t.

Twinkle’s had lap time but she’s contentedly curled up in her chair on her heating pad. I hope this is just a cold snap and not winter already but that’s the way it’s been the past couple of years. It seems we’re down to two seasons. Summer. Winter. No spring or fall. It’s already 44 in the valley and the predicted low is 38. BRRRRRrrrr.

2 Responses to Farther Along