I hadn’t participated in TBT on FB (Throwback Thursday on Facebook) for a long time so I decided I would remedy that today. I’d laid out a few pictures recently and selected two of them to scan.

In this one, I was probably two or three years old. I don’t think it was taken when we lived in the Old Home Place in town so I was, no doubt, closer to two. 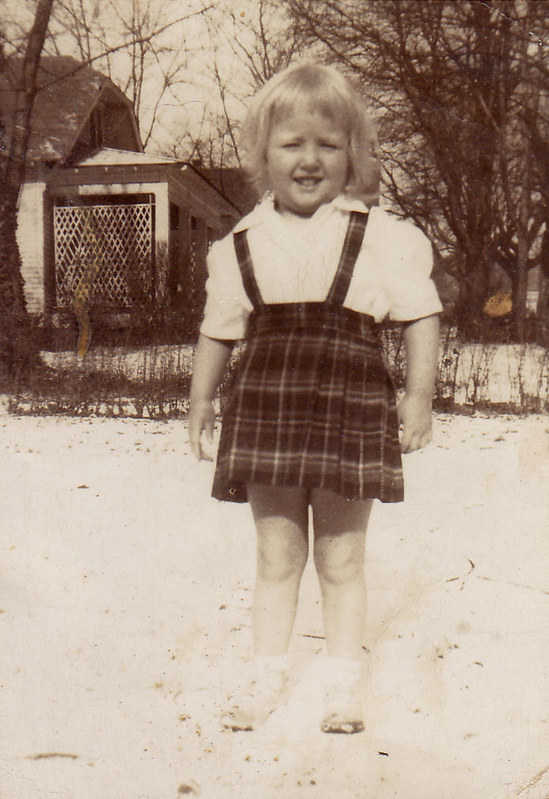 On closer inspection, I see that my bangs weren’t the straight across ones that Mother would cut. When I was very small (maybe just a bit younger than I was in the picture), I can clearly remember standing in front of a fireplace with a pair of scissors. I cut my bangs off as short as I could manage. They were probably growing out here.

The story is, Daddy had entered me in a Beautiful Baby contest. Mother was against the idea. He saw me through the doting father’s eyes. She was more of a realist. When I cut my bangs, he was heartbroken and, according to Mother, he cried. He just knew his little girl would have won. Maybe she gave me the scissors? In any case, he went to his grave believing his baby was really the most beautiful.

Years later, after Daddy had died and we moved every little whipstitch, we were back on the mountain. A stray dog came along and I fed him. People would drop animals (they still do) and expect them to be taken in. I was the one who was taken. This dog was special. He was a mutt but he was a nice dog. I named him Chico. 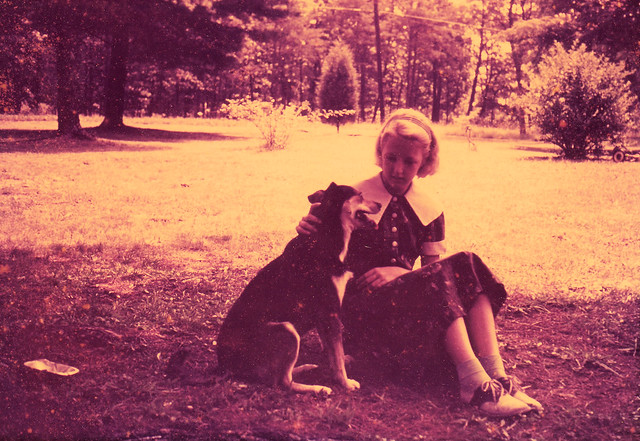 We didn’t have a lot of money so he ate what we did, mostly. Now and then, Mother would buy him a can of dog food and he’d get a treat. Once, Mother had made a split pea loaf. It wasn’t delicious and Chico got most of it. He took up residence under Mother’s chair on the lawn and, every now and then, we were treated to an aroma that defies description. He’d roll his eyes and look guilty.

If we went anywhere, when we got back, he’d jump around us in a big circle and yell, “Mama! Mama! Mama!”

He lived with us until one day, he got sick. There was no money to take him to the vet. My brother-in-law, a doctor, looked through his bag and gave Chico an injection of antibiotics. It didn’t do any good. After a day or so, Chico went off into the woods. My brother-in-law went to find him. By and by, he came back carrying his collar. Without a word, he handed it to me. I knew that Chico was gone. There were other dogs but none of them was as loved as Chico.

Well, this morning, I was busy at something and glanced at the clock. It was past 11:30 and I automatically thought it would be time to go out in the sun soon. Then I realized it was noon by the clock, not by the sun. I waited until about 12:20, grabbed my camp chair and the timer and went out to get my vitamin D. I set the timer for 20 minutes and largely ignored Big’Un’s overtures.

The wind was kicking up today and it’s kept the temperatures on the cool side. I was in a soup kind of mood so I cooked up a pot of barley-mushroom soup. I have enough left over to be tired of it by the time it’s gone.

It hasn’t been quite the usual chore to feed the sugar babies. My CIL failed to turn off the a/c when he was here and it’s easier to breathe in there now. Today, it was a chilly 69 so I boosted it up to 71. I probably should turn it up higher than that but it can get so stuffy, it makes me feel like I’m going to smother.

Twinkle seems to be getting skinnier. I hope it’s my imagination. I feed her all she’ll eat and her appetite is good. I wish I could give her some of my propensity for putting on the weight.

My sister is back in business with her phone and Internet. Seems there were some lines that needed replacing. It’s a good chance she’ll have better service now.

What Time Is Noon?
Farther Along