Ever since I couldn’t get tomatoes at the produce place because it was closed, I’d been thinking about going to the one out here on the mountain. I still had four of the little tomatoes left that Cuz grew and one slice of the big tomato I’d bought a week and a half ago.

Cuz texted me this morning that she’d be stopping by the house so I wouldn’t have to feed the critters today. I warned her there would be five Catz and another cat to feed. She hoped Twinkle had gotten out. Nope.

It was a cool morning so I still had my housecoat on when the doorbell rang. It was Cuz. And she was holding this: 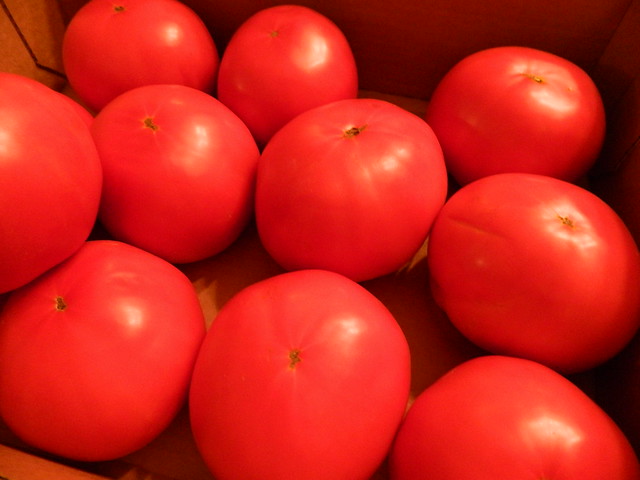 She’s been buying tomatoes from a farm near here and thought I might like a “few”. The reason for her stopping by was to pick up more jars for canning soup and spaghetti sauce. She’s been making tomato juice, too. That brought back memories.

When I was a freshman in highschool, I came down with scarlet fever the last day of Christmas vacation. For weeks, my throat was terribly sore. Mother had canned quarts of tomato juice the summer before and she’d heat it up with salt and lemon juice. That felt so good going down. I lost my whole second semester but gained an appreciation for Mother and her hard work.

Speaking of Mother, I put on one of her style of summer dress but with a T-shirt underneath. The other day, I ordered another one but not from the same company. It came today and is about stiff as a board. It will probably take several washings to get the sizing out.

Something lit a fire under the HTML person so I’ve gotten busy and worked on the helps. I have 1-11 done and will do the rest tomorrow. We should squeak through before the 09/15/14 deadline. Guess an inch is as good as a mile.

For supper, I had the last four little tomatoes and then two slices of a big tomato on a sandwich. Nice I don’t have to set out to buy any time soon. As good as that big tomato is, the little ones tasted much better.

Twinkle has been jumping up on things today. I had to get her off the dining table at one point and she was on the sewing machine another time. I don’t care about that but when it comes to where food is supposed to be served…

A Pet Peeve
Done and Done