Sometimes when I’m grocery shopping, I’ll pick up a promising avocado. The first thing I check is the stem. If it isn’t still there, the avocado goes back in the bin. Without the stem, air gets to the good stuff inside and things start on a downhill slide much more quickly.

Once, I was looking over the display of beautiful avocados in Walmart. On closer examination, almost ALL of them had had their stems recently removed. I freaked out and went bonkers on the poor produce guy closest to me. He insisted he was innocent and I believed him. There was another fellow who acted as if he didn’t care and I always thought he might be the culprit. He was later fired for throwing tomatoes against the wall in the storage area.

I cut one of the Fours today and it was a nice ‘un. What a relief! I’ve had halfway garbage far too long.

I’m wondering how my friend’s trip went today. It was a long one—roughly 400 miles. Google says it would take more than 6 hours in current traffic.

When I went over to feed the critters, there were five Catz and one huge gray feline. It has faint markings and the tip of its ear is gone making me think it’s, possibly, fixed. I put the food out for the Catz and, to keep it away so they could eat, I put a little pile a couple of feet away. The Catz don’t seem scared of it like they do the Neighbor Cat. It ate all I put down except for a couple of pieces that ended up in dirt. It looks like it hasn’t missed a meal so it probably belongs somewhere else. It isn’t shy. It rubbed against my legs. I didn’t try to pet it since it doesn’t need encouragement. I doubt Cuz would be delighted having another mouth to feed.

I didn’t get a picture of it but it sort of looks like this: 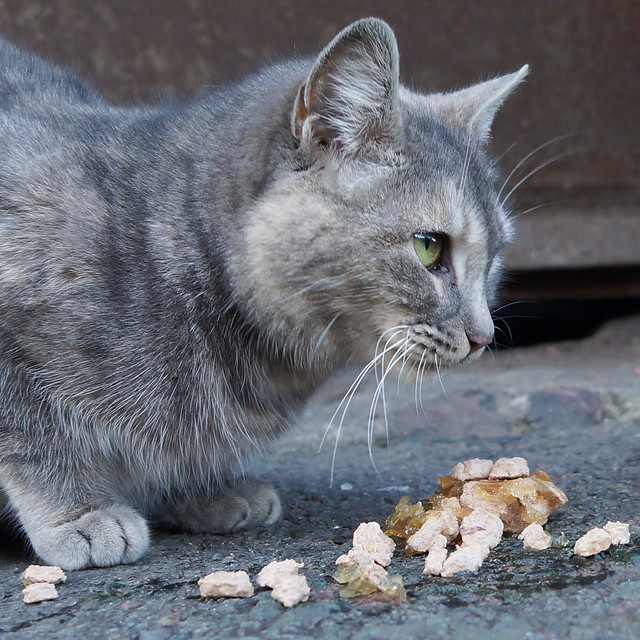 The phone rang and when I picked it up, I got a fax sound. I kept saying hello and finally hung up. It rang again and that time, it was my sister. She laughed and said she guessed she couldn’t send me a fax. Well, no. I have to have the phone line hooked up to my printer and the fax turned on. If I keep the phone line hooked up, the printer rings but the handsets don’t. So…I don’t keep the printer hooked up.

She wanted to send a test because she’d written an article for the women’s devotional. She figured she’d fax it in if she could get her fax to work. I told her it would be better for her to attach it to an email and send it that way. Much more readable and they wouldn’t have to run it through OCR to convert it to text.

I walked her through the process of a Save as to put it in .doc format, then attaching it to an email. She wanted to try it on her own so we hung up but she soon called back. She’d left out the Save as. I walked her through it again and I think she got it that time. She’s since written down the steps. If she’d worked at the hospital and attached multiple files to emails five days a week, it would be second nature.

DS1’s 50th birthday is Friday. I went through stacks of pictures to find one to make him a card. Don’t worry. This isn’t spoiling the surprise. He never reads my blog. If I had a vlog, he might watch that but since I don’t…

I’m sleepy. Twinkle’s eaten enough that she’s down for the count but she’ll wake and be at my door if her dish is empty. I’d better go fill it NOW.