Yesterday, I was in the process of getting ready to go to town when the phone rang. I couldn’t get to it in time to answer it (the handset closest to me was dead) so I waited for the voice mail to come through. It was my niece. I called her back. She wanted to let me know my only remaining brother-in-law has been transferred to hospice care. It’s sad but he hasn’t had a life since my sister died.

After we talked for a few more minutes, we hung up and I assessed my situation. There was so much to do before I could leave the house, I decided to put off my trip until another day.

Later, I checked the tracking on my printer ink when the usual time for a UPS delivery passed with no package showing up on my deck. It stated it was delivered and “Left At: Met Customer Woman”. I called my CIL (who isn’t the customer OR a woman) and he checked the back steps. Yes. There were two packages and both were to me. I was relieved they were there but it did not make me happy.

Why would a delivery person lie about where the package was left? Maybe he/she wants to lose his/her job? I can’t be the only person in this situation. I emailed UPS and got a nice note back saying they will contact the local office about the problem.

The mailbox held a letter from Discover saying the most recent investigation has been completed. If I had any questions I could call. Call, I did. The rep couldn’t tell me any more than what was in the letter. I wouldn’t be liable for any charges, etc., etc. When I wondered how it had happened, he helpfully said, “Someone got your number and made the charges online since they didn’t have the card.” Well, DUH!! That was especially obvious since everything ended in DOT COM. I thanked him for his time and hung up.

Since I wasn’t going to town, I might as well use the last avocado. Out of the most recent dozen or so, I’ve had one completely good one. The rest, I’ve had to eat around the bruises. I had to throw away at least half. 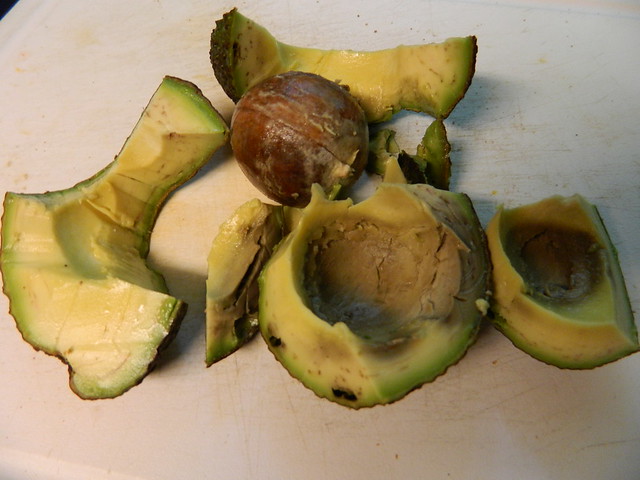 My nephew-in-law posted a picture showing avocados in different stages of ripeness.

I like to buy them when they look like #1 and are hard enough to use as a weapon. Then I can let them ripen to the stage I want and keep them in the fridge until I use ’em. That hasn’t been possible for a long time.

The bulletin secretary sent the files for today. I usually get them on Thursday but maybe she waited until she could get 95% of the information. I plugged everything into my template. Hmmmmmm. The opening song was my least favorite in the whole hymnal. I won’t say which one so don’t ask but it’s not musical at all and is very repetitious. Then the speaker was via a DVD—or so it said. Now, I like to hear speakers in the flesh. DVD speakers have to be excellent to hold my attention. Maybe a hologram would help though I doubt it. I looked him up on youtube and saw that all of his sermons were VERY long. What happened to the advice, “Short sermons will be remembered far better than long ones.”?? And “There is a serious waste of vital energy in long sermons.” That’s true for the preacher and the congregation.

Debating with myself, I decided I would take today as a visiting day and go to the church out here on the mountain. It’s much closer than the one in the valley. I’d found out who was speaking. It was my pastor and he preaches relatively short, memorable sermons. My mind was made up.

This morning, I decided I’d format a couple of the helps files after I’d had my quiet time. When I put in the anchors, there’s a specific formula I’m supposed to follow but one of them had me in a quandary. I spent far too much time on it and it was too late to go to the church I’d chosen when I’d had breakfast and gotten ready. I’m on Tommie Time and they’re on Daylight Saving Time. So much for that. It was either stay home or go to the valley.

Getting to the church, I saw some of my friends on the porch (the building used to be a house). We talked a bit and the wife was mourning that I no longer play the organ. She loved the old songs. I told her to have her daughter (present) look up “Rodeheaver” on ebay and Amazon. The books are out of print but they are available used. The daughter wrote down the name and I went on in.

There was still room on the back row so I sat down.

Many of the preliminaries were done away with today to make room for the L O N G sermon to follow. I don’t know if the file had been captured from youtube or if it was streaming (though the Internet access went away when the school closed). At any rate, the speaker’s voice gave me a headache. I did everything I could to compensate with my hearing aids and finally turned them off. Maybe the volume was turned up too loud, period, because it still grated.

The sermon went on and on. Ten minutes after he said he was closing, I got up and left. When I looked the sermon up on youtube, he must’ve wound it up as I was walking to the car. Then again, maybe not. There are several different videos with that title and speaker. Some are shorter, one is longer.

I pulled up to Cuz’ house so I could get the Feeding of the Critters done before I came home. I planned to get a pint of ice cream out of the freezer when I was done but it had started raining huge drops when I took the Catz’ food out. I pulled around and down to my house. Thankfully, I had my umbrella and was able to go from the car to the deck without getting completely drenched. The downpour didn’t last long

The headache continued on and my neck started hurting. I (as Mother would have said) flailed around until something popped. It still bothered me. I did wall pushups and something else popped on #5.

I drank my water and ate my lunch (too much). The apple pie filling was still in the fridge and I had to face the fact that I wasn’t going to use it since it’s ‘way too sweet for my taste. I took it over and put it in THEIR fridge. As long as I was that close, I might as well get the ice cream. When I went into the garage, here’s what was on top of the freezer:

Back in the late ’80s, I ate many a cinnamon raisin biscuit from Hardee’s and bought two sets of the California Raisins.

I guess Someone has been poking around. Now, if that Someone would find my birth certificate…

Late this evening, it started raining again. Routinely, August brings dry weather and the grass gets brown and crunchy on into September. It’s still lush and green. Hopefully, the threat of forest fires will be greatly diminished.

My headache has subsided somewhat. My neck is still sore. Twinkle has been running through the house and acting half her age. Sometime this month, she’ll turn 17.

Another Line on My Resume
Sunday, Sunday