Not having to get up often was a plus last night. I did have dry mouth which was surprising seeing my missed water was from yesterday morning. I’ll have my allotment when I go to bed, though, so I figure the path to the bathroom will be well trodden.

My friend from church called to see if I needed anything from the university supermarket. I gave her a small order plus another for the book store.

I was busying myself working on the lesson helps when I heard what I thought was a squeaky bird. It would squeak, pause, squeak twice, pause, then squeak again. Over and over. Then another one answered it. It was rather entertaining until I started wondering if the washer alarm was on. I’d put in a load of clothes but didn’t see how any of them could cause it to go out of balance.

On my way to the utility room, I had to pass by the indoor-outdoor thermometer. THAT was one of my squeaky birds. I went to the bedroom and, sure enough, the other squeaky bird was on the table by my bed. I pushed the “set” button on both and the squeaking stopped. Then it started back up again.

The thermometers are quite ancient so I had a time finding my model online. There were several people who had reported “beeping” that wouldn’t quit. None of the answers seemed to work with mine. I finally got one of the sensors, changed the batteries and the squeaking stopped.

An hour or so later, it started up again. I got the sensor from the end of the house and worried the back off. Changing the batteries didn’t help that time. The squeaking chorus erupted as soon as the batteries were in. I tried pushing the transmitter button. Didn’t help. I took the batteries out of both sensors and the squeaking stopped for good. Finally.

My hair had gotten a good workout during all that. I feel like I didn’t get a whole lot done today except fool with those danged things. It may be they are past using for anything but indoor thermometers. At least I have a new one that works for both indoor and outdoor.

To add to the Symphony of Sound, Weatherbug started chirping this afternoon. I checked and there were severe thunderstorm warnings for my neck of the woods. I went ahead and fed the critters. The male baby had made it very clear he doesn’t like carrots. I cleaned his bowl and gave him sweet potatoes instead.

Along about 4 p.m., this is what the sky looked like. 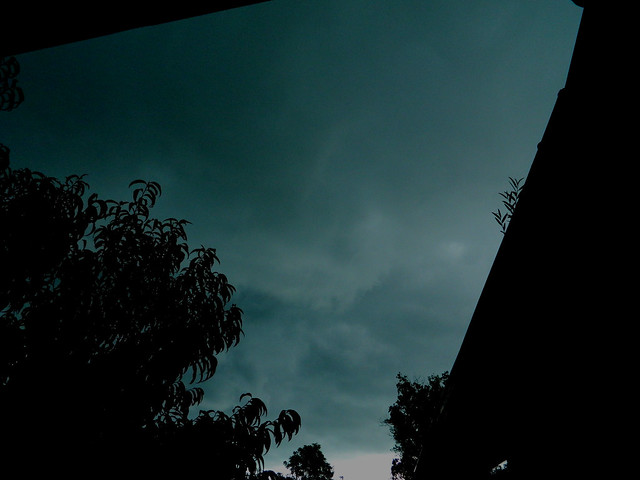 I was glad I didn’t have to battle that to take care of Animals.

There wasn’t much of a storm here. It threatened and it did rain some. The wind blew which helped cool things off a little. Across the valley and over another mountain, there was hail that was larger than quarter-size. I’d just as soon not see that.

I’ve opened yet another can of Twinkle’s food. She has two unopened ones. If I have to, I’ll write a check to replenish her supply but I hope my new card gets here before that happens.

My friend in Federal Prison emailed that the arrangements have been made to move him to a halfway house next month. His brother will pick him up and they’ll have a certain amount of time to get him to his destination and checked in. He’s getting all excited over the prospect.

My DIL pled ignorance when it came to setting up a Facebook page for her other half so I got that done. I don’t know if it meets with their approval and, right now, I really don’t care.

Am I a Carnivore?
Peace and Quiet