Well, let’s get current business out of the way. I had presented a riddle for your enlightenment/entertainment and offered (in exchange for the right answer) applause on tonight’s post. The riddle was “When does FOUR plus SIX equal FIVE?” It took Lila two guesses to get it right and even though Terry gave two answers that were almost identical, she got it right. No one else attempted it. I don’t know if that has to do with my expertise at crafting a riddle or if no one else cared. Anyway, APPLAUSE to Lila and Terry.

Now, here is a picture to illustrate the answer to the riddle. 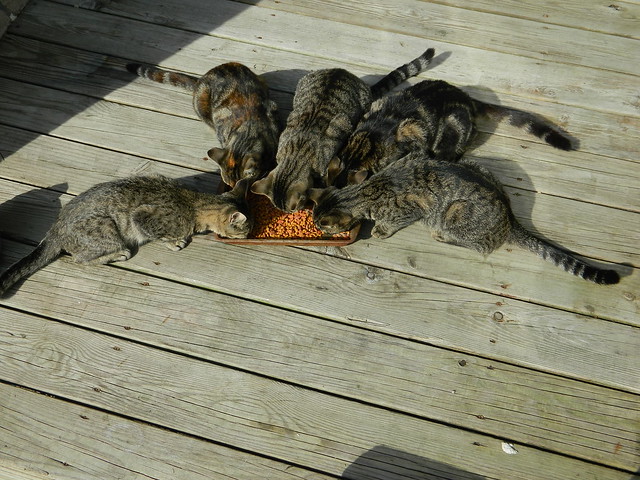 I’d gone over to feed the critters yesterday afternoon and the usual four Catz showed up as well as Six. That made five Catz at the food tray. Six is more independent (which is why she is the only one not spayed) and doesn’t always come around. I think the cat lying down in this picture is Six. I know it’s the most skittish of the lot. As for the other cat, my cousin could tell you which one it is but I can’t remember which is which. 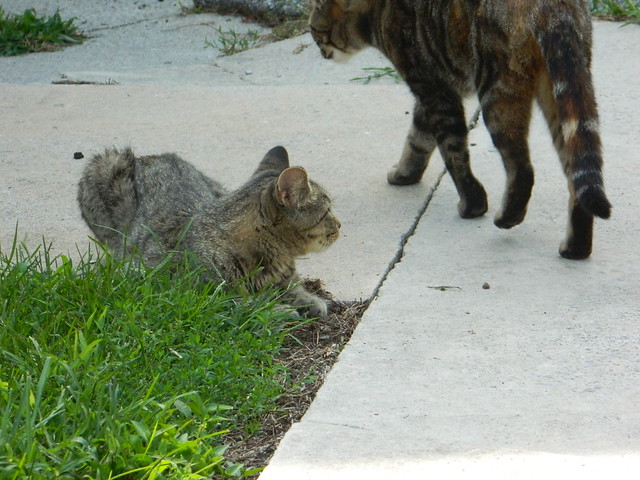 So, there you go.

My forever friend and academy roommate posted this picture and tagged another of our friends and me. I think I’m the one on the right.

That was just about all the excitement for yesterday. I wish I could say the same for today.

It started out okay. I noticed my cousins were home so I pulled the car around and talked to them for a minute or two before I left. Cuz assured me they’d be here long enough for us to catch up so I went on my way.

I made it to the church with my left hearing aid serenading me with the “doodle-de-do” that signals the demise of the battery. Before I went inside, I sat in the car and replaced both batteries. The right one still showed some juice but I knew it would be talking to me soon. When I got inside, the class was in session.

Going in and taking my seat, I could hear just about every word. Last week, I’d cleaned the stems and even though nothing visible came out, maybe they were plugged with something I couldn’t see. Even the organ sounded better today.

When I got home, I had a phishing email supposedly from PayPal. I went to web mail (which I use only occasionally) to forward it to spoof@paypal.com. That’s when I saw the first of several other emails.

Oh, no! The ox was firmly in the ditch. I called Discover and after giving everything but my shoe size, I was connected with a representative. There were five charges made today (only three were showing up online, though). Two were for tanga.com (never heard of it), two were for paypal.com and one was for rhapsody.com. Were any of those transactions mine? NO! I hadn’t used my credit card today. Do I have a PayPal account? Yes, but I never use my credit card with that.

Could any other member of your household have made the charges? It’s me and The Cat. Do you have another card that might have been lost or stolen? I have one card and it’s in my possession.

I told the rep I’d had the same thing happen not long ago and I was getting concerned about using my card. She was quite alarmed that this is the second incident in a short time period. The upshot is there will be an investigation and I asked to be informed of the outcome. Once again, my number has been canceled and a new card will be sent in “four to six business days”. So there goes any serious produce buying I might do when I go to town next. I guess bananas will be it. I’m down to about a quarter of a tank of gas but I’ll have to hope it stretches. I can write a check at Walmart but I’m not going to do it where I buy gas. Twinkle’s down to five full cans of food and part of another one.

Besides the emails, I had a voice mail message from Discover and another call that was a recording asking about the activity. When I pressed 2 for no, that wasn’t my charge, I was forwarded to yet another rep. She said the automated system hadn’t caught up and to ignore the call. Thank goodness I have zero liability. The charges that are showing up total $352.12. I guess whoever the thief was tried to set up two PayPal accounts with my card as backup. The charges for it were $1 each.

After all that, I was pretty much shaken. Thankful that Cuz was home, I went over. She was doing some repairs on the garage. Dusting off a cushion, she put it on a chair and had me sit. I told her my latest tale of woe and then we visited about other things. She took me into the house and showed me a project she’s working on. I promised to wait until all the components were finished before I take pictures.

By that time, I was getting hungry. On my way out, she asked me if I had any tomatoes. No, I didn’t. (I’d planned to go get some at the produce place here on the mountain yesterday but I let the day slip away.) She had some in a bag she’d picked this morning off the two plants she has at her construction partner’s house. I was going to take a couple but she had me take all of them. They’re small but I ate one and it’s the best tomato I’ve had this summer—and the first bit of produce I haven’t had to buy.

Well, here I am. There’s been more excitement today than I wanted or needed. Sabbath is supposed to be very different.

Riddle Me This
Verrrry In-ter-est-ink

2 Responses to It’s Like Déjà Vu All Over Again