It came through last winter and froze everything in sight. Then, after all the “winters” had been accounted for, it came through again. I woke up in the early early this morning and had to put another blanket on the bed. This is after only needing one thin one the night before and that not all the time.

Honestly, I’m beginning to think it has something to do with the coming and going of my cousins. They were gone during the extreme cold, they were here for a day or two of the second one and today is the first full day they’ve been gone and the invasion is here.  They bring the heat and take it with them.

I was down to my last mango so I got the bright idea to blend a banana with it. Remind me not to do that again. The mango is so good by itself but kind of un-delicious with the banana. 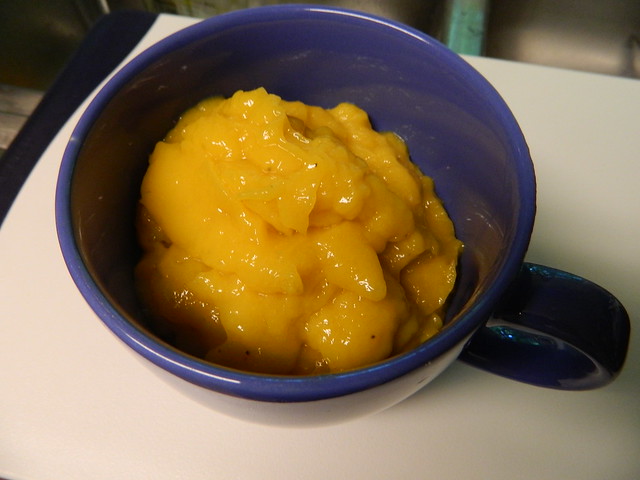 Of course, this is a Cavendish banana. I’ve been doing some sleuthing and what I used to eat as a kid growing up was the Gros Michel or Big Mike. It has a much better flavor than the Cavendish. As a matter of fact, the Cavendish is known in some parts of the world as the “hotel” banana. In other words, it’s the commercial variety. Once in a very great while, I can get the Big Mike at the university supermarket and it’s such a treat! The way I know it is by taste and that taste is unforgettable.

According to what I’ve been reading, the Cavendish is being wiped out by a fungus. It may force distributors to import the better, more tasty varieties that aren’t quite as plentiful. If I had money to burn, I’d pay a visit to the Asian market and get some Thai bananas. They are creamier.

DS2 called today wanting me to help him with a web site. Seems he needs to supplement his income. I advised him to start with a Facebook page and go from there.

I haven’t worked on the lessons at all today. That’s unusual. I’ve been doing at least one a day but I couldn’t get myself into the mood. I’ve had a bit of a headache, anyway. Not pounding. Just there.

Three Catz showed up to be fed today. I texted my cousin and she said all four are still around and five if Six is there. Figure that one out.

I have no problem finding Twinkle. She’s right there whenever I open the refrigerator. And so am I.

THAT’S Better
Riddle Me This