All was well when I got up but an hour or two later told a different tale. I went into my bathroom and it became very evident that a skunk had been disturbed somewhere close by.

I posted, “I do believe something has tangled with a skunk.” My neighbor across the street said she hoped it wasn’t one of her dogs. I still don’t know what or who but it wasn’t Twinkle or me and that’s good. 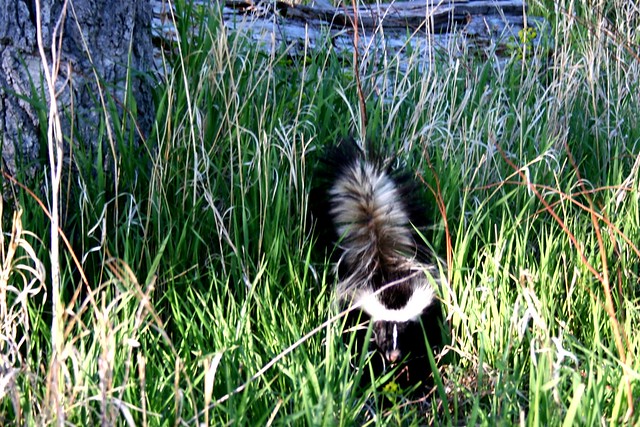 The peach situation hasn’t been a good one and that’s frustrating. They were so sweet last year but I think the ones I got were picked when they were much too green. Of the nine, I’ve eaten three. One has been passable but the other two sour. None of them were ripe enough to eat today.

When I’d said I was going to have to put flea stuff on Twinkle, I discovered I’d used the last vial. I ordered some more and it came yesterday. I put it on her this morning and, for a wonder, she stayed still for the application. She’s spent a lot of time (more than usual) asleep today. I suppose it’s because she didn’t have to wake up and scratch.

My former roommate got me into watching a program on Netflix so I haven’t gotten quite as much done as I might have. We send recommendations back and forth and don’t always see eye to eye on the results but that’s okay. We didn’t agree on everything in academy, either, though we always stayed friends and will until the end. If you’re up on texting lingo, she qualifies as a BFF.

We were reminiscing a bit and I mentioned an old boyfriend. I hadn’t really thought about him that much for quite some time. I googled his name and one of the options came up with “obituary”. He died suddenly almost two years ago. I guess that qualifies as The End of an Era.

My avocados were past giving away so I salvaged enough to make some chocolate mousse. I ate a little this afternoon and am hoping it doesn’t keep me awake tonight.

I haven’t been completely lazy otherwise. I’ve done some routine things around the house and another lesson is mostly completed. I even got started on lesson 5 but I think I’ll leave the rest until tomorrow.

My CIL should be happy. One of his fondest memories is the patch of skunk cabbage that grew near where he grew up. It’s a smell he enjoys and more power to him!