The commode in my bathroom hasn’t flushed right for over a week. Oh, contents would go down eventually but not with (as DD would say) a swoosh. At first, I thought it was stopped up. Using a plunger with these toilets is very tricky because there’s a groove going down the back of the bowl that defeats a tight seal. I ran the Cobra down but came up with nothing. Pouring a bucket full of water into it resulted in the satisfying “swoosh” that meant it wasn’t clogged.

Then I thought the lime buildup had closed the holes under the rim which resulted in a reduced flow of water. I had some stuff that’s supposed to dissolve such deposits so I poured it directly into the hole in the tank and let it set the rest of the day. Did it help? NO!

Yesterday, when I pushed on the handle to “flush” it, it suddenly dawned on me that it had to go down a long way before it pulled the flapper up. That wasn’t right. I took the tank cover off and, sure enough, the chain was ‘way too slack. I got a twist-tie from the kitchen, bunched the chain up, tied it off and voilà! it now flushes as it should. I’m not a plumber but I have experience in plumbing now.

That wasn’t my only project. I did three loads of laundry since I was gone a lot of Thursday, cooked quite a bit, cleaned and generally overdid. When bedtime came, I was worn out. My back and legs were tired (along with the rest of my body) so I soaked in the tub.

When I went to bed, it was right off to sleep. I slept well until about 2:30 this morning when I woke. I was awake for the next several hours and when I did slip off again, it was to strange dreams. I guess I was still tired because I was driving with my eyes closed because I couldn’t open them. I was going more by listening to see if I was hitting gravel on the left to tell me I needed to steer more to the right.

Then, DH was back but not really. It didn’t look a whole lot like him and he was living with a woman next door. She was concerned that he wasn’t taking his medication and was acting abnormally.

It was back to driving again but this time, I had my eyes open. By the time I woke, I’d seriously overslept and I was still tired. Sometimes dreaming can be work.

My activities yesterday sometimes involved muscles that haven’t been used enough and I’ve been sore today. Considering the lateness of the hour and the way I felt, I decided not to try to venture out. Twinkle and I have had a nice day at home.

The first thing I saw when I went into the kitchen this morning was another Imperial. Maybe there’s an announcement somewhere? “Notice: Best Places to Land.” 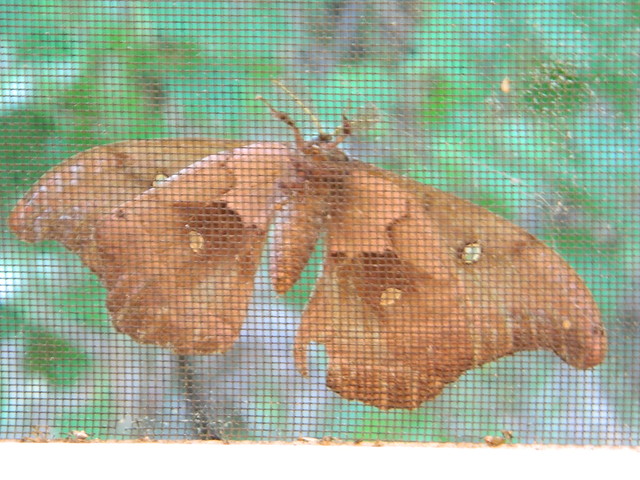 There was one ripe peach so I peeled it for breakfast. I didn’t realize it was bottom-side-up until I started to prepare it. 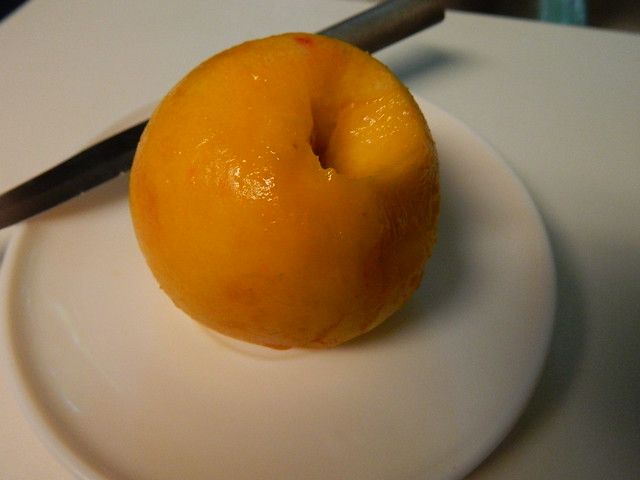 Fruit flies had been munching on the blossom end of the peach and I’d cut the affected part out.

When I cut it up, of course I had to add some blueberries. 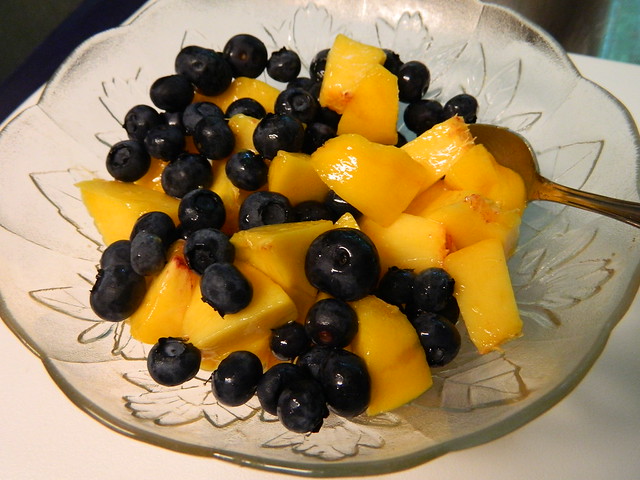 The peach had a very good flavor and was really juicy.

My next meal was leftovers from yesterday. I’d shucked and fixed the corn like Mother used to and it is YUMMY. I have enough left for another meal or two. Same with the okra and one of the green tomatoes. Oh, and I had some dark chocolate Coconut Bliss for dessert. It’s super good but the So Delicious isn’t quite so high on the fat grams and is just as tasty.

I tried and tried to find the error(s) in the 4th quarter file but was unsuccessful. I’ll have to leave it to the HTML person.

Twinkle is sacked out. I should follow suit. It’s Saturday night and this is as wild as I’m gonna get.