Yesterday morning, I had all sorts of trouble with the Wii. The balance board refused to work—even after I changed the batteries. Re-syncing it didn’t help, either. It was only after I turned the console off and back on again that it would connect.

Considering the bareness of my cupboard and the (still) greenness of the peaches, I got ready and went to town. My first stop was at the beauty shop. The tattooed/pierced/multi-colored hair lady cut my hair again and I do believe she’s getting the hang of it. I had her go shorter this time. Hopefully, it won’t be over my ears and down my neck quite as quickly.

Roaming around the store (it would probably be equal to covering several blocks downtown), I waited until almost time to check out before I looked in the freezer case for Dippers. There wasn’t a single box. One of the associates was stocking the shelves so I asked her for the ones that were being saved for me. She seemed to know what I was talking about and disappeared into the back. A few minutes later, she came out carrying this: 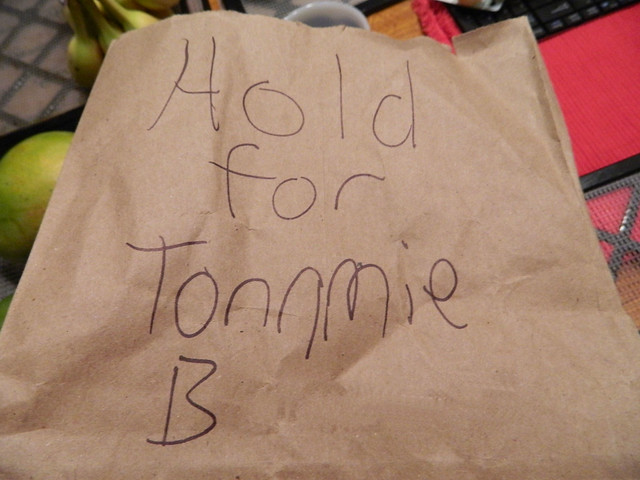 I was so glad I’d saved those for later rather than asking for them last time.

I’ve learned to separate my regular purchases from the ones I’m price matching by putting one of the little stick things between them. I had my printouts all ready (except for one I failed to get out). Everything went swimmingly until I handed over the ALDI ad. The cashier signaled for a supervisor. What the?? She explained that people had been using out of state ads to get lower prices. WHEW!! I was so glad I caught that one yesterday and printed off the right one. The supervisor gave her okay and I swiped my almost-brand-new credit card.

Next, it was to Bi-Lo where I bought a T-Mobile $10 refill card so I can keep my phone service for another year. Walmart doesn’t seem to have T-Mobile cards any more. Wednesday, August 6, is my anniversary date. It’s easy to remember since the 6th is also DH’s and my wedding anniversary.

I tried, unsuccessfully, to talk myself out of going to the produce place located on the next block. I bought half a dozen ears of corn, two green tomatoes (uh-oh) and some okra.

After I put the perishables away and drank my water, I set to and fixed my supper. I “ate the garden”. It wasn’t MY garden, but it was someone’s. The menu read thusly:

I planned to eat a little package of Dole Banana Dippers but I didn’t have room.

It’s been not quite so cool today. The low this morning was 59 here on the mountain and 58 in the valley. Twinkle is lurking rather than occupying her heating pad. Guess I’d better go feed.