My bedroom was a toasty 80 degrees when I went to bed last night. I’d taken the comforter off since there was no way I’d need it. Tossing and turning, it was impossible to nod off. I’d taken melatonin but it will only help KEEP a person asleep, not PUT a person to sleep.

Lightning had been flickering so much it looked like heat lightning but Weatherbug chirped a severe thunderstorm warning. It swooped in quickly and there was lightning flashing and thunder crashing all around. 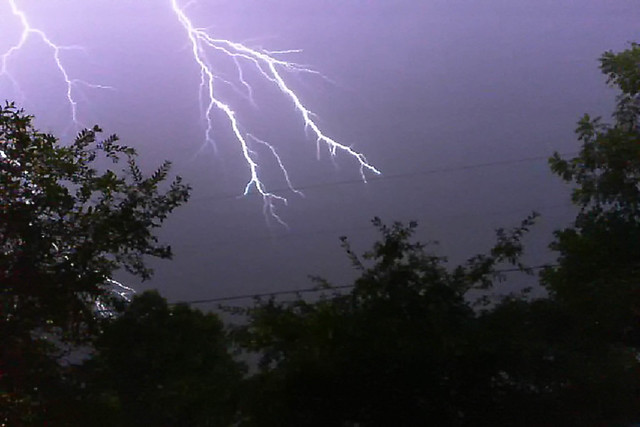 I was sticky and sweaty and wanted to get up to soak it off in the tub. No way was I going to do it with all the fireworks going on. It had moved out close to midnight so I got up and immersed myself.

At 7:31, I got an email from my sister saying she couldn’t access my blog. Then Genese’s daughter, Kimberly, commented on Facebook that she couldn’t, either. I sent merm an email and it came back up later. I don’t know if she reset the server or if it reset itself. At any rate, here I am.

It’s been cooler today, thank goodness. One of my Facebook friends got up only to open the front door and find leaves and branches in his face. A large tree had been split in two during the storm. It was a real doozy. I don’t know of any damage around here, though.

I’d toyed with the idea of going to town but I have plenty of food so I ditched it until later in the week.

Before I exercised, I fixed the greasy beans to cook. They aren’t as full as what I bought at the same place last year but they still have a good flavor. Since I had some leftover vegan mac and cheese, I didn’t cook any potatoes on top of them. I’ll probably do that tomorrow.

Twinkle’s scratching. I hate to put flea stuff on her but I probably should. I’ll try to remember to do that before I go to bed.