I am so sleepy, I am having difficulty staying upright. It isn’t even 8 o’clock yet TT and while it looks almost dark out, sunset is still nine minutes away. Twinkle is watching me. Surely she can’t be out of food again.

The first course at breakfast was two mangoes and some blueberries. When I got the already washed berries out of the fridge, the unwashed carton fell on the floor. I dreaded looking down but when I did, I saw it hadn’t popped open. That was definitely something to be thankful for. Here’s part of my breakfast feast. 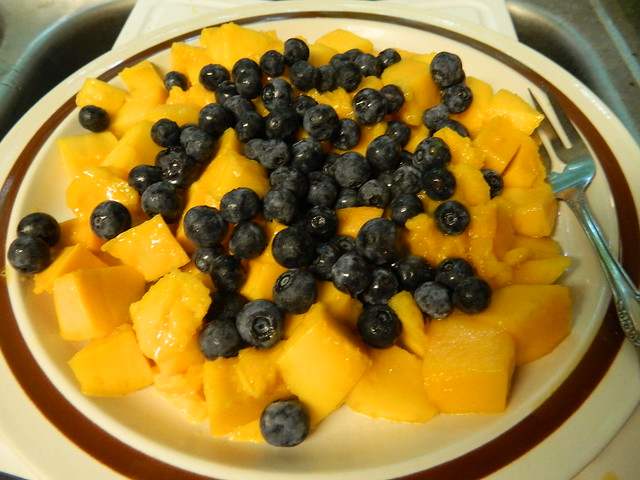 Twinkle’s been getting her toenails hung in my purple shirt. I tried to file them down this afternoon but had to give it up pronto. Guess a visit to the vet will include a toenail clipping.

I texted Cuz to see if they left this morning and she texted me back from Macon, GA, where they’d stopped for breakfast. I asked if my CIL would be bringing the rigged a/c and she said yes. She had put it in the back of the van before they set out.

Not long after that, my CIL got home. I didn’t bother him but I took the two gallon jugs I’d managed to scare up and fill with water (leaving space for expansion) out to the freezer. It wasn’t as much of a job to make room for them as I thought it would be.

Another hour or so later, there was a knock on the door. It was my CIL with the Redneck A/C. I didn’t take a “before” picture. I filled a bowl with soapy water, added a bit of bleach and went to work. It’s definitely not a thing of beauty but I hope it will be a joy forever. This is after I’d cleaned it up. 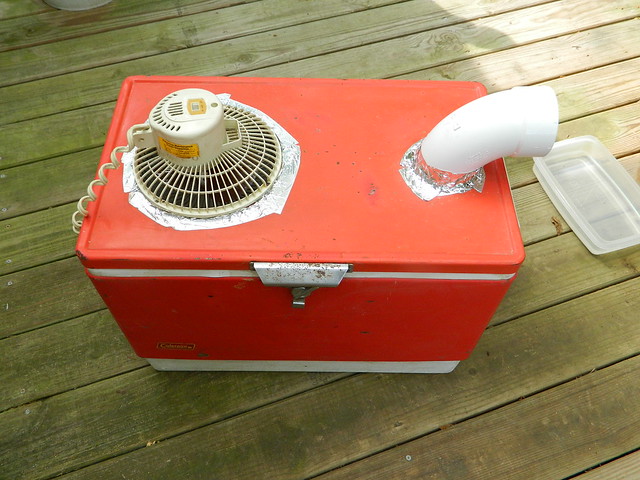 I figure the water in the jugs should be frozen by tomorrow and we’ll see how it works. I need to find more jugs so I can swap them out and keep things cool when the weather gets hot. The clip is gone off the fan. I had it over the kitchen range last winter to spread the warmth. Guess I can get another little fan for that.

Speaking of hot, it finally warmed up some today. It got up to 81 in the kitchen and 79 in the living room. I haven’t checked the bedroom lately.

DD and her boyfriend were on their way to meet merm, merm’s girlfriend and merm’s family (all but her brother) for brunch. DD was able to get a reasonably good signal so we visited for about 20 minutes. She’s very busy with her new job and is exhausted at the end of the day. Guess that can translate to job security? I told her to take pictures and post them on Facebook. So far, I’ve seen two.

I made a list of four things that need attention regarding the 4th quarter lessons and emailed it to both the HTML person and the editor. The editor wrote back her appreciation but I’ve heard nothing from the other party. It would be nice to get started so the crunch won’t happen again.

Guess I’d better go see about Twinkle’s food situation. Her litter box has been cleaned out and the laundry is done. I’m going to turn in soon. My schedule is more “early to bed” than it used to be.

Which Winter?
A Five Mouses Tale