After my day from you-know-where, it wasn’t terribly surprising that I’d wake in the night with horrendous cramping in my right leg. It had gotten quite a workout while I was in traffic. My left leg, not so much. I could shift into neutral and not have to keep the clutch pushed in. Unless I used the emergency brake, there was no way I could get around braking. The alternative would be tricky when it’s bumper-to-bumper.

I tried rubbing my leg. Didn’t help. Then I tried getting up and walking around. Didn’t help. It was pain pill time and I hate that. Not only do I dislike taking them, my store is getting to the almost zero mark. Without a real need for them, another prescription is out of the question.

Yesterday morning, I woke after 9 a.m. That’s another strike against taking pain med. I like being able to sleep but I don’t like being knocked out.

Besides feeding the critters, there were other “have to” things to do. Twinkle’s cat box was to the point that the litter was almost all disintegrated to mulch. I took out the nuggets and flushed them, then prepared to take the rest outside to dispose of it. I guess there was enough residual effects of the knockout pill that I almost lost my balance going down the steps. I couldn’t grab hold of the handrail because I had a full cat pan. My angel must’ve kept me upright because I, somehow, didn’t fall.

Someone had given feedback on the lessons and the fact that the new Bible Gateway redirect wasn’t working the way it should. The editor sent out an email saying, “If these could be changed, some folks would be grateful. 🙂 ” So…guess who changed them? Thankfully, it was an easy fix. I’ll go back and do the past lessons, too, but not tonight.

The combination of the sleep interruption, intense pain, The Remedy and its lingering sleepiness kept me from getting much done.

Eating well was one thing I did, though. This was my appetizer for supper. 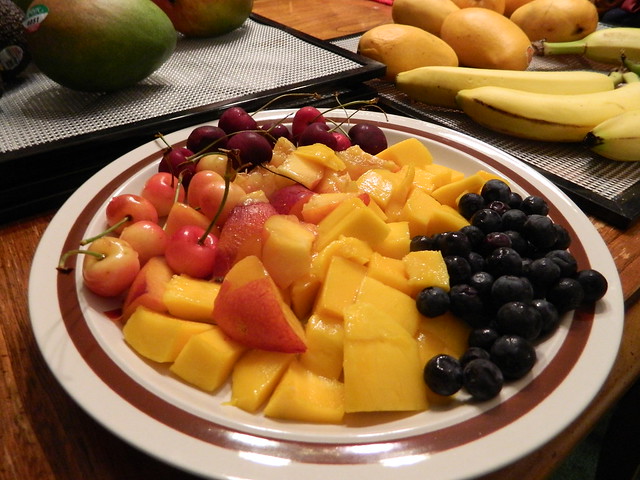 A dinner plate full wasn’t an ideal choice for the last meal of the day. I was in bed by a little after 10 TT. I’d had my usual 16 ozzies of water. Between that and the juicy fruit, I lost count of how many times I had to get up to go to the bathroom. If nothing else, I got a lot of exercise.

Thinking about my possibilities for church, I decided it would be a good idea to stay in. I was planning to take some fruit down to Genese and I’d let that be it for today.

Twinkle had some lap time while it was still cool enough for us both to tolerate it. Then I took a shower, got dressed and set out. My umbrella was hanging on the front door but it was so bright and sunshiny outside, I knew I wouldn’t need it.

When I got into the valley, it started sprinkling. Then it came down harder. Soon, it was a hard rain and it was still too much to get out in when I reached the parking lot.

Sitting in the car, I looked at the sky. It didn’t look like it was a brief shower. Then it occurred to me that I could pull under the roof that’s over a little “loading/unloading zone” for the residents.

Parking illegally, I went in. Genese was awake and seemed to be in better spirits. She commented that I looked better than I had the last time I was there—more relaxed. I said I hadn’t played the organ this morning.

She had good news about her children and her children’s children which probably had a lot to do with her mood. That always helps.

I told her about my leg cramp and she said the girls on the basketball team swear by pickle juice. I’d never heard of such a thing. When I got home, I looked it up and sure enough! there were lots of results when I googled it. So…next time, I’ll try that. If it works, it will beat the livin’ daylights out of being groggy the next day. I’ll be sure to report the results.

I’m sleepy. Maybe cutting down on the amount of fruit will let me sleep tonight. I can hope.