My cousin made it over here with the weed-eater before I’d taken my shower. I cleansed my body and got dressed. When I went outside, she was finishing up the mowing. Her glasses were covered with clippings.

She carried off a lot of boxes and three bags of trash I had ready to go. I gathered up some more stuff and took it out. The living room looks bigger without Twinkle’s collection of boxes. I left her favorite.

I mentioned to her (my cousin, not Twinkle) that I needed to borrow her hedge clippers or pruning shears or something to get rid of a lot of the overgrowth that was making me feel like I was in a jungle. She grabbed the pruning shears and came over. Making short work of a lot of the stuff that was threatening to smother me, she did more work in an hour than I could have done in a week.

Grabbing the poison vine, she pulled it from the house while I was protesting that it would make her break out. She says she isn’t allergic. I hope she’s right.

DD called and we talked for right at an hour. I hadn’t really heard from her since she moved. That had turned out to be quite an adventure. She was to get the key to her apartment on Sunday so she asked the movers not to come until the following day. Someone at the moving company dropped the ball because the movers showed up at 8:30 Sunday morning. She still had the rest of the packing to do and she wouldn’t get the key until almost noon. Hustling around, she was able to get everything done and the move is now history.

Her Internet is iffy and her cell phone gets a signal now and then. It’s surprising she doesn’t have better service. She thinks it has something to do with the terrain but Seattle should have coverage everywhere.

Along about 7 p.m., I looked out. Behind the house, it looked as though it was almost dark. The shadows were getting long in front and this is the neighbor’s yard. There was a cardinal in one of the trees but it flew just as I was ready to take the picture. 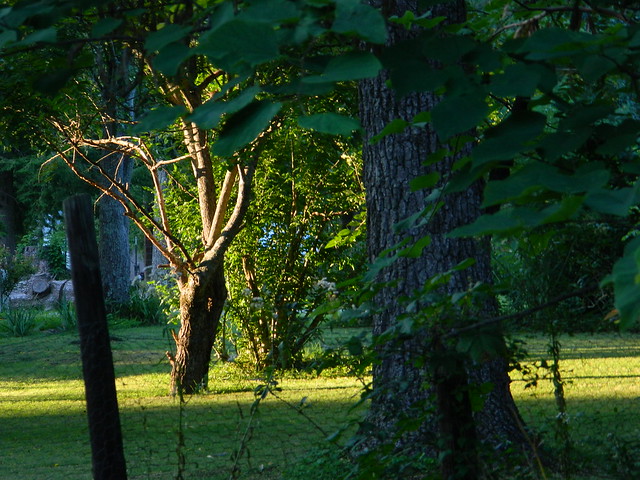 The second set of templates is done (I think) and I uploaded them. Since the mobile Bible Gateway is all but gone, the editor wanted the links to point to the default and a specific version. The HTML expert has done the former but not the latter. As for me and my house, I’d rather pick my own version but that’s me. I’m just waiting to see how it plays out.

Twinkle has about eaten me out of house and home already today. I opened a can of food last night and gave her a dab to go with what was left of another can. She’s down to half the new can and will probably have that gone by morning. With her winter coat gone, I expected her to look skinnier than she does. Maybe she is gaining weight.