So…there’s been quite a mix of weather here today. Most of the morning, it was overcast with a thick layer of clouds. It was positively quite dark. However, here’s what my Weather Clock had at the time indicated which is Tommie Time. 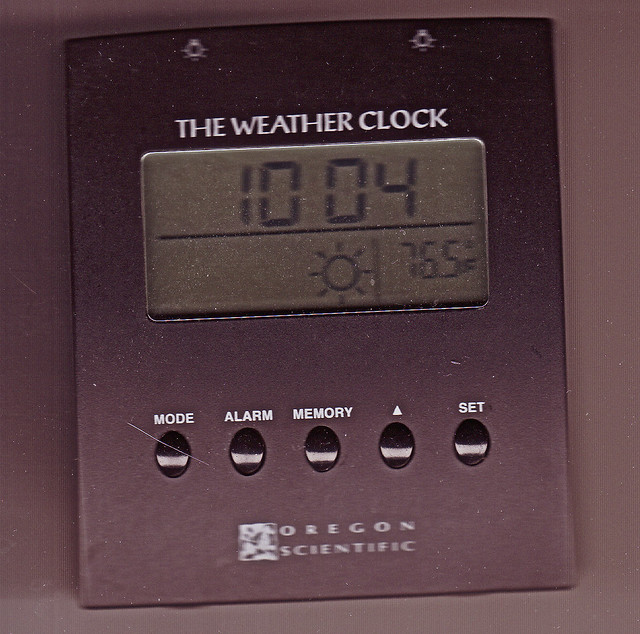 Later in the day, it had an abundance of clouds when the sun came out. Maybe it’s on the schedule of “just wait 20 minutes and it will change”? Then, this afternoon, the clouds did roll in and it poured down rain for a little while. Strange.

This morning, it occurred to me that DS1 is very interested in who is related to whom and which branch of the family tree did so-and-so swing from. Years ago, DH’s brother made copies of a tattered typewritten genealogy of the family and gave one to each of his siblings. I took the binder apart and proceeded to copy the copy. Sixty-three pages later, I was done. They are all put in order and now I need to get a folder.

My cousin texted that my CIL would be here today. Sure enough, he was but he’d forgotten his house key. He didn’t ring the doorbell so the only way I knew he was at the front door is because my Watch Cat went on high alert. I was still in my housecoat because it was cool in the house (for a change). I think he was embarrassed but he seemed less so when I told him his other half had done the same thing.

I did laundry today. With the hot weather, Mother’s dresses really need to be washed every time they’re worn. I looked at some other house dresses from the same company but I don’t like them as much and they cost more. Not the ideal combination.

Today marks my ninth anniversary of vegan eatery. It’s also Roger Haeske’s birthday, the perpetrator of Savory Veggie Stews. The man is 47 years old and looks much younger. He’s been very successful at eating an optimal raw vegan diet and it shows.

I’ve worked on the last lesson off and on and have had to get creative in solving some of the problems. If nothing else, I learn a lot while I’m editing.

DD took off work yesterday so she could get her moving done and a lot of her settling in. Better her than me. 😛